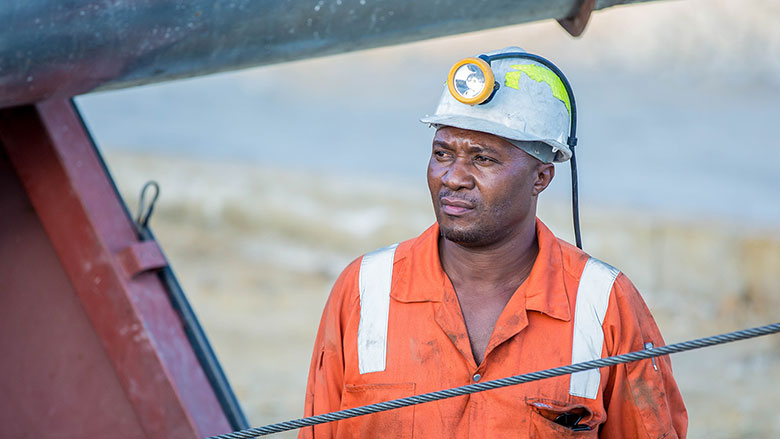 Through the Tanzania Energy Development and Expansion Project (TEDAP), 576,000 people, including 125,000 women, now have access to electricity. The project’s off-grid component also stimulated private sector-led development in renewable energy and resulted in one of the strongest and most transparent enabling environments for small power producers in Africa. They would not otherwise get connected to the national grid within a decade or longer.

Tanzania is a low-income country, with a population of about 51.8 million in 2016. About 73% of the population lives in rural areas. Despite a high rate of growth of 7%in the past decade, poverty reduction has been slow, with approximately 12 million of citizens living in dire poverty while a significant portion of the non-poor population lives just above the poverty line and risks falling into poverty unless proper measures are in place. In the next fifteen years, Tanzania’s labor force is expected to increase from 20 million in 2014, to close to 50 million by 2030. Access to affordable, reliable and efficient electricity supply is vital for the increased productivity needed to generate jobs, enhance the living conditions of Tanzanian households and support the attainment of the country’s socioeconomic goals.

Tanzania has outlined its medium-term objective of becoming a middle-income country by 2025. They also aim to reduce the share of the population living on less than $1.90 a day from 48.8% to 4% or less by 2030, and to improve the living standards of the bottom 40% of the population. This would require lifting nearly 20 million Tanzanians out of poverty in the next 15 years. The World Bank has committed to supporting Tanzania in this mission, with a current portfolio of 28 national International Development Association (IDA) projects including five Programs-for-Results (PforRs), and two budget support operations with net commitments of about $4.2 billion. Tanzania also participates in seven regional projects with a total commitment amount of $550.8 million. Key sectors in the national projects include: transport (22%), urban development (20.5%); energy (13.5%); education (10%); and governance (10). In addition, a number of non-financial advisory services and analytical products have provided inputs to policy formulation and institutional building, while informing the design of our financial assistance.

Access to affordable and reliable electricity is vital for Tanzania’s attainment of its socioeconomic goals. With only 36%of households currently having electricity, the World Bank is supporting the government through a program aimed at expanding access to affordable, reliable and modern energy; and ensuring operational and financial sustainability of the sector.

" The resources saved from resorting to generators have been used to improve other areas of operation, for example, hiring more people and increasing the number of work shifts. "

While the government has also made strides on development of new infrastructure, delivering natural gas from the South to Dar es Salaam to generate electricity, the national electric utility, TANESCO, still struggling with substantial financial difficulties, related to the payments of arrears accumulated in 2011-2012, when expensive liquid-fueled power plants were contracted. Support provided under two development policy operations (DPOs) the gas-to-power program is aiming to achieve a key medium-to-long-term cost reduction measure. The completed large gas transmission pipeline, connecting the nearshore/onshore producing fields at Mtwara and Songo-Songo to the new 150MW Kinyerezi I gas power plant in Dar es Salaam has provided cheaper fuel source for power generation.

The construction of a 225km overhead 400kV double-circuit backbone transmission interconnection line between the central towns of Dodoma and Iringa, forming part of a 632km transmission network, connecting the mining region of Shinyanga with agricultural part of the country in Iringa, has been completed, thus securing supply to agriculture, industries and domestic users while promoting the sustainability of the government’s plans to increase overall connectivity to 50%by 2025.

TEDAP has delivered electricity access to more than 576,000 people through construction and rehabilitation of electricity networks in Dar es Salaam, Arusha and Kilimanjaro. Generation capacity (MW) of renewable energy constructed under TEDAP increased from six in 2010 to 22 in 2015. The project has supported the provision of financing and strengthening of the regulatory environment for small power producers (SPP). These SPPs are a critical part of efforts to stimulate private sector-led development of renewable energy in remote rural areas which cannot get connected to the national electricity grid within the next ten or more years. Six of these SPP projects are now in operation selling power to the national utility agency while one small hydro SPP is selling electricity exclusively to local consumers.

Thirty additional SPP’s projects are at different stages of development. These private-sector focused off-grid initiatives have provided a bedrock for the government’s Rural Electrification Expansion Program, which should assist the government in making access to electricity part of everyday life for at least 500,000 households, schools, hospitals, agricultural and small business owners in numerous villages across the country.

With 22MW of SPP-generated renewable electricity now being sold to individuals and to TANESCO, the public utility company, and an additional 7MW due to be commissioned soon, a vital foundation has been established for the Government’s ambitious rural electrification program.

Gas production has increased and gas is now available to all power plants in the Dar es Salaam area, eliminating the need for costlier liquid fuels and significantly reducing the cost of generation. The need for expensive, liquid-fuel-based emergency power supply contracts, which in 2012 and 2013 exceeded 300MW, has now been eliminated. The cost of electricity supply was lowered from about TZS262 per kWh in FY2012 to TZS 229 per kWh in FY2015. 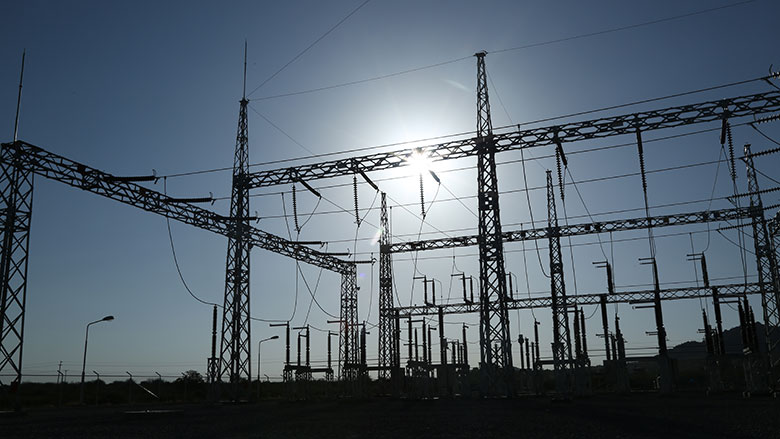 Completion of the installation of new infrastructure in the southern part of Tanzania as part of the implementation of the Backbone Investment and Transmission Project (BTIP) financed by the World Bank.

The collaboration between development partners and the World Bank has been at the center of the WBG program in Tanzania over the past decade. More than 40 development partners provide support to Tanzania, with four accounting for approximately 43% of total official development assistance (ODA). Of the $14.4 billion of ODA disbursed to Tanzania between 2005 and 2010, IDA is the largest financier, providing an average of 20%, followed by the United Kingdom providing 10%, the United States 9%, Japan 8%, and the European Union 7%. The World Bank Group (WBG) is an active player in the multi-donor General Budget Support (GBS) framework, which provides resources to support the poverty reduction strategy of the Tanzania government through the national budget. A donor’s joint monitoring mechanism known as the Performance Assessment Framework serves as an important tool to facilitate implementation of the GBS framework.

While the World Bank is in the process of preparing a new Country Partnership Framework for Tanzania, the country program is currently focused around two strategic clusters:

The 2014 Country Economic Memorandum offers a comprehensive diagnostic on creating productive jobs, but also proposed an action plan that will frame the Bank’s future lending and technical assistance programs. 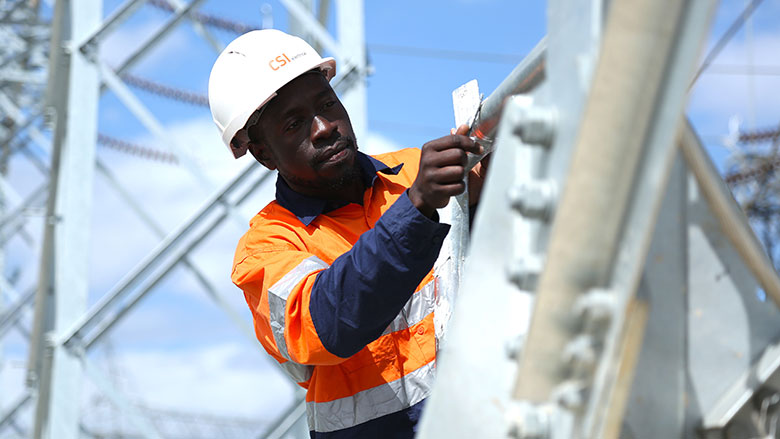 Completion of the installation of new infrastructure in the southern part of Tanzania as part of the implementation of the Backbone Investment and Transmission Project (BTIP) financed by the World Bank.

I am responsible for ensuring that all equipment at this mine is functioning properly to support our Tanzanite mining business. Our main challenge was low voltage electricity supply. As a result, most of our equipment would never work at full capacity. At some point, we had to revert to generators. But running a generator for mining was very costly compared to using grid electricity. We would limit ourselves to just six hours on generator power and during that time we would use between 350 liters and 500 liters of diesel. We would not run all our machines at the same time as we had to take care to reduce the load for our rather light generators. We were limited in our production.

But as soon as the Machimbo substation started operations; there has been a lot of improvement in the supply of electricity. We get a voltage of up to 420 and this is sufficient to run for our equipment. The mortars powering our machines are not crashing as they did frequently in the past. Supply is regular – if there’s going to be anything requiring that they turn off power supply, they notify us and we plan accordingly. And it doesn’t stay off for long. Today, we are able to blast all our machines and operations are mostly at full peak. The resources saved from resorting to generators have been used to improve other areas of operation, for example, hiring more people and increasing the number of work shifts.