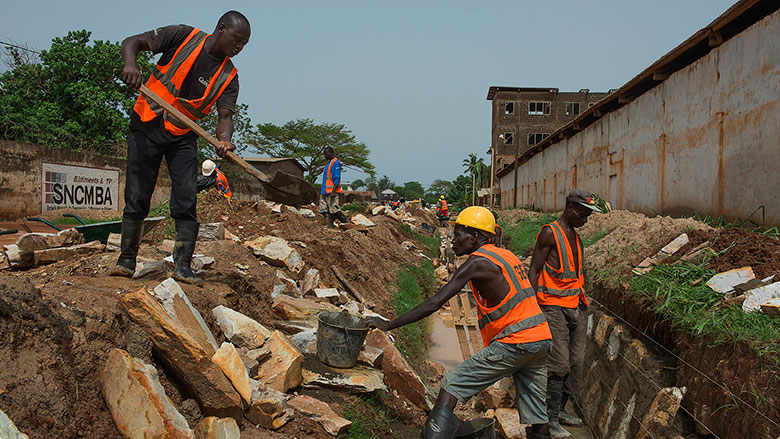 © Stephan Gladieu/World Bank
During the three-year transition that followed the 2013 coup, the World Bank helped prevent the state from collapsing by ensuring the payment of civil servant salaries. Cash-for-work programs promoted social cohesion, while emergency projects mitigated the detrimental impact that the crisis had on the country’s health sector and food security. Currently, a new generation of post-crisis recovery projects is building upon these emergency interventions as the Central African Republic (CAR) emerges from the most violent crisis in its history.

As a landlocked country bordered by unstable neighbors, CAR is one of the poorest and most fragile countries in the world. The recent conflict shattered the country’s already frail economy, tore its social fabric, and created a devastating humanitarian, human rights, and security crisis. At the peak of the crisis in January 2014, approximately 25% of CAR's population had been displaced with close to 1 million internally and over 200,000 in neighboring countries. That same year, the gross national income (GNI) per capita had plummeted to $600 and the purchasing power parity (PPP) returned to the dismal levels of the 1990s. Infrastructure was destroyed throughout the country, including schools and healthcare centers, and the payment of civil service wages was suspended for the better part of 2013, severely disrupting service provision. The highly aid-dependent government was unable to provide the most basic services and ensure its citizen’s security, further eroding the already weak social contract between the population and the state. The country’s bountiful natural resources, including abundant forests, gold, and diamonds, are mainly under the control of armed groups, which reign over a majority of the territory, thus fueling insecurity and instability. CAR faces the tremendous challenge of having to stabilize the country, while investing in early recovery and lasting peacebuilding efforts aimed at breaking the fragility trap.

A Country Engagement Note (CEN) was presented to the World Bank Board of Executive Directors in July 2015. The CEN describes the continuation of the crisis response and potential next steps for recovery and development over an 18-month period (July 2015 to the end of 2016). The strategy comprises two phases: (i) supporting stabilization in order to assist international efforts to break the cycle of violence and maintain confidence in the fragile transition; and (ii) preliminary support to recovery and development. The main focus has been on the first phase of the strategy thus far, and in particular the restoration of basic government functions, as well as support to livelihoods and basic social service provision. The engagement is principally focused on addressing some of the primary conflict drivers, and building confidence in public sector institutions. This will in turn assure external support to a fiscally weak government.

" With the money I earned, I was able to buy some women’s shoes, which I will sell on the street. I can use my new bike to carry my merchandise. "

As of September 2016, the IDA lending portfolio in CAR consists of seven national projects and one regional project, with a total commitment of $265.8 million in various sectors. This includes a $100 million package in emergency operations, aimed at supporting the crisis response. This support was provided through the restructuring of the existing portfolio and the frontloading of IDA17 lending, and was presented in an update to the Board of Executive Directors on January 21, 2014. The package in emergency operations included: (i) assistance to pay salaries and support public financial management reforms that seek to control expenditure and increase collected revenue ($40 million); (ii) cash-for-work programs, providing temporary jobs and promoting social cohesion in and around Bangui during the crisis, as well as in 71 prefectures nationwide ($30 million); (iii) support to emergency health needs through the provision of free medication implemented by the World Health Organization (WHO) and INGO ($10 million); and (iv) a food crisis response project, supporting half a million people through food and seed distribution, implemented by the Food and Agriculture Organization (FAO) and the World Food Programme (WFP) ($20 million). In addition, the World Bank is supporting an $8 million Emergency Power Response Project. 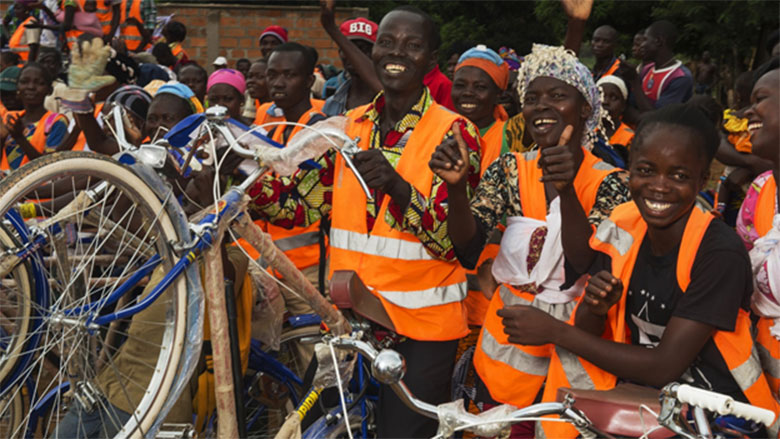 In Bouar, a town in northwest Central African Republic that was severely impacted by the conflict, beneficiaries of the LONDO project received free bicycles. The project provides temporary employment to vulnerable people throughout the country.

The World Bank has participated in weekly meetings with partners throughout the crisis and post-transition phase. These meetings have been held under the leadership of the African Union, with the participation of representatives from the United States and France, the European Union (EU), the African Union (AU), the Economic Community of Central African States (ECCAS) mediator, and the ECCAS representative. They fostered a collaborative environment, and helped ensure a sustained joint approach in supporting CAR’s recovery and stabilization process. This has been demonstrated through the undertaking of a Fragility Assessment, led by the World Bank in collaboration with the United Nations (UN), the Department for International Development (DFID), and the Agence Française de Développement (AFD), in consultation with CAR authorities. The Food Crisis Response project was implemented by the Food and Agriculture Organization (FAO) and the World Food Programme (WFP), while the emergency health needs were addressed by the World Health Organization (WHO). Preparation of new project is closely aligned with other development partners, and in particular the International Monetary Fund (IMF), AFD and the EU on the budget support operation, and the UN on the reintegration component of the disarmament, demobilization, and reintegration (DDR) program and the security and defense sector public expenditure review. The World Bank is currently discussing the possibility of establishing a multi-donor trust fund to manage DDR funds, which may include a contribution from the United States and ECCAS.

A Systematic Country Diagnostic (SCD) is currently under preparation and will be delivered during FY17, to allow for the preparation and delivery of the Country Partnership Framework (CPF) mid FY18. In addition, the World Bank has co-led, alongside the UN and the EU, a Recovery and Peacebuilding Assessment (RPBA), which informed the international donor conference for CAR that took place on November 17, 2016 in Brussels, Belgium. The RPBA defined the country’s priorities over the short and medium term, in a consultative manner and in close collaboration with all international and regional partners. It was adopted as the country’s National Recovery and Peacebuilding Plan. The RPBA also helped to inform the Bank strategy and Turn Around program, based on the country’s urgent and priority needs to support the recovery and peace-building process for the next five years.

The World Bank, through its LONDO (“Stand Up”) project, facilitated peacebuilding and stabilization efforts by giving short-term employment to 8,500 men and women in 17 districts outside Bangui at a time when insecurity continued to reign. One of the objectives of the project, which provided jobs to citizens through a transparent public lottery system, was to promote social cohesion. The project also promoted entrepreneurship among beneficiaries who each received a brand new bike and were encouraged to save part of their salaries in order to start a business once their work shift was over.

Romanic, a 19-year-old man from Bimbo, a city 15 miles away from Bangui, lost many relatives in the civil war that torn his country apart. “I lost my small shoe business so this project was a real life-saver. With the money I earned, I was able to buy some women’s shoes, which I will sell on the street. I can use my new bike to carry my merchandise,” he said.

“In a situation as difficult as this one, when you get help, it’s hard to measure the level of relief you feel. The project brought so much in terms of quality of life and jobs to a population that had been left to their own devices during the crisis,” said Jeannette Teya, Mayor of Bimbo. 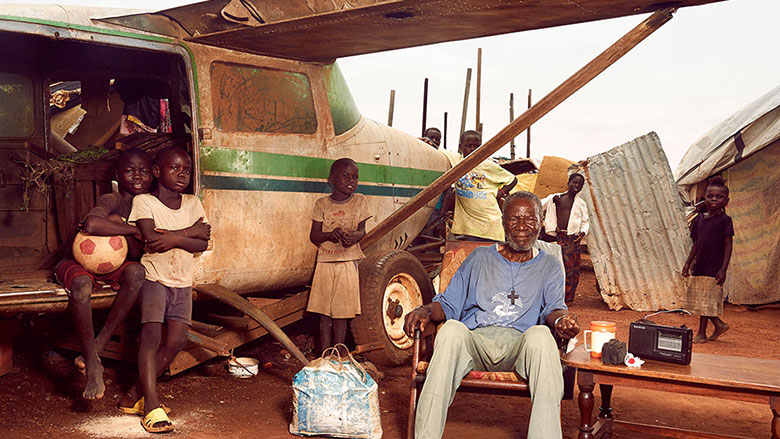