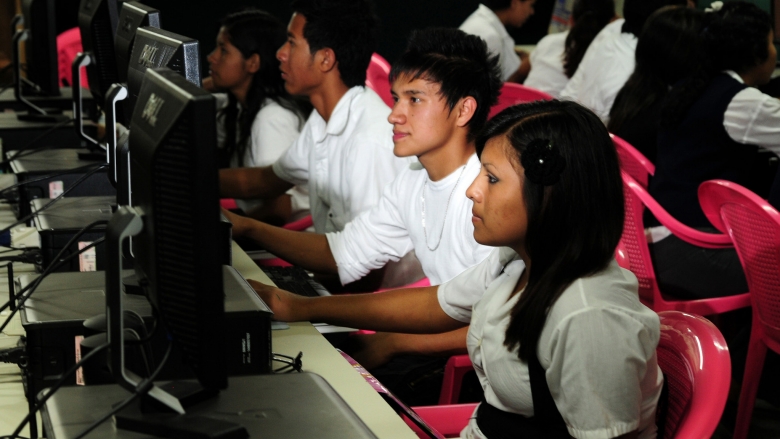 Drawing upon support from the Bank supported Education Quality and Secondary Education Project (EQSEP), Guatemala was able to significantly expand coverage at the lower secondary education (LSE) level, through the use of flexible modalities. One of these modalities, Telesecondary Institutions (TIs), helped increase access for approximately 70,000 new low-income adolescents to a secondary school education for the first time.

EQSEP approached the development challenge mentioned above through two key approaches: (i) a targeting mechanism to boost coverage in municipalities with the highest levels of disadvantage; and (ii) financial support for specific LSE modalities (called “flexible”) that could be the most realistic to enhance access.

The choice of flexible modalities was an innovative strategy to maximize access to LSE in a cost-effective way (i.e. without having to invest massive amounts of money into infrastructure or hiring 7th-through-9th-grade teachers). TIs were LSE modalities that used audiovisual pedagogical material to cover 7th-9th grade subjects and one facilitator (teacher) per grade.

Funding from the Project financed a combination of interventions (payment of facilitators’ salaries; new equipment and furniture; and pedagogical material) to support TIs. In the midst of a serious fiscal crisis faced by the country, the Project flexibly adapted to support the temporary payment of facilitators’ salaries, which helped keep the momentum.

The Project’s most significant achievement in terms of LSE coverage, from Project approval in 2007 to Project closure in 2015, was two-fold:

The results chain behind this significant result (outcome) was the following:

·  Information and Communications Technology (ICT) equipment combos – computers, printers, projectors, hard disks, and USBs - distributed to all 1,673 TIs from 2009 through 2012.

·  Pedagogical material for teachers and students, including intercultural bilingual material and books from the National Reading Program, distributed to all 1,673 TIs from 2009 through 2014.

·  Thoroughly revised TI pedagogical material for grades 7, 8, and 9 fully aligned to the National Basic Curriculum (NBC) for Guatemala (pre-existing material had been imported from Mexico and was neither aligned to the NBC or contextualized to the Guatemalan reality)

The World Bank provided a loan of US$80 million toward the total project cost of US$100 million. These funds were used to help pay for teacher salaries, training workshops, school equipment, and learning materials.

The EQSEP did not have any specific external Project partner. However, some donors also supported efforts spearheaded by the EQSEP. For example, the German Cooperation, through GIZ - its analytical arm – financed a few studies documenting how improved access-related outcomes at the LSE level were improving access-related indicators at the upper secondary education level. The main national Project partner was the Ministry of Education, where the Project Implementation Unit was located throughout the lifetime of the Project.

The EQSEP helped support a significant access-related intervention for expanding LSE in Guatemala. TIs are now viewed as a good first step to expand LSE access in low-income settings. However, this particular intervention seems to be limited by size. In fact, in 2016, 40 TIs have been converted to regular LSE schools (known as Institutos Nacionales de Educación Básica or INEBs) due to the significant enrollment numbers they reached over time. In other words, the sustainability of the TI model can be guaranteed up to a certain threshold after which a more significant financial effort (e.g. hiring a larger number of teachers) become a must.