Increasing Production and Improving Market Access for 7,900 Families in Ecuador 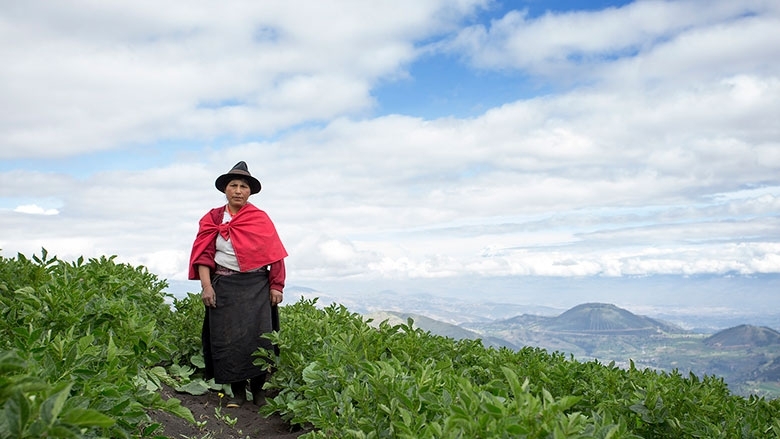 In 2010, over 50 percent of all irrigated land units in the Chambo and Chimborazo provinces of Ecuador were dedicated primarily to traditional food crops and livestock. Yields and cropping intensity were low, as was water use efficiency, mainly due to outdated technology and deteriorating infrastructure. Conflicts over water were common and sapped farmers’ willingness to innovate.

In the case of rural roads, deterioration due to erratic maintenance, difficult highland climate and other conditions contributed directly to the marginalization of rural families in remote areas and negatively impacted tourism, school attendance, access to basic services, and the transportation costs for farmers and suppliers of goods and services. The roads inventory was outdated, planning was driven by demand or political and social criteria, the capacity to plan, contract and execute road works was weak and, rates of rehabilitation and maintenance were extremely low.

The main innovative approach of the Chimborazo Development Investment Project (PIDD) was to combine investments and training aimed at: (i) improving the quality of irrigation services in order to improve agricultural performances, increase production and add value; and (ii) creating better conditions for market access through rehabilitation of rural roads.

The approach to irrigation development included a detailed project cycle including a strong emphasis on:

(i)  consultation and participation of beneficiaries;

(ii)  combination of investments, technical assistance and training; and

(iii)  a crucial contribution of the financial beneficiaries to the project costs to ensure empowerment and sustainability. This methodology is now widely acknowledged to have been beneficial and has been adopted by the Government in Chimborazo Province for all interventions in irrigation and other sectors where relevant.

Rehabilitation of 55 collective irrigation schemes with the following results achieved:

·  An increase of 64 percent in the annual agricultural production value (from November 2010 when the baseline was prepared to June 2014, the project’s closing date) benefiting 7,900 families, including 76 percent of indigenous people and 1,687 female-headed households as direct beneficiaries.

·  An increase in the cumulative value of agricultural production from US$ 5.3 million pre-PIDD to US$ 8.7 million post-PIDD. At the farm level, the average value of production among 7,867 PIDD beneficiaries was US$ 1,177 by closing – up from US $880 at Baseline. (versus a value for the Control Group of US$ 863).

·  The area devoted to higher value crops increased their annual agricultural production value by 33.2 percent (from November 2010 to June 2014).

Rehabilitation of 50 km of rural road and the creation of 16 Road Conservation Associations achieved the following results:

·  A reduction of 38 percent in average travel time on rehabilitated roads between June 2012 and closing date (June 2014) for an estimated 27,500 families.

·  A 55 percent decrease in vehicle Operation & Maintenance costs on the 50.4 km of improved roads (from June 2012 to June 2014), a significant factor for small farmers trying to limit marketing and transportation costs.  Beneficiaries surveyed stressed that improved access via road upgrades went beyond markets to include schools, health services, access to work opportunities and tourism.

The PIDD was the first IBRD loan to a sub-national government in Ecuador (amount of US$ 15 million).

A US$ 4.0 million Global Environment Facility (GEF) partially-blended operation in Chimborazo Province – Management of Natural Resources of Chimborazo” (PROMAREN) - was prepared jointly with the PIDD.

Following a restructuring in June 2012, the Decentralized Autonomous Government of Province of Chimborazo DAGPCH and the Bank discussed the outline of a possible Additional Financing (AF) intended to cover the higher costs of some irrigation subprojects already underway, expand several existing and completed irrigation systems, execute new subprojects which had missed the first “round”, and finance additional road works.  The AF design became the foundation for the IDB-financed operation, regarded as the second phase of the PIDD.

A project of national scope aimed at enhancing the incomes of small and medium sized farm households in the Central Sierra and Coastal Regions through a more productive and climate-smart use for land and water was approved by the Board in July 2015. The new Project incorporates lessons learned from the PIDD and supports demand-based provincial investment subprojects to strengthen small and medium-sized family farms. Importantly, the new project plans to work with PIDD beneficiaries to further support and consolidate their transition to modern farming.

“Irrigation is life. We live and eat from our lands; if there is no water, there is nothing,” said Hilda Rosalía Allaica Guamán, President of the Daldal Irrigation Board of Pungalá Parish, Chimborazo Province.

“Since the water arrived, the animals have improved; food has improved, and even education, because women in the countryside almost never went to school. Thanks to this system, we women received training on making our own decisions and on becoming part of the decision-making process,” said Ines Chapi, member of the Licto Parish water board.