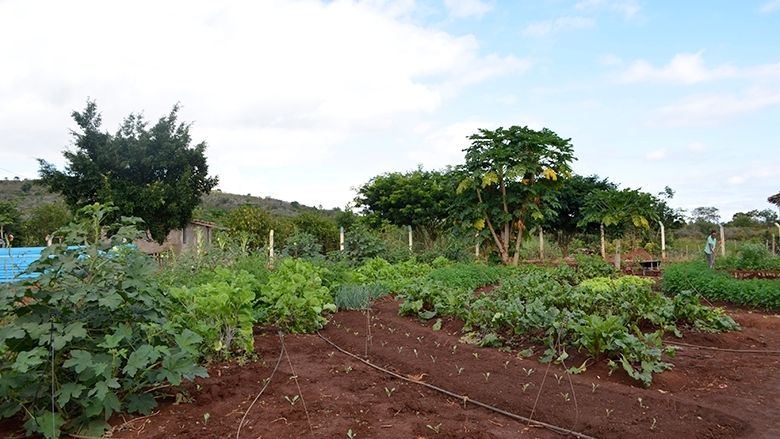 World Bank
Since 2006, water supply and sanitation investments supported by the World Bank have improved the health and well-being of 100,000 poor rural families in the Brazilian state of Bahia. These projects have reduced waterborne disease and strengthened their families’ drought resilience. Approximately 6,000 families have seen their income from productive investments increase. Women lead 31 percent of all associations financed. A total of 15,600 families from indigenous and quilombola ethnic groups received water supply, productive support, and training related to animal husbandry, mechanization, agroprocessing, and natural resource management.

The project, known locally as Produzir, was financed by the fourth in a series of World Bank loans dating back to 1993. These loans supported community demand-driven operations in Bahia, the largest state in the Brazilian Northeast region. By 2005, Produzir had become one of the state government’s main instruments for improving rural, social, and economic inclusion. Produzir reached the most vulnerable populations, including female-headed households, indigenous groups, and quilombolas (descendants of escaped slaves). It also became an instrument for building local participatory governance and spatial integration in rural areas. Even so, despite several decades of poverty-focused development efforts, in 2005 Bahia still had the highest number of poor households in the Northeast region, including 47 percent of its rural population. Bahia ranked 22nd on the United Nations Human Development Index (HDI) among all Brazilian states, indicating continued deficits in viable productive activity and in health and education services. A high proportion of rural households still lacked piped water, proper sanitation, and electricity, as well as the means of production to move beyond subsistence. Bahia remained a drought-prone state with challenging conditions for rural economic survival and prosperity.

A focus was placed on International Bank for Reconstruction and Development (IBRD) investments to align more closely to state development strategies and priorities to ensure synergy, avoid duplication, and increase the development effect on poor rural families. Produzir financing of US$54.35 million was to integrate with and complement strategic areas of the state’s Multi-Year Development Plan (2004–07), especially with respect to rural water supply, health, and environmentally sustainable generation of income. Project innovative instruments—both tested and scaled-up successfully under previous, similar projects in Bahia and other Northeast states—included the following:

1.      Financing matching grants to organized communities for investments in small-scale socioeconomic infrastructure that were explicitly aligned to improvements in the state’s HDI

3.      Training key state and local stakeholders to ensure that project investments complemented and aligned with other federal and state poverty reduction programs and, through aggressive promotion of partnerships with Produzir, leveraging additional, complementary financing for similar related activities

Additional IBRD financing of US$30.0 million, which was approved in 2009 in response to strong community demand for Produzir, applied the same methodology.

Bank financing with contributions from the state government and beneficiaries during the period of 2006–13 had the following outcomes:

The total project cost—including Bank loans totaling US$84.35 million—was U$216.1 million, 188 percent of the estimated aggregate cost. The cost of individual project components—particularly community investment subprojects—was underestimated at appraisal and was also subject to a strong national inflationary trend in the costs of construction materials, labor, and equipment over the project period. The state government’s contribution was much higher than expected—more than sixfold the original estimate. The contribution was increased by, among other things, Produzir’s intensive resource-leveraging effort, which involved many agencies and poverty programs.

The Regional Action and Development Company (CAR) within the state’s Secretariat for Development and Regional Integration established partnerships with many federal and state poverty programs and institutions. CAR leveraged financial and technical support from the Land Reform Agency, the Ministry of Agrarian Development (food security), the São Francisco Valley Development Company (water), the Ministry of Social Development (reservoirs and cisterns), and the National Indian Foundation. At the state level, partnerships with the Bahia Family Agriculture Forum, the State Quilombola Council, the State Indigenous Peoples Council, and the Vida Melhor Program supported the project. Two Japanese Social Development Fund grants—R$1.66 million to the National Confederation of Agricultural Workers and US$877,614 to CAR—were also provided by the Bank. The first financed the identification of challenges facing market access for poor rural producer organizations in the Northeast region and implemented 30 investments totaling R$1.7 million in agroprocessing, value addition, and animal husbandry. The second built institutional capacity in quilombola councils and executed small investments in basic infrastructure, production, literacy, and housing.

Produzir investments are generally sustainable. WSS beneficiaries are trained to manage their systems, and in the case of productive investments, operation and maintenance arrangements are in place with the associations paying into funds or making other acceptable arrangements. On the basis of the Produzir lessons learned, the Bahia Sustainable Rural Development Project (Bahia Produtiva) is being implemented with an IBRD loan of US$150.0 million. Bahia Produtiva shifted its focus from local needs-based productive subprojects to market-driven investments by organized producers and cooperatives (the productive alliances approach) because of opportunities identified in productive value chain analysis and territorial development strategies. In parallel, the poorest segment struggling with food security is benefiting from improving basic social and environmental conditions. These families also benefit from capacity building so that they can engage with markets in the future.

Statements by beneficiaries at the project closing workshops:

“No one has done as much for indigenous communities as this government. Indigenous peoples need projects like Produzir to improve their lives. We need more water cisterns. The challenge for country folk is water to produce and drink.”

“I am here to confirm the success of this sheepherding subproject, which has changed our lives. This is an activity which involves the whole family. I believe that in the future my children and relatives are going to be able to stay in our village. I am sure also that with Bahia Produtiva [the follow-on project], we can successfully advance.”

“Support from Produzir was fundamental for our association to develop beekeeping/honey processing by the local community. These investments by CAR are very welcome in associations which have them and have developed this work. Recently, we were also considered by CAR as a pathway, through the state’s Vida Melhor Program, which will help us a lot with transport and to create dynamism in our beekeeping activity.”

“We are very blessed through CAR and the World Bank because we work with handicrafts and were marketing our wares from huts which every day we had to stock up and then take down. Through the CAR project, the association received 48 “booths,” and in 2012, the subproject was expanded with another 28 booths. Today we have over 70 booths, and this advance is a reference point for our municipality, because it benefited 70 people directly and another 200 indirectly.”

— Maria de Lourdes Silva, President of the Association of Handcrafters of Caldas do Jorro, Municipality of Tucano, Bahia.