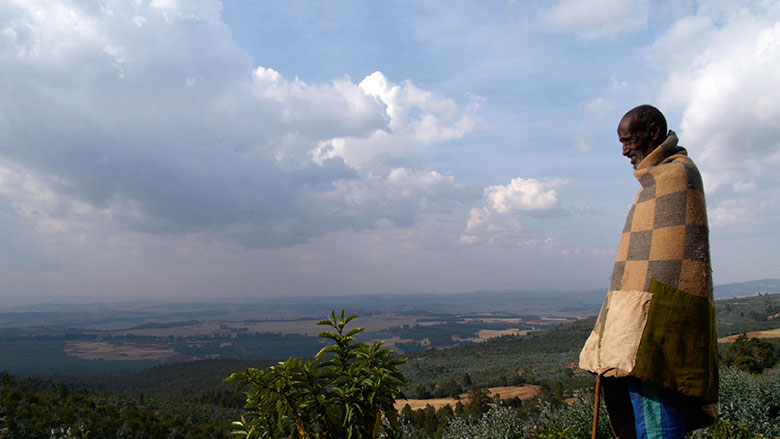 The Sustainable Land Management Project II (SLMP-2) is the Bank’s flagship resilient landscapes operation. Since 2008, 260,000 hectares of production lands are now better managed, benefiting more than 700,000 people (36% female). Major crop yields increased an average 10% while protective vegetation cover in the project watersheds increased 9%. SLMP has boosted household income 161%. Over 100,000 households were issued with land holding certificates, which legally entitles them to use the land. This has greatly enhanced their sense of ownership. Streams have returned and water tables have risen.

The natural resource base remains the foundation for the vast majority of Ethiopians’ livelihoods as well as sectoral goals such as water provision, irrigation, power generation and household energy, as well as food production. Investment in land resources is vital to build resilience, drive equitable economic growth and protect gains made from that growth among households and communities.

These activities have enhanced communities’ resilience to climate risks,   and provided them with diverse livelihood opportunities. SLMP-2 finances the innovative community-driven pasture closures which has led to greater livestock productivity, water availability, and the ancillary benefit of children attending school instead of tending their herds. The project is also providing landless youth groups with degraded land to rehabilitate and use.

" Our community now considers SLMP as the savior of our land; it conserves soil as the flesh, trees as the bones, and water as the blood "

Integrated watershed and landscape management activities were the major activities of the project directly resulted in the restoration of landscapes, enhancement of land productivity, and improvement of livelihoods and the overall biophysical environment. The project interventions generated several key outcomes including:

SLMP has been scaled up through a partnership with the $1.1 billion regional World Bank/ Global Environment Facility (GEF) Sahel and West Africa Program (SAWAP) for the Great Green Wall Initiative. The $50m IDA investment in SLMP-2 is complemented by a grant of $40 million from Norway and $13 million from the GEF and its Least-Developed Country Fund (LCDF). SLMP-2 has four components: Integrated Watershed and Landscape Management ($69 million); Institutional Strengthening, Capacity Development and Knowledge Generation and Management ($17 million);  Rural Land Administration, Certification and Land Use ($12 million); and Project Management ($5 million).

The WBG played the central role in convening partners for joint action. Ethiopia's SLM Program has been under implementation since 2008, strongly supported by the WB-supported SLMP-2 and several development partners such as Norway, Canada, Germany and International Fund for Agricultural Development (IFAD).  The Ministry of Agriculture and Natural Resources (MoANR), the World Bank and other development partners have been working together to achieve the main objectives of Ethiopia’s Strategic Investment Framework for Sustainable Land Management (2009-2023), ensuring harmonization, coordination, and alignment of investment, institutions and information.

SLMP-2 is establishing replicable and scalable models for integrated natural resource management packages to address complex development challenges such as the inter-related problems of land degradation, drought and other climate risks, productivity constraints, land use, water security, and land tenure. Due to the remarkable achievements made under SLMP-1 and positive results of the on-going SLMP-2, the MoANR continued its strong partnership and collaboration with the Bank in scaling-up sustainable and climate smart land and water management practices through its national  SLMP using innovative, integrated and inclusive landscape restoration and management approaches.

The various nicknames given by communities to SLMP are testimonies to its success. Those in Hotte (Oromia region), call it fayyissa (healer).  According to Beniam Kehilu, a farmer in the Kola Embhasti (Tigray region), “SLMP cured the environment, human life, and livestock.” “In Tind Wat (Amhara region), SLMP is yemeret abbat (father of the land). Tamire Tadesse elaborates: “SLMP is more than a father. A father cannot feed his children when there is no food. Our community now considers SLMP as the savior of our land; it conserves soil as the flesh, trees as the bones, and water as the blood.”