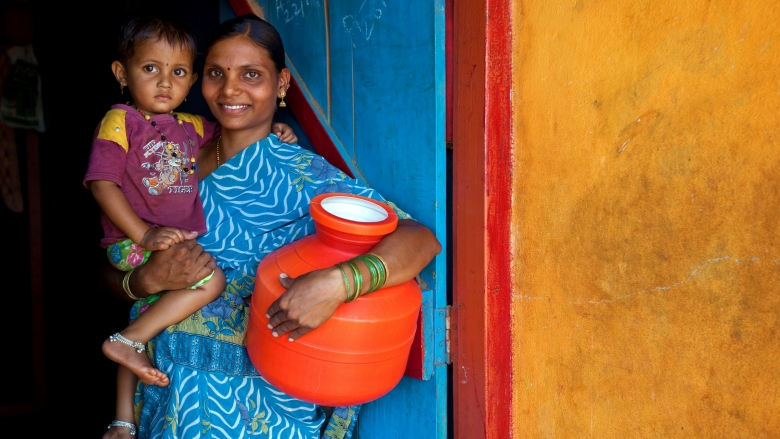 Geetha Bhogan no longer rides a bullock cart to fetch water from 2 kms away. Eight month pregnant Geetha now gets water through a tap at home in Bekkinkere village, in Karnataka’s Belgaum district.

Photo Credit: Graham Crouch, World Bank
From the early 1990s, ten IDA projects have helped India to move away from the traditional top down approach in providing rural water supply services and begun to empower rural communities to construct and operate their own water supply systems. Projects spanning ten states have built on lessons learnt from earlier ones to improve water supply for about 26 million rural people.

India has long faced the challenge of providing safe drinking water to over 700 million people in more than 1.5 million villages. In 1972, the government began to improve rural water supply, and in the mid-1980s the issue was declared a national priority. As a result, by 2011, 95 percent of India’s rural population had access to some form of water supply infrastructure. In practice however many systems were no longer functional. The key issue was that systems were designed and constructed by state engineering agencies with little participation from local communities.  People lacked a sense of ownership, and maintenance was neglected. Consumers also treated water as a right to be provided free-of-cost by the government, making systems financially unsustainable. Moreover, a growing population led to the mounting demand for water, with the result that water tables were falling and many water sources were shrinking or drying up altogether. At the same time, rural households had begun to demand higher levels of service. While in the 1990s, rural communities were satisfied with village wells and hand pumps, many now sought piped household connections.

" 'We used to have to fetch water from the borewell 2km away from our home. The daily grind made the men late for work, and we fell sick more often,' Geeta recalls. Today, Geeta, near full term in her second pregnancy, is both relieved and happy. Thanks to the IDA supported Jal Nirmal Project, the family now has a water connection at home. 'We now get water for two hours each day.' " 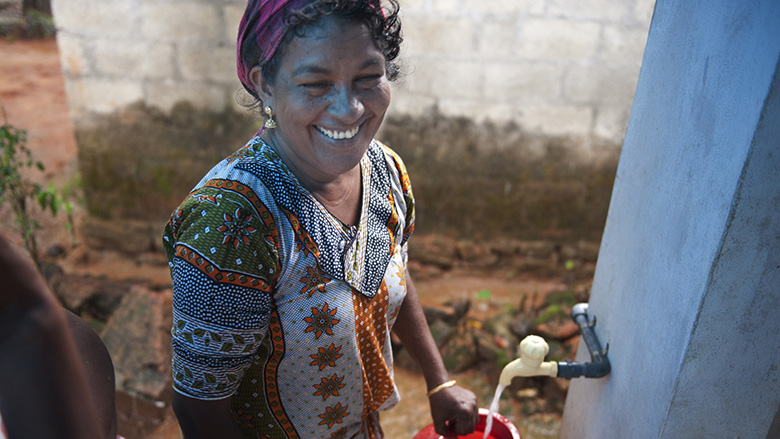 The Jalanidhi project has gone a long way in ensuring that rural families in many water-stressed parts of north Kerala receive a dependable supply of piped water in their homes, at a price that even poor households can afford.

In response to the government’s efforts to test various reform options, four generations of Bank projects have pioneered new models of service delivery. Projects spanning ten states have built on lessons learnt from earlier ones, with the experience gained helping shape the government’s national strategy for the sector.

First generation projects: Between 1991 and 1996, IDA projects sought to shift the responsibility of rural water supply schemes from government institutions to local communities. Communities could now choose the systems they wanted and were willing to pay for. They then planned, procured, constructed, and managed their own water supply systems.  For the first time, NGOs and private sector consultants were used to support rural communities. These projects were the forerunners of reform in the sector.

Second generation projects: In the 2000s, projects sought to ensure the long-term sustainability of systems by strengthening local ownership. Communities and local governments were to pay a part of the capital costs in cash or kind, and meet O&M expenses in full. Government agencies were to become facilitators and focus on policy formulation, and monitoring & evaluation. Since this was the first time that village governments were managing large and complex activities, the challenge was to build their capacity on all fronts. Government agencies too were new at playing the role of facilitator.

Third generation projects: From 2005 onwards, projects took a programmatic approach where a common framework was adopted for planning, implementation, and monitoring and evaluation across the State, irrespective of the source of funding or the implementing agency. Important linkages were introduced between village water and sanitation committees, local governments, and state technical agencies to provide long-term technical, financial and political support for community efforts.

Fourth generation projects: More recently, projects have adopted a results based approach that emphasizes outcomes by linking financing to the achievement of key indicators, and strengthens state governments’ capacity in implementation. The decentralization model is now being scaled up in four low-income states – Assam, Bihar, Jharkhand and Uttar Pradesh - through a national level project.

" 'Collecting water used to be a huge problem,' recalled Ambika Vijaykumar, 58, mother of two in Palakkad district. '27 families depended on just one public tap for water. And in summer, this was available only at night.' Ambika’s constant travails in collecting water spurred her on to play a pivotal role in mobilizing 62 households to build their own water supply system, raising money, buying land for an open well and a pump house, and building an overhead tank to store water in.  "

World Bank-supported projects have shown that communities are indeed capable of managing their water supply services, if some facilitation is done by local governments. They have demonstrated that community management of water supply systems reduces the capital costs for infrastructure, and that even poor rural residents are willing to pay for assured and safe water supply.

In Uttarakhand, by December 2015, over 8,000 habitations had built their own water supply systems, benefitting some 1.5 million rural residents. Strong community involvement reduced the cost of systems, curbed the leakage of funds, and led to huge savings for the state exchequer. Given the mainly hilly terrain, rural homes received 24/7 water supply through gravity-based piped systems that used no electricity whatsoever.  The Project has decentralized the responsibilities of service delivery across Uttarakhand, and has twice received a prestigious award for improving transparency, governance and accountability.

In Kerala, where rapid urbanization is placing an increasing strain on water sources, two projects have brought regular water supply to villages once plagued with water shortages. Jalanidhi 1 (2000-2008) provided a dependable supply of piped water to 192,000 rural homes in 13 districts, at a price that even low-income families could afford. Water meters were installed in many areas to curb consumption. Ten percent of capital costs were met by village governments, while the beneficiaries contributed 15 percent and paid regular O&M expenses. Jalanidhi 2 is now working with village governments to project future water needs, build storage capacity, and devise back-up plans for contingencies.

In Maharashtra, where the mostly barren and rocky terrain makes it difficult to identify water sources and ensure their sustainability, two projects decentralized water supply services to local communities even in remote hillside villages and on drought-prone plains. Between 2003 and 2009, Jalswarajya 1 brought clean drinking water into 1.2 million homes, more than half of whom were below the poverty line.  Introducing the culture of paying for services has created the basis for future sustainability. Jalswarajya 2 (2014-2020) is demonstrating new models, pioneering the adoption of the PforR instrument in the country. It is also helping the state to address systemic challenges across the sector, including the challenges of providing services to peri-urban areas, improving water quality, and bringing services to water-scarce areas.

The dry rain-fed region of Northern Karnataka is home to some 15.5 million people, or about 40 percent of the state's rural population. Most people are poor and socially disadvantaged and have long faced severe difficulties in accessing drinking water.  By decentralizing services to rural communities, the Karnataka Jal Nirmal project (2002-2013) improved water supply for about 7 million rural inhabitants in 11 districts of Northern Karnataka.

Even though a number of rivers flow through Punjab’s green and fertile farmlands, many villages faced acute shortages of drinking water. In 2006, when this third generation of project first started, most villages received only intermittent water supply, and almost a fifth had no water supply system at all.  The $154 million (2006-2014) project’s sector-wide approach has extended access to safe water supply to 5.4 million people, or 31 percent of the state’s rural population.

" The quality of water in our village was extremely poor and we suffered from stomach-related ailments. But now that we get water at home three times a day, ailments like diarrhea have reduced dramatically. Women no longer have to spend hours collecting water. The water also tastes much better.  "

Analytical and advisory services: In addition to lending, the World Bank has conducted a number of analytical and advisory activities that have contributed to the dialogue on sector reform. In 2006 and 2008, two major studies were conducted to understand how water supply systems in rural India have evolved over the years, and to ascertain the inefficiencies and barriers that still remained in the improvement of services.

In Maharashtra the PforR Program established a collaboration between the Massachusetts Institute of Technology and the state’s Water Supply and Sanitation Department to help the latter in developing a strategic framework for planning across the state.

The Uttarakhand project developed various partnerships, especially with the four Low Income States Project to share good practices and service delivery models for decentralizing responsibilities.  The M&E system developed under the project has been launched nationally, including in the four low income states.

Despite progress, providing safe drinking water to millions of India’s rural people remains a challenge. The task is not simple. Each generation of IDA projects has faced new challenges as they sought to make up the backlog in services while meeting rising expectations.

While the first and second generation projects supplied one to four hours of piped water a day, the third and fourth generation of projects have moved towards more flexible timings, and pioneered a shift towards 24/7 water supply.

The rapid rise in the extraction of groundwater has led to major concerns about the depletion of water resources. With a number of regions facing acute water crises, especially during the summer months, projects in Maharashtra and Kerala are now mapping water resources, defining ways to replenish aquifers, and working to ensure the more sustainable use of ground water.

Water quality has also become a major issue. Over the past ten years, the number of communities affected by water quality problems has risen, and solutions are proving to be increasingly complex. Harmful substances such as arsenic, fluoride and even uranium are found in the groundwater in some areas, greatly exceeding World Health Organization (WHO) standards. Experience gained from World Bank projects is expected to further refine the management of water resources, as well as to temper demand.

Going forward, communities’ abilities to plan, construct and implement water supply schemes will need to be improved, as well as their ability to manage ground water in a sustainable manner. This will call for building greater technical capacity among village committees, as well as stronger oversight and support from local governance institutions, together with more reliable electricity supply to help systems function. In areas where the availability of potable water is low and water has to be drawn from surface sources further away, multi-village systems which present a high degree of technical complexity, will need to be built.

26 million
have benefited from improved water supplies throughout India.