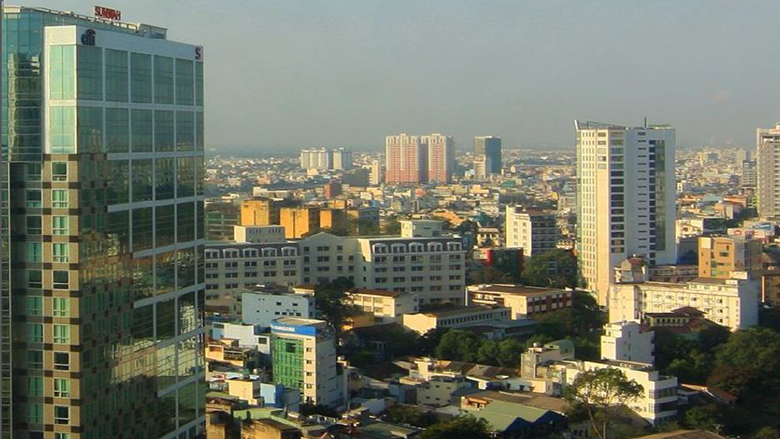 General view of Ho Chi Minh City, the largest city and the business hub in Vietnam.

Fiscal policy and management in the past 20 years have enabled prioritized government spending to deliver public services in Vietnam, particularly among the most disadvantaged.

However, new challenges have emerged including fiscal pressures from declining revenue (from 25 percent to 20 percent of GDP between 2009 and 2014), build up of contingent liabilities, larger investments requiring medium-term planning, more robust appraisal, and new sources of financing, increased demand for fiscal information that impacts on economic and credit ratings, increased decentralization of public service delivery (local spending is more than 50 percent of total), and greater demand for public sector performance and accountability.

These challenges have called for reforms to ensure that the State Budget can keep pace with Vietnam’s rapidly changing economy and service delivery needs. The attention of fiscal policy and management has turned much more towards quality and efficiency of spending, ensuring fiscal sustainability, and making more information available for transparency and accountability.

The Bank team prepared a series of targeted inputs to influence the debate on the amendment of the State Budget Law. These were delivered in innovative ways to maximize impact on a middle-income client that was receiving advice from numerous sources. The approach included:

1. Primary survey of stakeholders to get evidence on the demand for fiscal information from the private sector, development partners, civil society and the media to help inform prioritization of the fiscal transparency reforms.

5. Holding joint consultations anchored on the above Advisory Services and Analytics (ASA) with the central Ministry of Finance, Parliamentary Committee on Budget Affairs, and sub-national authorities to exchange views, present evidence, and build consensus for reforms.

The Bank’s trusted technical advice, combined with engagement across a wide range of stakeholders led to a large number of the recommendations from the PPFR engagement being adopted in the revised Law (2015), which was much more progressive compared to the original proposal. Highlights include:

• Strengthening strategic allocation and fiscal sustainability (through the adoption of the Medium-Term Fiscal and Expenditure Frameworks)
• Greater budget comprehensiveness and transparency (through the adoption of international standards in the definition of the budget balance, more standardized and unified budget classification to communicate budget policies more transparently, more comprehensive budget documentation which highlights the links between the budget and extra-budgetary funds and state-owned enterprises)
• Improving citizen’s engagement (through the first-ever disclosure of the budget proposal, preparation and disclosure of a “citizen’s budget”)
• Improving fiscal decentralization arrangements and discipline (through the new fiscal rules for local borrowing, more control over carry-over expenditures,)
• Stronger emphasis on performance-based budget management, requiring delegation of more authority over inputs to be acompanied by increased responsibility and accountability for results.
• Elevated legislature authority and oversight (both on the medium-term fiscal aggregates and inter-governmental fiscal relations and on the annual budget through the decompressed budget calendar and supplemental review of deviations from original budget).

• A baseline diagnosis of the strengths and weaknesses Vietnam’s public finance management systems and processes following an internationally-recognized framework, suggesting priorities for reforms.
• Empirical analysis on the performance of fiscal policies and institutions in promoting equitable growth while ensuring fiscal sustainability, timely informing budgetary policy responses for the next five years at both central and local levels.
• Strengthened analytical capacity and ownership of the Government for more periodical analytical work.

The ASA work was funded out of Bank Budget (around $250,000) and trust fund resources (around $750,000). A team of World Bank specialists led the ASA, working closely with the Ministry of Finance, Parliamentary Committee on Budget Affairs, Development Partners, sub-national authorities and academia.

A large number of recommendations from PPFR work have been institutionalized in the revised State Budget Law, and likely in the new government decree on on-lending. Guiding regulations are being prepared to put these into operation.

The empirical analyses have helped to inform government’s policies and raise their willingness to use evidence for decision-making in the future. These also help inform future TA, policy dialogue, and specific project financing and development policy financing operations of the Development Partners with both the executive and legislature bodies at both central and local levels.

The government appears to be ready to implement a number of recommendations of the Public Expenditure Review (PER) through fiscal consolidation measures, public finance policies, and institutional reforms.

The processes of close engagement and joint work with the counterparts have helped to better expose staff and leaders of the Government and the National Assembly to international expertise and experience and strengthen their capacity in policy making and implementation.

The ultimate beneficiaries of the amended State Budget Law are the Vietnamese citizens through improved service delivery and poverty reduction that should result from better quality budget management.