It’s barely the beginning of summer in the city of Saranda on Albania’s southern coast, but tour operator Ben Cipa is already busy at work. Just a few blocks away from where his travel agency sits is a new port, and tourists are already starting to trickle in.

“In Saranda we could say that the main industry is tourism, beach and cruise tourism, we have a port and the port gives an opportunity, it gives us tourism,” says Cipa.

The new port at Saranda is part of a World Bank project supporting sustainable coastal development and tourism infrastructure along Albania’s southern coastline.

" In Saranda we could say that the main industry is tourism. We have a port and the port gives an opportunity. " 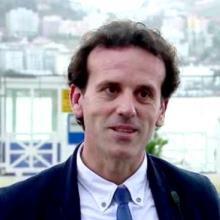 The new port at Saranda, with its natural and historical sites, is keeping local tour operators increasingly busy, bringing more business for the local economy.

Saranda is endowed with natural and historical sites which are potentially rich in local and international tourist dollars that can help the country’s struggling economy, according to Saranda’s former Mayor, Stefan Çipa, who reports a steady rise in tourism since the new port’s completion.

In addition to the port, an Integrated Coastal Zone Management project has upgraded Saranda’s water system, and plans are underway to establish a landfill to better deal with the area’s consequential increases in waste.

" The number of tourists increased by 20 percent this year, and that was due to the port. "

A steady increase of tourists each year creates more demand for tour guides.

Such improvements are welcomed by the city’s vendors, like Bashkim Beqaj, who says the recent changes are translating into bigger sales at his seaside restaurant.

“Definitely, we feel it because on the days that the cruises come, it is like a celebration. All businesses are full of tourists,” says Beqaj.

Tourists are also filling the coffers at Saranda’s famed antiquity sites, such as the ancient Greco-Roman city of Butrint, where the increasingly steady influx of visitors has created job opportunities for local residents, says Kela Qendro, who is part of a government effort to train more tourist guides.

“It is much easier to operate the excursions, and we have seen private yachts.  The new port has played a big role,” she says.