A rural producer in Paraguay

Ruth Gonzalez / World Bank
This task supported Government of Paraguay’s efforts to link small producers of two areas in Paraguay - San Pedro and Caaguazú – to market opportunities and to improve competitiveness in specific value chains. The task focused on the cassava starch value chain, for which a detailed pilot intervention was designed; additional analysis and recommendations were made for interventions in the Stevia sweetener and dairy sub-sectors. The Technical Assistance was requested by the Minister of Finance, on behalf of the Presidential Advisory Council for Economic Affairs (Grupo Económico Nacional), and was provided to an inter- ministerial committee, which included representatives from the Ministry of Finance, the Ministry of Commerce and Industry, and the Ministry of Agriculture and Livestock. The task relied on economic sub-sector prioritization, feasibility analyses, and diagnostics, prepared through a participatory approach, which linked key stakeholders, notably at the local-government and the private sector level, with the inter-ministerial committee.

Challenge
With rural poverty standing at 45 percent, and with over two thirds of the poor in Paraguay living in rural areas (2010 data), fostering economic inclusion of the rural poor into markets and developing value chains was central to Government’s objective to sustainably reduce extreme poverty.

Solution
This Technical Assistance contributed to addressing this challenge through the following activities:

To design the pilot project, and formulate strategies for Dairy, Stevia Sweetener, Pork, and Poultry, the task had financing of about USD 200,000.

The key partner was the Ministry of Finance, who provided logistics support and 4 staff to work in the task, for an estimated amount of USD 30,000. Local starch processing firms have agreed to align their own investments in field supervision, land preparation and planning with the execution of the pilot project.  The concept of the pilot project was conceived under a public private alliance scheme, making the National Association of Cassava Exporters  not only a partner but also a direct stakeholder. Member firms from the association have committed to leverage government expenditures with their own investments in supervision, land preparation and planning.  The World Bank attempted collaboration with JICA  and CAF.

The task had 2 beneficiary groups: policy makers and practitioners, who will make use of the blueprint to engage with the private sector and implement action plans with a sectoral focus. The pilot project in cassava starch will directly engage 3,000 small producers in its first year of implementation, who will become integrated producers in starch supply chains once scaled. Most of these producers belong to poor households residing in rural areas of Paraguay.

About 3,000
families targeted in its pilot stage. 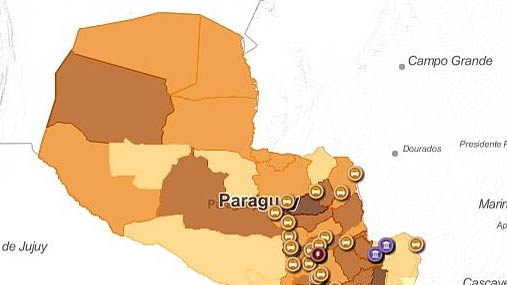