Securing Land Rights for the Poor

March 27, 2014
Drawing upon World Bank funding since 2002, Nicaragua has substantially revamped its legal and institutional framework for land administration. The country has embarked upon a regularization program covering more than 220,000 rural and urban properties, granting land titles to more than 60,000 poor households, demarcating 14 protected areas, and titling 15 indigenous territories that account for nearly 20 percent of the national territory.

Securing property rights and modernizing land administration was central to Nicaragua’s social and economic development. The country experienced years of contradictory legal and administrative decisions that contributed to land tenure insecurity and undermined the population’s confidence in state institutions. In 2002, poverty was overwhelmingly concentrated in rural areas and the country was emerging from a post-conflict situation. It was estimated then that over one third of rural land was held without a clear title.

The share of land with no or improper documents was critically high among poor, small-scale producers. Land conflicts due to overlapping claims were numerous. Long-term insecurity of tenure posed particular challenges to agricultural growth, natural resource preservation, and social fairness and cohesion. The land claims of indigenous peoples, some of the most disadvantaged and poorest rural groups, remained mostly unaddressed. There was also an urgent need to promote gender equity in land ownership because past agrarian reform programs and inheritance laws had favored males.

To address the above challenges, the Bank supported Nicaragua through the Land Administration Project - PRODEP, which implemented an approach focused on legal and policy changes, institutional consolidation, organizational capacity building, modernization of land records and information systems, and extensive piloting and implementation of regularization and demarcation initiatives. Three fundamentally important laws were passed and implemented: Titling of Indigenous Peoples’ Lands Law (2003); Cadastre Law (2005); and Public Registry Law (2009). This legislation provided clarity and fairness to processes of demarcation and titling of indigenous communities as well as to cadastral and registration activities.

The adequacy of the project’s implementation framework was then tested through an extensive pilot regularization program focusing especially on small rural producers and urban households in medium-sized towns, in specific departments where poverty levels were highest. The territories of historically marginalized indigenous communities in the Caribbean Region were demarcated and collectively titled to better protect their asset base in a changing economy, and vulnerable protected areas were also demarcated for the first time. These processes were supported by alternative conflict resolution that has contributed to social peace and cohesion.

" 15 indigenous territories, corresponding to over 20% of the national territory, were demarcated and titled in Nicaragua’s Caribbean Region, benefitting more than 100,000 indigenous people. "

The Bank’s support totaled US$42.60 million of which US$10 million was approved as an Additional Credit in February 2010 as the Government of Nicaragua sought to complete coverage in the pilot municipalities and expand to a new province. Titling and regularization accounted for 45% of total project costs while demarcation and titling activities in indigenous territories and protected areas amounted for another 10%. More than one third of project costs went to institutional strengthening and decentralization.

The Government of Nicaragua expanded its efforts with support from other development partners such as the Nordic Development Fund (NDF) and the US-Millennium Challenge Corporation (MCC). NDF provided a credit of EUR5.5 million to support institutional strengthening and urban cadastral and regularization activities outside the scope of PRODEP. In addition, MCC financed the successful piloting of a new methodology for cadastral surveying and regularization that would be later applied under the project and subsequent programs. Moreover, MCC transferred about US$2.6 million for equipment and funded the studies and assessments needed to prepare the Additional Financing.

The Government of Nicaragua now has a clear vision and is implementing a long-term land national program. As part of the program, a second phase (PRODEP II, US$40 million) was approved by the Bank in March 2013 with similar components to PRODEP while expanding its activities to other municipalities.

Various factors contribute to the sustainability of project outcomes:

The project benefited 44,019 people in rural areas of 5 provinces, where 51% of the beneficiaries were women. One example is Maria de los Angeles Reyes, who works with her family on a 3.5 acre property in El Limón (20 miles southeast of the city of Rivas in the Pacific lowlands region of Nicaragua) that benefited from the Land Administration Program (PRODEP). Maria considers that “the titling and implementation of the National Cadastre allow us to have a more secure property, because we will know exactly our property measurements, produce better, and women can have access to land.” As a direct outcome of securing land tenure, additional social benefits could be provided to Maria, including training in animal and plant care that will help improve her family's overall income.

Recognition of Indigenous Land Rights in Honduras, Nicaragua and Colombia

44,019 people
in rural areas had benefited from new titles 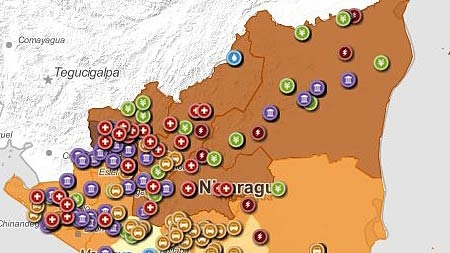