Marko Ristov is a 12-year-old student from the village of Sokolarci, which is about 100 kilometers from the capital, Skopje. Zoran Balevski is a private entrepreneur from Skopje with keen interest in renewable energy, which is an area of great interest and attention in the Former Yugoslav Republic (FYR) of Macedonia.

Though they don’t know each other, both of them are integral parts of an effort to use the country’s natural resources and, in so doing, improve the lives of its citizens.

Marko and his fellow students at the Strasho Pindzur elementary school in Sоkolarci remember their school as a dim, depressing place that quickly turned into a refrigerator with the arrival of winter. Students had to crowd into one room and   the only heat came from a single wooden stove strategically positioned at the center of that classroom.  Students breathed in wood smoke and had to wear bulky winter jackets indoors.

The Strasho Pindzur School wasn’t unique. Many decades-old school buildings offered little protection against weather conditions and harsh temperatures. The heating systems in the schools were very old or almost nonexistent. Heating often consisted of wooden stoves, like in Sokolarci, or outdated gas-fired boilers that produced little warmth but cost a lot of money.

At the same time, the country’s renewable resources were largely going untapped.  Investment was small, as many commercial banks were wary of investing in this field and put their loans into other businesses.

So, with support from the World Bank, the Government of FYR Macedonia is trying to both improve conditions in schools and boost private investment in renewable energy.  Although relatively small in scope, the World Bank-managed Global Environment Facility grant brought in US$5 million. It came just at the right time to bolster pilot initiatives aimed at proving the benefits of preserving energy and using what nature can provide.

In six towns across the country, work began on 18 schools and kindergartens. Workers replaced old windows with more efficient, heat-preserving ones. They added new insulation to roofs and walls. Old boilers and radiator systems were replaced. The first phase of the project quickly led to the second one, with an additional 23 schools and kindergartens also renovated and made more energy efficient. Schoolrooms became brighter and warmer. Wooden stoves and the harsh smell of burned logs and gas became a thing of the past.

These improvements also saved money. Officials say the energy efficiency measures in the first phase of the project could save around EUR14,000 per school, every year. That’s money that would otherwise have to come from municipal budgets. At the same time, the Government is working on a nation-wide program for energy efficiency that would include every public building throughout the country.

The project also provided seed money for the construction of the first big solar plant in the country. This money also encouraged the managers of the Society General Bank to help fund investment in renewables - ultimately financing the building of Mega Solar, which produces clean energy from of FYR Macedonia’s 200 sunny days each year. And that’s not all. The World Bank is creating a fund to finance more, and bigger, energy efficient projects in FYR Macedonia. It’s the first such fund in the Balkans. 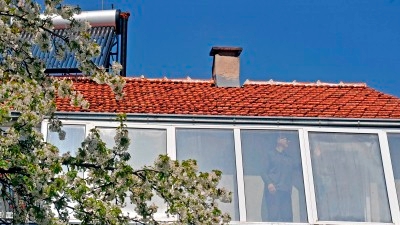 14,000
EUR on average per school will be saved every year thanks to energy efficiency improvements in them
Source »