April 3, 2013
World Bank Group
Public transportation in Colombia was traditionally perceived as inefficient, unsafe and polluting. Beginning in the mid-1990s, the Colombian government embarked on a program focused on the development of bus rapid transit (BRT) investments in the country’s largest cities.

For many years the streets of large Colombian cities were battle grounds. Due to lack of adequate regulations, public transportation routes were awarded to private sector companies which acted as intermediaries, handing over the routes to individual bus owners and operators. These transport entrepreneurs, acting almost as if they were franchises, would recruit drivers to collect profits at any cost. At the same time, drivers were faced with the harsh reality of urban transport in shifts of 14 hours or more without any working benefits.

These perverse incentives resulted in a fierce competition for passengers in the streets while collecting fares, dodging pedestrians, outmaneuvering competing drivers on the same route, and simply surviving a relentless urban transport war.

Beginning in 1996, the Government adopted the National Urban Transport Program (NUTP) centered on the development of BRT investments in Colombia’s largest cities. The investment strategy targeted high quality, bus-based rapid urban mobility at a fraction of the cost of rail systems, concession arrangements for service provision (bus operation and fare collection) and measures to strengthen the institutional and regulatory weakness that permeated the sector.

Over the years, this Bank-financed program has been complemented by a comprehensive knowledge and convening services program that seeks to build the knowledge base of the Government of Colombia and municipal governments to:

As of end of 2012, five of the six Bank-financed BRT systems are operating: Transmilenio-Bogotá, Megabus-Pereira, Transmetro-Barranquilla, Metroplus-Medellin, and Metrolinea-Bucaramanga.  The most famous is Bogotá’s Transmilenio, conceived in 1998, and which served as a model for the roll-out of the other BRT systems. Transmilenio currently has 87 km of segregated bus lanes in operation, 115 stations, and carries close to 1.7 million passengers per day–approximately 28 percent of the city’s public transport demand. Since its inception, delegations from more than 20 countries, including China, India, Vietnam, South Africa, Kenya, Finland and the United States have visited Colombia to learn about the program.

" Transmilenio gave me many good things. First of all, it takes me everywhere quickly, even though people complain that it’s too crowded. The trip is really fast. Second, there’s the comfort of having a guide tell me which bus to take. Third, the bus makes fixed stops as part of an itinerary; the other buses would see I was blind and assume I was going to get on to sing or beg. They also have elevators that help a lot. " 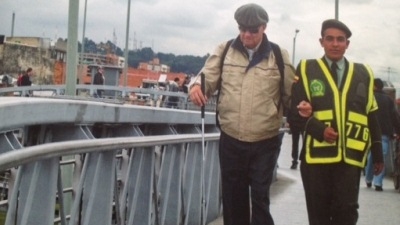 The Bank has established a long-term partnership with the government of Colombia to support this radical change in the urban transport sector. This engagement dates back to the mid-1990s. Since then, more than eight operations have contributed to the technical, operational and institutional reform of the transport sector. More recently four lending operations totaling US$1.1 billion support the NUTP in the construction and operations of BRT systems in six cities:  Bogotá, Barranquilla, Bucaramanga, Cartagena, Medellin and Pereira. The investment lending operations include:

Colombia’s urban transport program has also received financing from the Inter-American Development Bank (IADB) and the Andean Development Corporation (CAF). The IADB is currently financing the BRT in Cali, and the CAF has financed Bogotá’s Transmilenio Suba corridor and will help implement Cucuta’s system.

More than 20 trust funds have complemented the Bank’s knowledge services agenda. These multi-year engagements have sought to  build the knowledge base of the central government and of the governments of Bogotá and other cities to, among others, (i) strengthen capacity for analyzing urban mobility and options to improve planning, management, operations and financial sustainability of integrated public transport systems, (ii) strengthen capacity for planning and implementing travel demand management strategies and non-motorized modes, (iii) provide how-to guidance for the implementation of possibilities to better coordinate land-use with transport demand and promote transit-oriented development, (iv) assess and revisit tariff policy issues, particularly pertaining to affordability, accessibility, and how-to guidance for the implementation of targeted public transport subsidies, and (v) mainstream issues of road safety, gender and universal accessibility in public transport.

Challenges remain to consolidate the sustainable urban mobility policy that Colombia embarked on more than a decade ago. The most pressing concern is the need to move forward with the full integration of public transport systems, since amidst the new systems, traditional public transport buses still operate. As cities move towards this full integration of public transport services, issues of accessibility and affordability become crucial to guarantee that the most vulnerable population is served. Furthermore, in an era of unprecedented urbanization and motorization, demand management schemes become crucial policy considerations, so that auto users actually pay for the costs they impose on society. The Bank will continue to support this agenda by mobilizing its financial, knowledge, and convening services to work towards more livable, green and inclusive Colombian cities.

According to the latest data, riding Bogotá’s Transmilenio results in average time savings of 32 percent (20 minutes) per trip compared to the traditional bus system. This represents a savings of more than 10 hours per month for the average rider. Transmilenio has also been able to abate 1.9 million tons of carbon dioxide equivalent between 2001 and 2010. The system has scrapped more than 2,100 old buses since its inception; decreased accident rates by 90 percent in the corridors where the system operates; and reduced noise levels by 3-10 decibels.

“I was a bus driver for 13 years, but I’ve worked the last five months as a bus operator. Before that, my job was very stressful, especially because the work day was very long. I complied with the owner’s passenger limit and, and after 310 passengers, the profits belonged to me. I made sacrifices to get them. Now, my life has changed 100% because I work for three hours, rest for one, and then I continue until I complete eight working hours. I have time for myself, my family, to go to the doctor, to study. Also, society now views me in a different light, and no longer looks down on me as before. Now I have goals set for myself: owning a house and having a well-established family.” John Jairo Mina Vidal. Bus Operator (Taken from the book Transport on a Human Scale. The World Bank)

5
of the six Bank-financed Bus Rapid Transit systems are operating, as of end of 2012.