A Vision for an Emerging Senegal

March 22, 2013
Senegal aspires to be a high middle-income country by the next decade, but has been stuck in low-growth equilibrium since 2006. To exit this situation, the newly elected national government have developed an ambitious program to tackle these challenges. The National Social and Economic Development Strategy (SNDES) intends to reverse this downward trend by increasing the productivity of Senegal’s whole economy, public and private, both of which are underperforming compared to the past and to its peers. The new joint Country Partnership Strategy (CPS) for fiscal years 2013 to 2017, of the International Development Association (IDA, International Finance Corporation (IFC) and Multilateral Investment Guarantee Agency (MIGA), intends to support SNDES priorities and Senegal's efforts to engage in a recovery and a higher growth and shared prosperity path over the medium-term (over the next 5 years).

Senegal has not shared the rapid growth experienced by many other Sub-Saharan African countries over the last decade. Poor governance has slowed progress in poverty reduction. Natural disasters such as droughts and flooding have slowed growth and increased the vulnerability of the whole economy. Overall, the private sector’s ability to stimulate the economy has been limited due to a weak investment climate and declining competitiveness, underpinned by weak governance systems and poor implementation follow up. Senegal's Human Development Index (HDI) is 0.459, ranked 155 out of 187 countries with comparable data, compared to an SSA average of 0.463 in 2012. To address these challenges, Senegal needs to implement policies that improve governance, increase resilience to external shocks and are conducive to accelerate inclusive and sustainable growth, create jobs, and improve service delivery to protect the poor and vulnerable.

The SNDES is the translation of the change desired by the Senegalese people, who by their votes in 2012 demanded public policies resulting in sustainable economic growth capable of generating employment especially for the youth, and opportunities to reduce poverty in Senegal significantly. The new Country Partnership Strategy (CPS) 2013-2017 focusing on economic growth, job creation and poverty reduction for an emerging Senegal is fully aligned to the government’s strategy (SNDES) and priorities. The World Bank Group’s (WBG) support is anchored on one foundation—strengthening the governance framework and building resilience—and features two pillars: (i) accelerating inclusive growth and employment, and (ii) improving service delivery. Opportunities for women will be strongly improved, including regarding land access, while the whole country will benefit from the experience of Performance Contracts as an innovative instrument being implemented to improve the quality and efficiency of the higher education sector.

Long-Term Water Sector Project: The project closed in June 2009 with highly satisfactory outcomes. As a result of the project:

The Bank is continuing its involvement in second generation reforms to the sector, via the ongoing Water and Sanitation Millennium Project.

IDA is a traditional supporter of the Senegalese education system. Since 2000, with technical support from IDA, the Government of Senegal has prepared a ten-year development program, the PDEF (Programme Décennal de l’Éducation et de la Formation). The achievements of the second phase of the program, which closed in December 2012, are as follows:

Important progress in reducing the gender disparities as shown in the improvement in the parity index below:

Given the important achievement in terms of access, IDA – together with a coalition of other donors – is supporting the country education sector program; focusing on improving the learning outcomes

At project closing in December 2012

The current Bank portfolio under supervision has a total of thirteen national IDA-financed operations, four regional IDA-financed operations, and seven trust fund operations. The total commitment for all active projects is US$890 million, of which US$334 million has been disbursed (cumulative disbursement of 38 percent). The largest share of the portfolio is in Education (22 present) followed by Energy (19 present), Urban Development (15 present), Agriculture, and Transport (12 present each).

International Finance Corporation (IFC): The IFC's current committed portfolio in Senegal, as of September 30, 2012, was US$98 million invested in 12 companies, composed of six loans, six equity investments and two guarantees.

MIGA: As of September 30, 2012, MIGA’s gross exposure in Senegal was US$165.5 million, equivalent to 9 percent of MIGA’s portfolio in Sub-Saharan Africa (SSA) and 30 percent in West Africa (Côte d'Ivoire, Ghana, Guinea, Guinea-Bissau, and Mali). This exposure is largely concentrated in infrastructure, with over US$156 million.

Most bilateral and multilateral development agencies have an active presence in Senegal. Considerable progress has been made in recent years in harmonizing development assistance in Senegal, consistent with the principles articulated in the Paris Declaration and Accra Agenda. Early in 2008, donors adopted a Memorandum of Understanding - the Framework Agreement on Budget Support (Accord Cadre pour les Appuis Budgtaires-ACAB), which includes the European Union, France, the Netherlands, Canada, Germany, the African Development Bank and the World Bank. Substantial progress has been made with the adoption of joint monitoring indicators. The Prime Minister convenes the donor community on a quarterly basis to assess progress on the achievement of Poverty Reduction Strategy Paper (PRSP) objectives.

The World Bank Group will support the government’s efforts to accelerate growth and create jobs, including through improved macroeconomic stability to create more fiscal space for investment. This approach, coupled with support to the government to improve the overall business environment, should lead to a drop in government expenditures in some sectors (for example, energy), and an improved macroeconomic and fiscal framework. The WBG will assist the government to improve the allocation and effectiveness of expenditures and its impact on results particularly in the social sectors. The Bank will also continue working with the government to increase accountability and transparency in the management of public resources, and to improve resilience of the population against natural and economic shocks.

In a region where political instability has grown in many countries, it is necessary for Senegal to remain one of the most stable countries in Africa. The country has strengthened its democratic structures considerably, including with a recent election characterized by a high degree of transparency, and universal acceptance of the results, concluded by a second democratic transition since the first in 2000.

Ndeye Fatou Ndiaye – Rural Community of Notto Diobass:  “As women, for several years, we did not have access to land. We have been persuaded that women are not legally allowed for that. Thanks to capacity building we benefitted from the Sustainable Land Management Project (SLM), we discovered our rights, and we vowed to get access to land. We advocated our case before the local government. From now on, woman can legally get 1 to 2 hectares depending on her capacity to value the land from the Rural Council. Several women are now cultivating their own land, and each women’s group can also have access to 5 hectares of collective land from the Rural Council. This new status has transformed our lives because we earn more money than before and we can have more if we organize ourselves to have better access to the market. The World Bank gave us more capacity and now that the project is closed, we are still continuing practices to regenerate lands, to produce bioenergy and to develop more agricultural activities. We are also using our experience to train women outside our villages so they can regenerate lands for agriculture.  The SLM particularly benefited women (53 percent) and one of its impacts is to reverse the rural exodus because young people are coming back from cities, essentially from Dakar, because there are more lands regenerated and available for agriculture.” 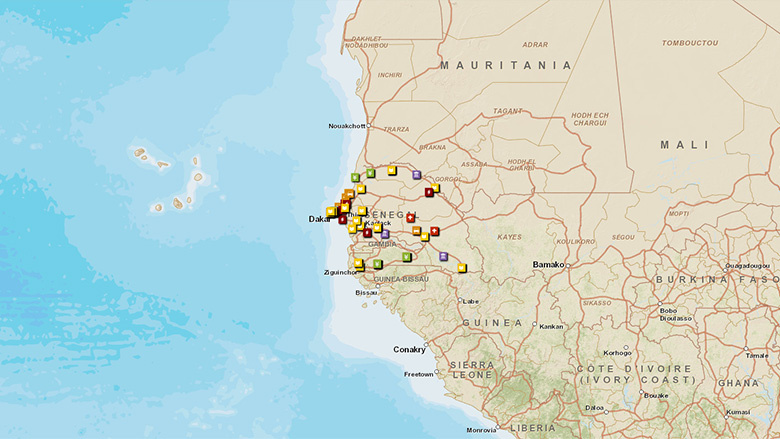