March 19, 2013
After more than 10 years of crisis marked by violent conflict, Côte d’Ivoire is the archetypal promising country whose development has been compromised by conflict and insecurity. The conflict brought economic activity to a standstill, severely affected basic social service delivery and further damaged the country’s social fabric. Some progress has been made on the reconciliation agenda with the establishment of a Dialogue, Truth and Reconciliation Commission (DTRC). The World Bank Group-financed program will continue to help government deliver essential services and accelerate growth, while contributing to national reconciliation through the improvement of social and physical infrastructure and promoting good governance.

The new authorities face myriad challenges as they bid to return the country to a path of economic growth. Three such challenges are of particular importance: to avoid further violence between rival factions (security); to manage the fall-out from investigations into the atrocities (reconciliation); and to establish a stable government and to restart the economy (reconstruction). The Bank is working very closely with the International Monetary Fund (IMF) to support Côte d’Ivoire efforts and progress towards the Heavily Indebted Poor Countries (HIPC) Completion Point.

A Country Partnership Strategy (CPS) for the period FY10-FY13 was discussed by the World Bank’s Board of Executive Directors in April 2010 with four key pillars: (i) strengthening economic governance; (ii) infrastructure renewal; (iii) agricultural production and export promotion; and (iv) private sector development. As of January 31, 2012, the IDA-financed portfolio in Côte d’Ivoire consists of nine active projects with total commitments (including regional projects) of US$655 million, with an undisbursed balance of US$260 million (a disbursement ratio of 60 percent). The Bank also supervises seven trust funds representing commitments of US$9 million. These trust funds include three State and Peace-building Fund (SPF) grants.

Following the re-engagement of the Bank in 2008, tangible results have been achieved with International Development Association (IDA) financing.

Under the Post-Conflict Assistance Project (PCAP), as of January 31, 2012:

Under the Emergency HIV/Aids Project, the following results have been achieved as of June 2012:

The Bank works closely with other multilateral and bilateral technical and financial partners in Côte d’Ivoire, including inter alia, the African Development Bank, the European Union, the French Development Agency, the International Monetary Fund (IMF), the UN System, Germany, Japan, the United States Agency for International Development (USAID), etc. The Ministry of Finance recently launched the preparation of an aid management framework that will include a donor coordination mechanism. The Bank has also been actively involved in the international post-crisis support to Côte d’Ivoire, notably through two Roundtables co-organized with the African Development Bank on the sidelines of the 2010-2011 World Bank/IMF Annual Meetings.

Adjustments to the Country Partnership Strategy for 2010-2013 will be derived from the progress report on its implementation, in an ongoing effort to improve the relevance, timeliness and significance of the Bank’s response. The World Bank Group-financed program will continue to help government deliver essential services and accelerate growth, while contributing to national reconciliation through the improvement of social and physical infrastructure and promoting good governance.

18,000
ex combatants and youth at risks have participated in economic reintegration activities 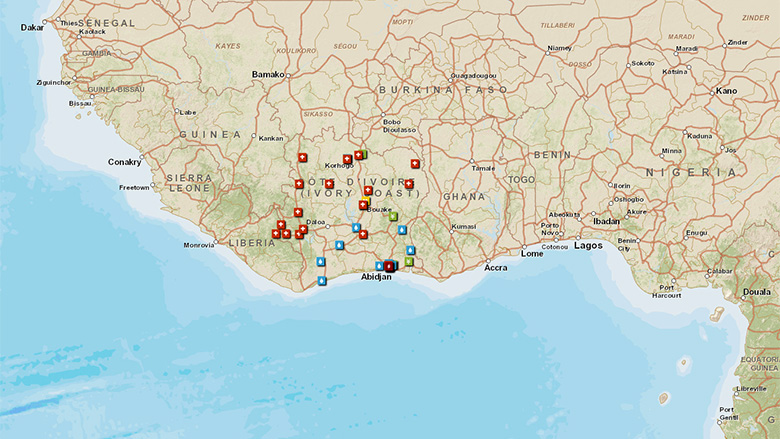