Demobilization and Reintegration in the Democratic Republic of Congo (DRC)

March 11, 2013
Working in concert with the United Nations and the Congolese Government, the International Development Association (IDA) helped finance a regional peace process, demobilize the Congolese armed forces, reintegrate ex-combatants into society, and strengthen domestic institutions. Over 100,000 weapons were collected, 31,738 children were demobilized and reunited with parents, and over 100,000 ex-combatants were demobilized, most of whom received reintegration assistance.

In the 1990s, the Democratic Republic of Congo (DRC) suffered from its violent surroundings, as spillover from the Rwandan genocide ignited a war involving ten other African countries, spurring the formation of Congolese armed groups, killing 3.5 million, and displacing 2 million. Violence continued in eastern Congo well into the 21st Century, despite peace agreements that demarcated foreign troops to be withdrawn from DRC by 2004 under the monitoring of South Africa and the United Nations Organization Mission in the DRC (MONUC).  As neighboring armies, foreign armed groups, Congolese armed forces, and Congolese irregular armed groups remain in the DRC, foreign troops remain a priority for MONUC. Ex-combatants struggled to rejoin productive society, and often suffered from severe psychological trauma, an issue particularly prevalent among child soldiers. Thus, the rebuilding of a healthy DRC would require more than demobilization.

Congolese armed forces were targeted by a National Program for Demobilization and Reintegration (PNDDR), financed by IDA and donor partners, while irregular armed groups were addressed by a set of local agreements. Nevertheless, remaining violence motivated IDA, along with 13 donors and regional governments, to establish the Multi-Country Demobilization and Reintegration Program (MDRP) in 2002. The MDRP was designed to finance and coordinate regional peace while working with the DRC to encourage former combatants to return to civilian life through the Emergency Demobilization and Reintegration Program (EDRP). The EDRP and the government fostered sustainable social development and macroeconomic stability by demobilizing ex-combatants and supporting their socio-economic reintegration. Reinsertion packages consisting of $300 plus a bicycle and reintegration packages of $600 were granted to ex-combatants. The EDRP established provincial offices during reintegration, where their closer proximity to ex-combatants allowed quicker reactions to potentially volatile situations. A Joint Operations Plan was formed to have MONUC facilitate the integration of the former DRC army and rebel groups into a nascent national army by combining army integration and demobilization, providing combatants the choice to become state soldiers. Special projects windows provided the United Nations Development Programme (UNDP) with $10 million to respond to immediate disarmament needs and a set of grants to the United Nations Children’s Fund (UNICEF) and four nongovernmental organizations (NGOs) facilitated the reintegration of 30,000 children associated with armed forces.

The EDRP objective, design, and implementation reflected objectives for peace and stability in the Bank’s Country Assistance Strategy, while dovetailing with government development priorities.

Virtually all ex-combatants received some reintegration support, most receiving their Transitional Subsistence Assistance within nine months. Cash payments boasted an error rate of only 0.6 percent. By project closure in September 2011, 75 percent of male and 69 percent of female ex-combatants were engaged in productive economic activities or schooling in their communities.

MONUC played a crucial role in facilitating the disarmament process, particularly in regards to foreign armed groups. The UNDP and UNICEF were other United Nations organizations the Bank was able to bring into the process and provide funds for their operations. South Africa filled the role of the Third Party Verification Mechanism during the process of expelling foreign armed groups. The MDRP provided the Bank with the means to create a synergy with the national programs of the Great Lakes region, facilitating information exchanges, regional impact evaluation, and increased transparency.

As EDRP ends with the transitional reintegration of targeted ex-combatants, the government continues to guide demobilization and reintegration while the African Development Bank provides reintegration support for ex-combatants in the provinces of Katanga, Maniema, North Kivu, Orientale, and South Kivu. This program provides vocational training and promotion of self-employment in agriculture for a targeted 28,500 ex-combatants, 1,000 of whom are women.

Richie Elodie Mboungou, of Sibiti, received support to launch an income generating activity. She explains: “With the 100,000 francs I received in the first tranche of my micro project grant, I started a small retail business in Sibiti. I bought my inventory in Pointe-Noire. Thanks to the profits, I was able to purchase a ticket to come to Brazzaville.” 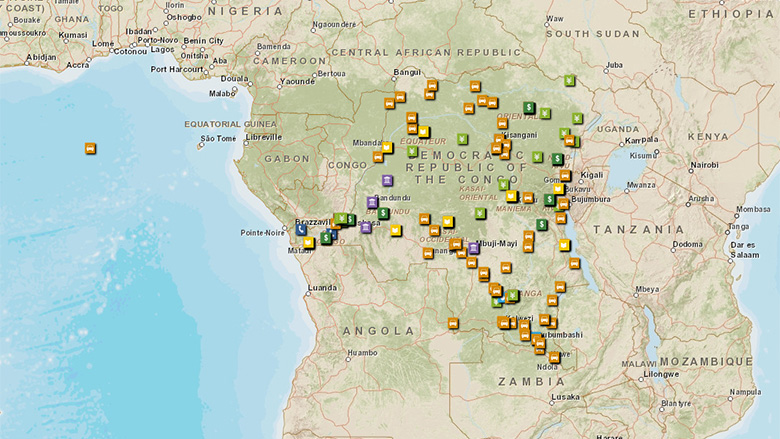