February 8, 2013
The Multisectoral HIV/AIDS, Health, and Education Emergency Support Project (MHPP) aimed to assist Central African Republic in responding to urgent social needs such as prevention of malaria, increased access to water supply, improved primary education, and access to prevention treatment, and mitigation of HIV. As of March 2012, which is when the project closed, 118,862 people were tested, including 10,465 pregnant women, antiretroviral treatment was provided to 1,624 adults and 95 children, and 45 laboratory staff were trained in blood transfusion while 16 labs and 15 health facilities were provided generators and medical equipment, respectively.

At the project’s original appraisal in 2000, CAR suffered from political instability, armed conflict, and a poverty rate of 67 percent as recurrent conflicts had pushed CAR to 165 out of 173 countries in the Human Development Report, with life expectancy an estimated 44.3 years. Periodic mutinies and coup attempts destroyed infrastructure and social services, delaying project implementation until 2007, when national elections and peace agreements with key rebel groups had been achieved. Sporadic violence persisted as IDA re-engagement focused on improving delivery of basic social services and HIV/AIDS prevention and control. In 2001, the Joint United Nations Programme on HIV/AIDS (UNAIDS) estimated 10.7 percent of the population aged 15-49 was living with HIV/AIDS, 13,000 to 23,000 of whom were killed by the disease each year. Basic healthcare, primary education and access to water and sanitation are often inaccessible. This situation drove infant mortality to 106 per 1,000 live births, and the percent of malnourished children under 5 years old to 19 percent. Maternal mortality was high, 20 percent of children under 5 years old had malaria, and the teacher-pupil ratio sank to around 1:100, causing 30 percent of pupils to repeat grades and 40 percent not to finish primary school.

The project was designed to assist CAR in response to urgent social needs, such as increased access to water supply, improved primary education, prevention of malaria and access to prevention treatment and mitigation of HIV. The project consisted of the following four components:

Domestic civil society organizations were the main project partners, as the $5.72 million component was focused on supporting and strengthening the work of the Ministries of Health, Education, Defense, Social Affairs, and Public Services.

The Global Fund to Fight AIDS, Tuberculosis and Malaria will fund 31 Projet multisectoriel 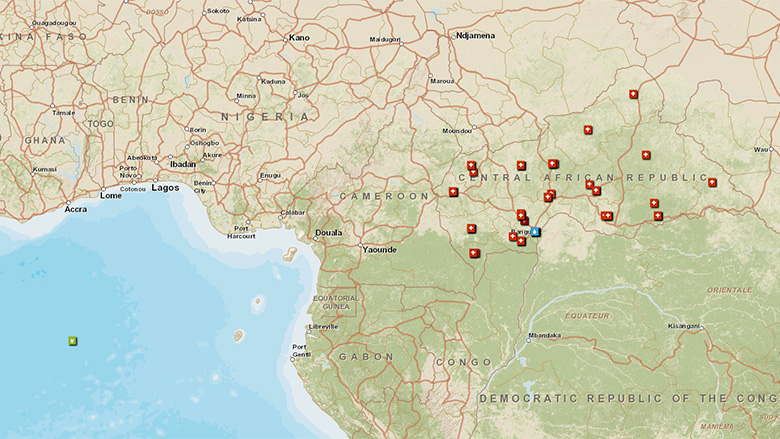