January 31, 2013
The Burundi Emergency Demobilization and Transitional Reintegration Project (EDTRP) aimed to help consolidate peace in the aftermath of the violence that has plagued the Great Lakes region for much of the past twenty years. Demobilization, reinsertion and socio-economic reintegration support for ex-combatants was provided, with a particular focus on children associated with armed forces, women, and disabled ex-combatants. As of December 31, 2012, 6,884 combatants have been demobilized including 243 women, 170 disabled people, and 626 minors.

Open conflict erupted in Burundi following the 1993 assassination of the democratically elected President Ndadaye. A 2000 peace agreement laid the framework for Demobilization and Reintegration (D&R) in Burundi, though two major armed political parties and movements, the National Council for the Defense of Democracy – Forces for the Defense of Democracy (CNDD-FDD) and the National Forces of Liberation (FNL-PALIPEHUTU), continued their armed struggle against the government. A cease-fire agreement was signed between the Government of Burundi (GoB) and the CNDD-FDD in 2003, and the group’s leadership was integrated into the government, subsequently winning the democratic elections in 2005.

In response to a request made by the GoB to IDA, an initial operation, the Burundi Emergency Demobilization, Reinsertion, and Reintegration Program (EDRRP) was approved in 2004. The US$$77.8 million project (US$36 million IDA grant and a US$41.8 million grant from the Multi-Country Demobilization and Reintegration Program (MDRP)) demobilized over 23,000 adult ex-combatants, and released over 3,000 children associated with fighting forces by its termination in 2008. However, demobilization was not yet complete, leading to the implementation of the EDTRP in 2009 to support the GoB’s efforts to continue building peace and stability through D&R of the last two remaining armed groups, the FNL and FNL-Dissidents.

The EDTRP aims to demobilize combatants and provide transitional socio-economic reintegration support, with a particular focus on the provision of such support to vulnerable groups, including:

IDA has contributed US$10 million in financing to the current project.

The project is co-financed by a Multi-Donor Trust Fund (MDTF) with contributions from the European Commission, and the Governments of Belgium, the Netherlands, and Norway. The project was developed in consultation with the above-mentioned donors, as well as representatives from the African Union, France, South Africa, the United Kingdom, and the United Nations mission in Burundi (BINUB).

The project has been extended until December 31, 2013, with a focus on accelerating delivery of medical services to disabled ex-combatants.  Transitional socio-economic reintegration support associations comprised of ex-combatants and community members. Psychosocial support will continue with the identification and treatment of psychiatric cases, as well as psychosocial support at the individual, family, and group level. Additional financing, using the balance of the MDTF and a government counterpart contribution, will support the GoB to provide lodging for severely disabled ex-combatants, and continue providing social reintegration activities with a focus on reconciliation and conflict resolution at the local level, specifically addressing the potential for violence and intimidation in communities through a conflict mitigation initiative.

Désiré Micomyiza, an ex-combatant who owns and manages a video shop in the northern province of Muyinga, Burundi explains, “With my reinsertion support, I started this studio project. Then, with my transitional economic reintegration support, I expanded the shop. I consider this a success as it provides a livelihood for me and my family.” Anicet Miburo says, “With the transitional reintegration support, I chose to purchase a mill. I saved money and was able to purchase a second mill after receiving the support from the project”. When Godelieve Nimenya learned woodworking through project, she said, “my friends and I understood that women are also capable of doing what men do.”

6,884
Number of combatants who have been demobilized, including 243 women. 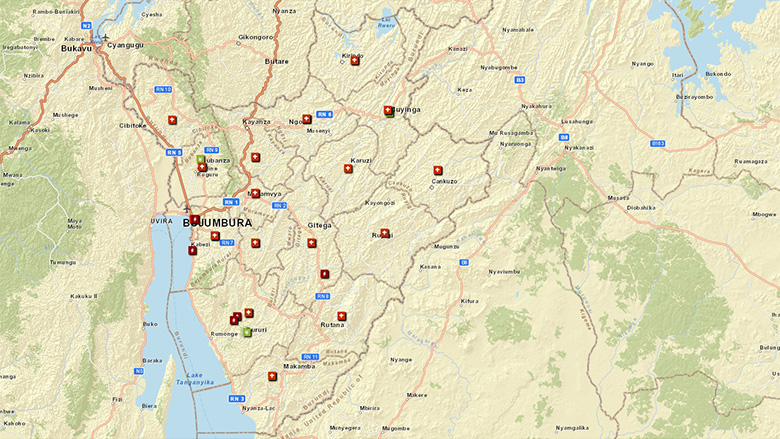