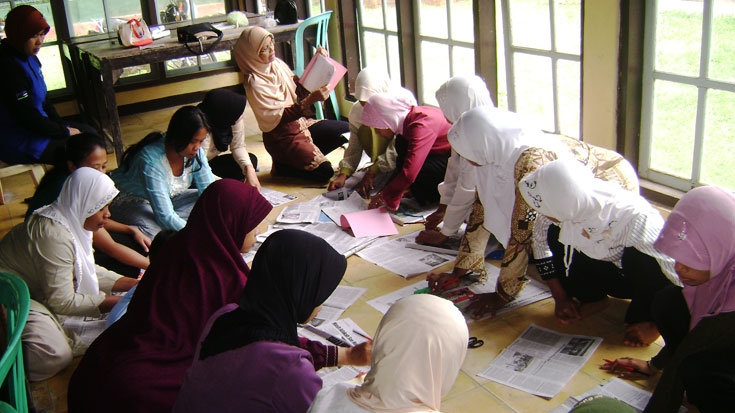 The Female-Headed Household Empowerment Program (PEKKA), which began in 2001, is operating in 19 provinces in Indonesia and has 750 groups in 475 villages as of March 31, 2012. PEKKA has benefitted around 20,000 women and approximately 52,000 of their family members by improving their livelihood and well-being.

The origins of the PEKKA program are from two different sources. First, as early as 1999, the Ministries of National Development Planning (Bappenas) and Home Affairs (Kemendagri) asked the World Bank to design targeted programs for vulnerable widows. The National Statistics Board was showing high poverty rates among female-headed households, and further poverty assessments also showed that the incidence of poverty among widows accounted for a significant share of the rural very poor, particularly in the conflict provinces. Second, information from quantitative and field reviews of World Bank-financed national community development projects showed that vulnerable widows were not joining collective decision-making and were especially vulnerable to second-generation poverty coming from their catastrophic loss. Female single household heads generally occupy a marginal position in all aspects of life and are denied opportunities. Prior to PEKKA, no development project in Indonesia had ever worked with widows, especially in areas of large-scale conflict.

PEKKA started with a vision of female heads of households contributing to building a prosperous, gender-equal and dignified society. PEKKA’s mission is to:

" I am very happy because I never dreamed of having a large motor boat. I am the first poor widow to own a motor boat in my area. And I was able to repay my loan from PEKKA in just one year. "

a widow who runs a seaweed growing business in Buton Island, Southeast Sulawesi

The PEKKA program was initiated with Japan Social Development Fund (JSDF) grants that complemented an International Bank for Reconstruction and Development (IBRD) loan and an International Development Association (IDA) credit to Indonesia for the Kecamatan Development Project (KDP). The KDP project supported a longer-term participatory program for poverty reduction and assistance with post-disaster reconstruction. The total amount of the loan and credit for KDP 1 to KDP 3 is US$919.2 million. The JSDF program contributed over US$10 million for vocational and leadership training for PEKKA members, literacy, management skills and book-keeping classes and health education for microcredit loans, a social fund for older women and a scholarship fund for children whose mothers are unable to pay for their schooling.

The PEKKA program has expanded to 19 provinces. In its microcredit program, on average after three years a sub-project becomes financially sustainable. Organizational sustainability is achieved by building a significant cadre of new leaders. At the local level, the program has set up several local training centers, where poor women receive education about their rights and entitlements, access to information about social services, and training in how to run for local offices. PEKKA is being used under the World Bank's Justice for the Poor program to coordinate a network of trained paralegals to promote legal literacy and provide practical support for women to access the religious courts to formalize their marriages and divorces.

52,000
family members of 20,000 women have improved their livelihood and well-being