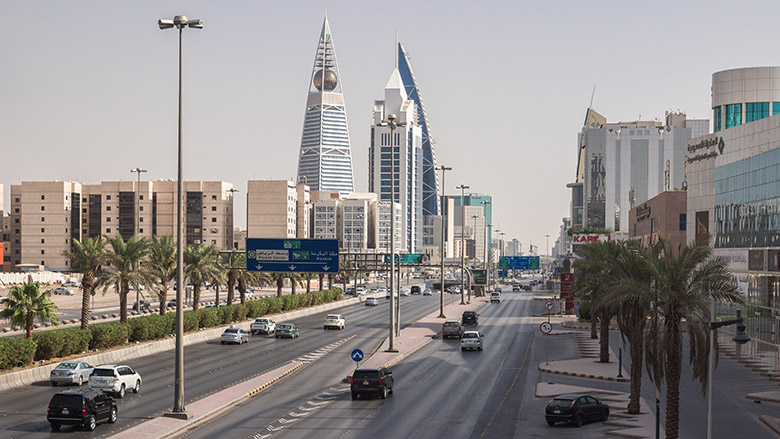 Recent developments: Growth in the Middle East and North Africa is estimated to have slowed sharply to 1.8 percent in 2017 from 5 percent the year before. The slowdown in growth among oil exporters, driven by oil production cuts and continued geopolitical tensions, has more than offset a pickup among oil-importing economies. Fiscal adjustments also held back growth among both oil-importing and oil-exporting economies in the region.

Growth among members of the Gulf Cooperation Council (GCC) slowed, reflecting lower oil output. Growth in Saudi Arabia fell to 0.3 percent in 2017 from 1.7 last year amid oil production cuts and fiscal consolidation, and the United Arab Emirates eased to 1.4 percent. The diplomatic rift between Qatar and neighboring economies is estimated to have weighed somewhat on Qatar’s economy, but the impact on neighboring economies has been limited. After an exceptionaly high growth rate in 2016 due to lifting of sanctions, growth in the Islamic Republic of Iran moderated in 2017, contributing sizably to the moderation in regional growth.

Among the region’s oil importers, the Arab Republic of Egypt’s growth remained broadly stable at 4.2 percent in fiscal year 2017 (July 1, 2016 – June 30, 2017). An exchange rate devaluation had a positive impact on competitiveness in that country, contributing to strong industrial production, investment, and exports in the second half of the fiscal year. Morocco’s growth jumped to a 4.1 percent rate on a strong rebound in agricultural production.

Outlook: Growth in the region is expected to accelerate to 3 percent in 2018 and 3.2 percent in 2019, assuming a moderation of geopolitical tensions and a modest rise in oil prices. GCC economies are anticipated to lead stronger growth in the region, supported by easing fiscal adjustment, infrastructure investment such as the UAE Expo 2020, and reforms to promote non-oil sector activity. Growth among the GCC countries as a group is forecast to pick up to 2 percent this year from 0.7 percent in the year just ended.

Growth in Saudi Arabia is anticipated to advance to 1.2 percent. The Islamic Republic of Iran, the second largest economy in the region, growth is anticipated to rise to 4 percent in 2018.  Strengthening private consumption and investment are anticipated to support stronger growth in the region in general. In Algeria, a more expansionary fiscal stance than previously planned is expected to raise growth in the short-term. Iraq’s activity is expected to improve amid more favorable security conditions.

Growth among some oil importers in the region is anticipated to improve in 2018 as business and consumer confidence are boosted by reforms and as external demand improves. Egypt’s economy is expected to expand by 4.5 percent in FY 2018 as ongoing reforms and improved business climate provide further impetus to industrial activity and exports.

Risks: Risks to growth in the region vary across oil exporters and importers, but are generally tilted to the downside. Geopolitical risks remain elevated, and are complicated by intra-regional diplomatic tensions. Oil importers are vulnerable to spillovers from armed conflicts in fragile economies, including Libya, the Syrian Arab Republic, and the Republic of Yemen. Conflicts have interrupted basic access to food services, education and health, and the protracted displacement of people in the fragile economies has generated a refugee crisis that creates economic pressures for host countries and amplifies fundamental health and welfare challenges.

Weaker-than-expected oil prices would cloud growth prospects for the region’s oil exporters. While the impetus for reforms has gained momentum in the region, the uncertainty regarding the scope, depth and  sustained nature of these reforms may limit their positive impact. 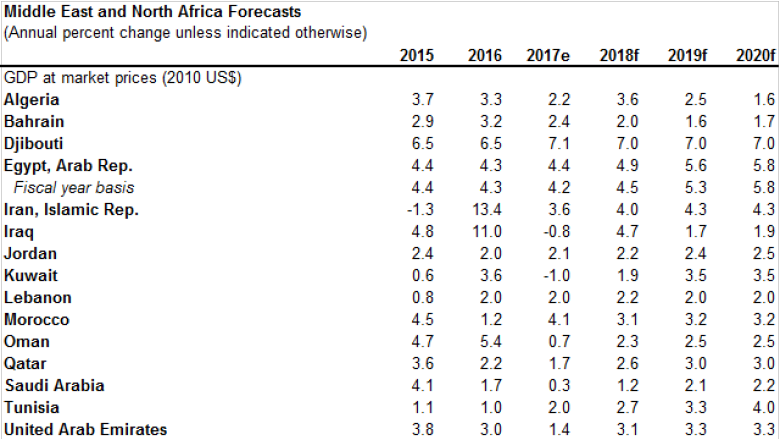 Source: World Bank.
Notes: e = estimate; f = forecast. World Bank forecasts are frequently updated based on new information and changing (global) circumstances. Consequently, projections presented here may differ from those contained in other Bank documents, even if basic assessments of countries’ prospects do not differ at any given moment in time.