Coping with a Dual Shock: COVID-19 and Oil Prices 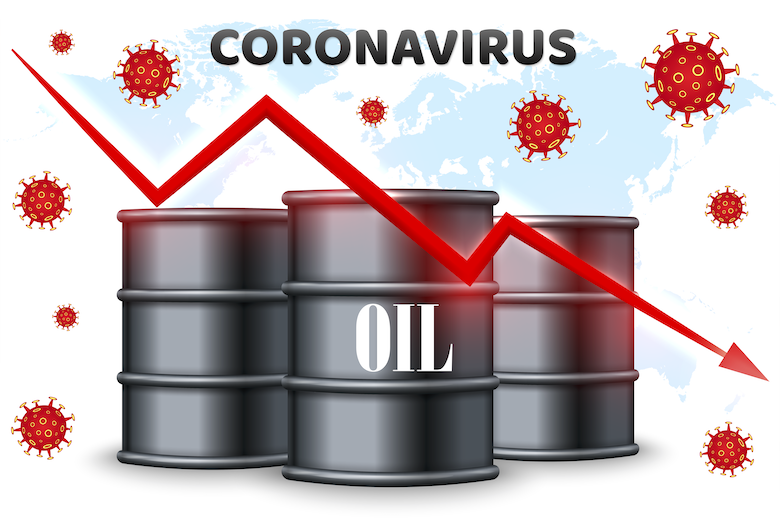 Countries in the Middle East and North Africa (MENA) face a dual shock from the coronavirus pandemic (COVID-19) and a collapse in oil prices. To deal with these two shocks, authorities should sequence and tailor their responses. They should focus first on responding to the health emergency and the associated risk of economic depression. They should postpone fiscal consolidation linked to the persistent drop in oil prices and its spillovers until the recovery from the pandemic is well underway.

Countries in the Middle East and North Africa (MENA) face both the coronavirus pandemic (COVID-19) and a collapse in oil prices.

The novel coronavirus — which Chinese authorities first reported to the World Health Organization (WHO) on December 31, 2019 — has spread globally. The virus has infected more than 300,000 people and caused about 13,000 deaths as of March 22, 2020. More than 90,000 individuals have recovered.

The virus has seriously affected Iran and has spread to other MENA countries. As of March 22, 2020, Iran had reported more than 20,000 infections and more than 1,500 deaths. The rapid rise in infections there is disrupting the country’s production and trade. Other MENA countries have also reported infections and also imposed preventive measures. As of March 22, 2020, Saudi Arabia had reported 511 cases; Qatar, 481; Bahrain, 332; Iraq, 233; Kuwait, 188; and the United Arab Emirates UAE), 153.1 Algeria, Egypt, Lebanon, Morocco, and Tunisia have also reported infections. The ability to contain the virus depends on the strength of the region’s public health systems—which, with exceptions such as Yemen and Djibouti, the WHO ranks relatively high among the world’s 191 health systems (Tandon and others, 2000). Still, the need for transparency and freer information flow is pervasive. The region risks dramatic consequences if transparency and information flow issues are not addressed expeditiously during this health crisis.2

The virus will not only claim lives. Its spread will confront MENA countries with both a negative supply shock and a negative demand shock (Baldwin and Weder di Mauro, 2020).

The negative supply shock comes first from a reduction in labor — directly because workers get sick with COVID-19, the disease caused by the virus, and indirectly due to travel restrictions, quarantine efforts and workers staying home to take care of sick family members or children. Supply will also be affected by a reduction in materials, capital and intermediate inputs due to disruptions in transport and businesses in MENA countries.

The negative demand shock is both global and regional. Economic difficulties around the world and the disruption of global value chains will reduce demand for the region’s goods and services, most notably oil and tourism. The reduction in GDP growth in China is expected to have a limited effect on tourism activity in MENA (Chart 1). That said, the spread of the virus to other countries, especially in Europe, and the preventive health measures they have taken is expected to have a much larger impact on MENA. Regional demand will also decline as the abrupt reduction in regional business activity and concerns about infection reduce travel. In addition, uncertainty about the spread of the virus and the level of aggregate demand would hurt the region’s investment and consumption. Collapsing oil prices further depress demand in MENA, where oil and gas is the most important sector in many economies. Finally, potential financial market volatility could further disrupt aggregate demand.

Chart 1: Estimated Impact of a Decline in China’s per capita GDP on Chinese Arrivals to MENA and the Rest of The World 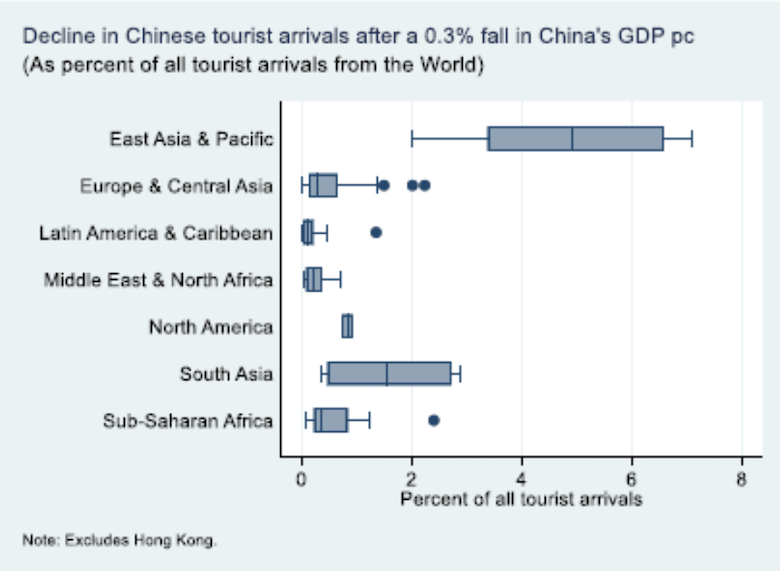 The negative supply and demand shocks associated with COVID-19 are expected to be relatively short-lived, but dramatic, and to affect many sectors and countries. Demand and supply will recover once the pandemic subsides — and how quickly that occurs depends on the length and depth of the disruption.

In addition to the shock from COVID-19, the breakdown in negotiations between the Organization of the Petroleum Exporting Countries (OPEC) and its allies led to what will likely be a persistent collapse in oil prices. On March 5, 2020, OPEC proposed a 1.5 million barrel per day (mb/d) production cut for the second quarter of 2020, of which 1 mb/d would come from OPEC countries and 0.5 mb/d from non-OPEC but aligned producers, most prominently Russia. The following day, Russia rejected the proposal, prompting Saudi Arabia — the world’s largest oil exporter — to boost production to 12.3 mb/d, its full capacity. Saudi Arabia also announced unprecedented discounts of almost 20% in key markets. The result was an immediate drop of more than 30% in prices and continuing declines since. The benchmark West Texas Intermediate (WTI) crude oil price reached a low of $22.39 per barrel in the intraday session on March 20, 2020 — less than half the price at the beginning of the month. The futures curve suggests that the market expects oil prices to recover slowly — not reaching $40 per barrel until the end of 2022 (Chart 2). 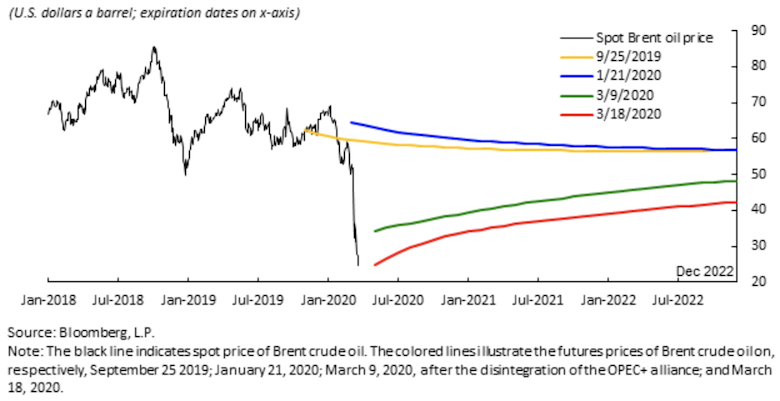 The two shocks of COVID-19 and oil price collapse are intertwined, yet distinct. On one hand, the demand component of the oil shock is linked to the sharp reduction in oil consumption stemming from precautionary measures to stop the spread of the virus, including lockdowns, which have brought economies around the world to a standstill. The estimated 10% reduction in oil consumption from 2019, or about 10 mb/d, is the result of reduced air and road travel, according to Rystad Energy, the Norwegian research company. While the depth and duration of the pandemic shock is uncertain, it is expected to be short-lived. Indeed, the severity of the shock has triggered unprecedented domestic measures in advanced and developing countries, and the imperative of global coordination to eradicate the virus will hopefully prevail. The international financial institutions are critical to the efforts of developing countries that have acute balance of payments or fiscal problems, and are now fighting COVID-19. These institutions, which can offer zero- to low-interest financing and long maturities, are best-equipped to help countries in MENA and other developing regions deal with the dual shock. The cost of inaction, both economic and social, would be large. The payoff for action is large. Previous experience in fighting smallpox suggested that the benefit-cost ratio for assisting its eradication of the disease exceeded 400-1 (Barrett, 2007).

Once the spread of the virus is stopped, the preventive measures at the root of the economic recession will be rolled back. The speed of that recovery will depend on how swiftly and decisively governments take measures to mitigate the economic and financial dislocations from the health crisis. But the supply component of the oil shock is likely to be persistent and drive oil prices lower for longer. The two shocks differ in their duration but also their likely potential consequences and associated risks of inaction.

When assessing the impact of oil prices on the global economy, economists typically distinguish between supply- and demand-driven oil shocks. Demand-driven shocks are related to the evolution of global demand and as such are not expected to have an independent effect on the global economy. But the supply-driven oil shocks would normally be expected to give an independent boost to the global economy. There are several reasons why they might not — in good part because the financial propagation effects of the collapse in oil prices have caused markets for equities, bonds, and non-oil commodities to tumble.

For MENA countries specifically, lower prices are generally good for oil-importing countries and bad for oil exporters. A simple way to get a sense of the size of the real income effect of an oil price change is to multiply the difference between production and consumption (net oil export) as a share of GDP by the percentage point change in the oil price. For instance, based on hypothetical assumption that oil prices will stay 48% below the 2019 level, Kuwait — where net oil exports account for 43% of GDP — would experience a decline in real income of about 20% of GDP, while importer Morocco would experience an increase in real income equivalent to 3% of GDP (Chart 3).

Chart 3: Back of the Envelope Effect of the Oil Collapse

But in MENA it is likely that lower oil prices will hurt both importers and exporters — exporters directly and importers indirectly from reduced foreign direct investment, remittances, tourism, and grants from exporters.3 4 Some countries, such as those in the Gulf Cooperation Council, still have buffers and should use them. Other oil-exporting countries, such as Algeria and Iran, are exhausting their buffers and will have to rely on flexible exchange rates to manage the current situation and conduct much needed reforms in private-sector development and broader economic transformation. Among net oil importers — such as Egypt, Jordan and Lebanon — a recession will worsen already high levels of public debt.

While COVID-19 has caused a severe supply shock that is expected to increase unemployment and poverty, there is also a sizable feedback loop in terms of demand. Besides the loss of human lives, inaction also risks massive disruptions in supply and demand as well as illiquidity in the financial sector. In other words, the COVID-19 shock could lead to household and corporate bankruptcies, with lasting scars on the economy and society. The disruptions come at a time of discontent in MENA where the streets have been full of protests demanding better governance and an end to corruption.

In contrast, the oil price collapse is a commodity terms-of-trade shock that affects the economy through reduced export receipts and revenues in government coffers. The shock is expected to be persistent and lead to widening twin deficits — in a country’s current balance and its government budget — as well as increased debt if there is no fiscal consolidation.

To deal with the dual shock, authorities should sequence and tailor their responses to the severity of the shocks. They should focus first on responding to the health emergency and the associated risk of economic depression. Authorities should postpone the fiscal consolidation associated with the persistent drop in oil price and its spillovers until the recovery from the pandemic is well underway. In responding to COVID-19, authorities should boost spending on health — including producing or acquiring test kits, mobilizing and paying health workers, adding health infrastructure, and preparing for vaccination campaigns. The authorities should also use targeted cash transfers to vulnerable households and support the private sector, including small- and medium-sized enterprises in the informal sector.

It is paramount to target the large number of workers in the informal sector, who have no safety net. Many of them work hand-to-mouth. Given the large labor share and borrowing constraints in many developing countries across MENA, targeted assistance is vital and should be larger relative to the economy than similar efforts in advanced economies. Successful models of quickly deploying the role of technology, including digital, to fight COVID-19 and target assistance should be analyzed and replicated.5 As mentioned earlier, freeing information flows, increasing transparency and data disclosure to reduce leakages are crucial elements in target cash transfers, which themselves will be essential to ensuring a flattening of the spread of the virus, hastening the economic recovery and limiting the rise in poverty. To limit risk of financial instability, countries in the MENA region should reduce interest rates and inject liquidity in the banking system. Where inflation is low, liquidity injection and targeted cash transfers can be financed by "helicopter money," that is, essentially from money printed by central banks (Gali, 2020).

The battle against the spread of the novel coronavirus and its economic and social consequences will be made more difficult by empty government coffers. Many MENA countries are facing large balance-of-payments and fiscal gaps. Many also carry high sovereign-risk premiums. For those countries, additional foreign borrowing on private markets will be difficult. Moreover, countries with fixed exchange rates will find it difficult to use helicopter money because of the tension between money printing and maintenance of the peg. The region will need much international support to help it navigate an extremely rough patch.

Baldwin, Richard and Beatrice Weder di Mauro. 2020. Mitigating the COVID Economic Crisis: Act Fast and Do Whatever It Takes.