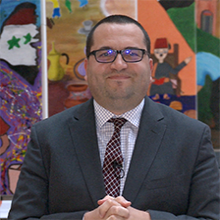 Rabah Arezki is the former Chief Economist for Middle East and North Africa Region (MNA) at the World Bank. Prior to that, Rabah Arezki was the Chief of the Commodities Unit in the Research Department at the International Monetary Fund. He also was a senior fellow at Harvard University’s John F. Kennedy School of Government, a non-resident fellow at the Brookings Institution, an external research associate at the University of Oxford, a resource person for the African Economic Research Consortium and a research fellow at the Economic Research Forum.

Mr. Arezki is the author and co-author of numerous academic journal publications and other publications, including the Quarterly Journal of Economics, the World Bank Economic Review, the Economic Journal, the Journal of International Economics, the Journal of Development Economics and Economic Policy. Mr. Arezki’s research covers a wide array of topics energy and the environment, the macro-development resource rich countries, institutions, human capital, innovation and economic growth.

Mr. Arezki is the co-editor, and co-author of four books including Beyond the Curse: Policies to Harness the Power of Natural Resources, Commodity Price Volatility and Inclusive Growth in Low-Income Countries, Shifting Commodity Markets in a Globalized World, and Coping with the Climate Crisis: Mitigation Policies and Global Coordination (forthcoming).

Many of Mr. Arezki’s research papers have been cited extensively in academic circles and in prominent media outlets such as the Economist, the Financial Times, the New York Times, the Wall Street Journal, Project Syndicate, and the Washington Post. His blog posts including on the recent oil price collapse and its global economic consequences have been viewed over hundred thousand times and have been listed as the most read IMF blog posts three years in a row. Mr. Arezki is also a frequent contributor to Finance and Development magazine, VoxEU, an associate editor of the Revue d’Economie du Développement and was until recently the Editor of the IMF Research Bulletin.

A dual citizen of Algeria and France, Mr. Arezki received his M.S. from the Ecole Nationale de la Statistique et de l’Administration Economique in Paris, M.A. from the University of Paris-1 Pantheon-Sorbonne and Ph.D. in economics from the European University Institute, Florence.