Africa’s Pulse is a bi-annual publication of the Office of the Chief Economist in the World Bank Africa Region. It analyzes the short term economic prospects for the continent and current development challenges, as well as a special development topic.

This issue of Africa’s Pulse suggests that the economic recovery of Sub-Saharan Africa continues but at a slower pace than expected. To accelerate and sustain an inclusive growth momentum, policy makers must continue to focus on investments that foster human capital, reduce resource misallocation and boost productivity. Finally, policies to manage the new risks arising from changes in the composition of capital flows and debt should be at the top of the macroeconomic policy agenda.

Here are the top five highlights from the October 2018 issue:

Average growth in the region is estimated to have risen from 2.3 percent in 2017 to 2.7 percent in 2018, barely keeping up with population growth. Incoming data points to a bumpy ride on the road to recovery. The slower pace of the recovery in Sub-Saharan Africa is explained by the sluggish expansion in the region’s three largest economies. Lower oil production in Angola and Nigeria offset higher oil prices, and in South Africa, weak household consumption growth was compounded by a contraction in agriculture.  Growth in the rest of the region was steady. Several oil exporters in Central Africa were helped by higher oil prices and an increase in oil production. Economic activity remained solid in the fast-growing non-resource-rich countries, supported by agricultural production and services on the production side, and household consumption and public investment on the demand side.

Public debt remained high and continued to rise in some countries, reflecting the recent surge in Eurobond issuances. The vulnerability to weaker currencies and rising interest rates associated with the increased reliance on foreign-currency debt may put the region’s public debt sustainability further at risk. As countries have gained access to international capital markets and nonresident participation in domestic debt markets has expanded, non-concessional debt has increased. The share of foreign currency-denominated public debt rose to 60 percent total debt in 2017, an increase of about two-fifths from 2010-13. 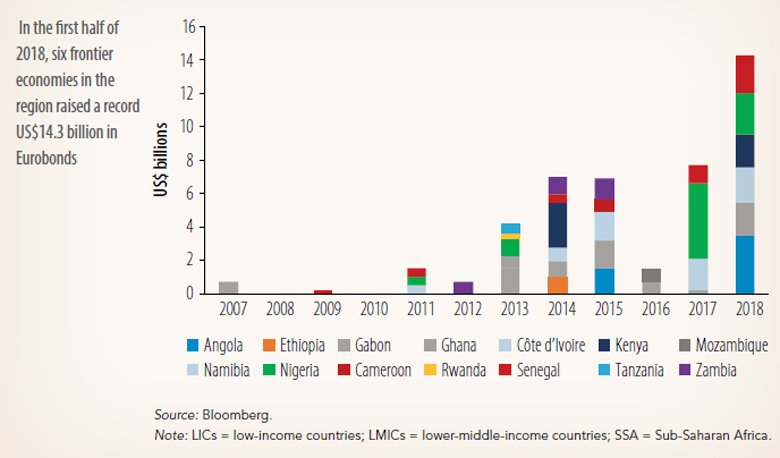 International Bond Issuances on LICs and LMICs in SSA

3.       Economic recovery in the region is set to continue but at a more gradual pace

Growth in the region is projected to increase from 2.7 percent in 2018 to 3.3 percent in 2019, rising to 3.6 percent in 2020, slightly below April forecasts. The recovery is set to continue amid a more challenging external environment, including moderating economic growth among the region’s main trading partners, a stronger U.S. dollar, heightened trade policy uncertainty, and tightening global financial conditions. Against this backdrop, growth may be supported by a modest uptick in oil prices, the easing of drought conditions that had depressed agricultural output, and a rise in domestic demand as policy uncertainty of the past year recedes and investment rises. 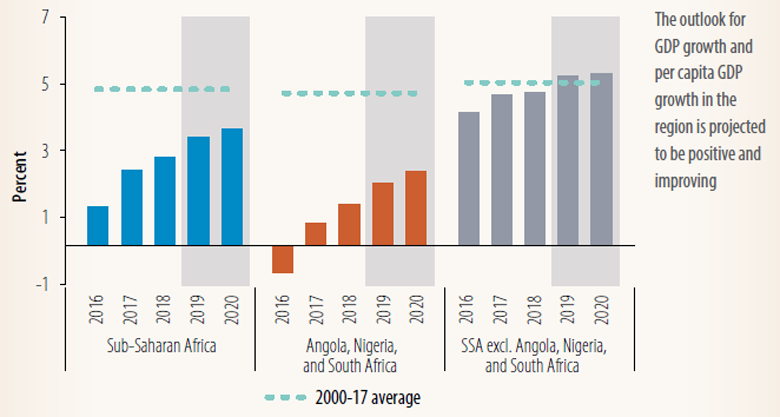 4.       Large global shocks have reshaped the composition of capital flows into Sub-Saharan Africa.

Although foreign direct investment and foreign aid remain the major components of capital inflows, portfolio investment (through international bond issuances) has experienced an uptick since 2013. The change in the composition of capital flows has a higher risk content, as captured by greater vulnerability to commodity prices, global interest rates, and currency movements. Policies and reforms that build resilience to these risks and use foreign capital to raise medium-term potential growth are needed. 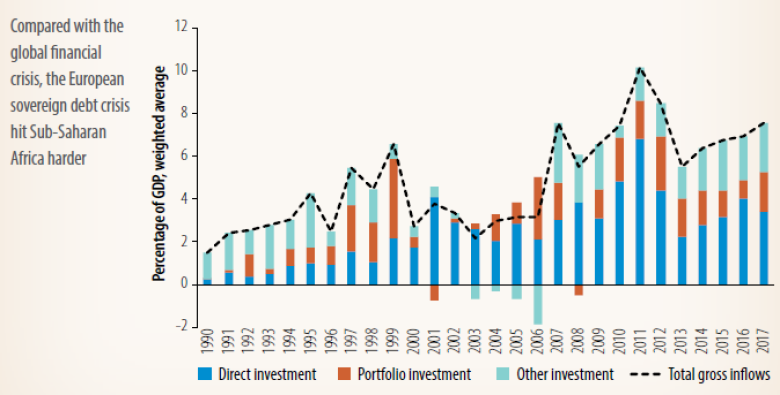 5.       The region’s low productivity is attributed to inefficiencies in the allocation of resources across farms and firms, and these inefficiencies are linked to human capital misallocation.

Labor productivity differences between Sub-Saharan Africa and more advanced economies have remained large. More recently, the story of misallocation (inefficiencies in the use of technologies) has become relatively more important than undercapitalization (low capital stock) in driving these productivity differences. These inefficiencies in resource allocation across agricultural farms and manufacturing firms in Sub-Saharan Africa are linked to human capital misallocation. Policies and institutions distort the allocation of talent by delivering inefficient occupational choices (which either leads to more informality of a slower structural transformation process) and affecting producers’ decisions to invest in new technologies or methods of production as well as their decisions to enter or exit the industry.