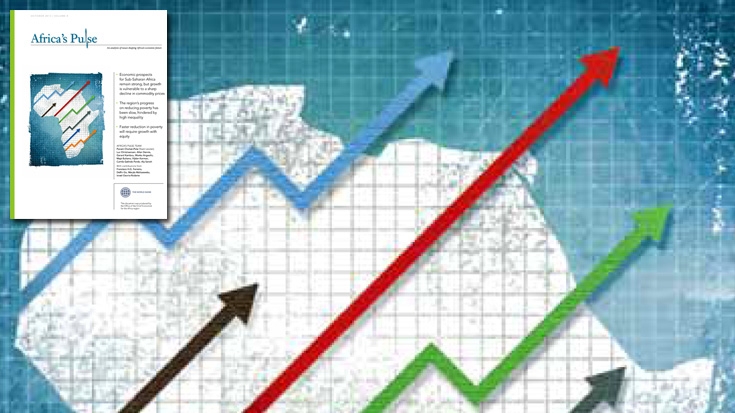 WASHINGTON, October 7, 2013— Five years after the start of the global financial crisis, most countries in Sub-Saharan Africa have continued to register relatively vigorous growth. Economic activity throughout the region continues to expand: GDP growth is projected to reach 4.9% in 2013, compared with 4.2% in 2012, and will rise to 5.5% in 2015, according to the World Bank’s new Africa’s Pulse, the twice-yearly analysis of the economic trends and latest data on the continent.

This burgeoning economic activity is supported by strong domestic demand from rising household consumption and booming production in mineral resources, agriculture, and service sectors. The expansion of commodity exports spurred by the gradual strengthening of advanced countries worldwide, remain key to the region’s growth dynamics, the report notes.

“Africa’s economies are have been expanding robustly and poverty is coming down,” says Punam Chuhan-Pole, the World Bank’s Lead Economist for Africa and co-author of Africa’s Pulse. “At the same time, the analysis shows that without programs to create inclusive growth, significant reductions in poverty will be harder to achieve, even among Africa’s faster growers,” Chuhan-Pole adds.

Across the region, governments have stepped up investment spending. Public investment in most countries in the region—for example, Ethiopia, Ghana, Namibia, Niger, Nigeria, South Africa, Tanzania, Uganda, and Zambia—continues to be geared toward the provision of basic infrastructure, such as power generation, roads and port facilities, which remain critical to improving competitiveness in the region.

Africa’s Pulse shows that poverty in Sub-Saharan Africa has also declined. An estimated 58 percent of people in the region were living on less than US$1.25-day around the turn of the millennium. By 2010, the poverty headcount ratio declined by almost 10 percentage points to an estimated 48.5 percent.

However within this impressive economic expansion, the analysis shows some variation in economic performance across country groups. Within the “resource-rich” country group, the gap in growth between oil and nonoil countries has narrowed. At the same time, several countries within the “non-resource rich” county group have achieved sustained high growth rates for over a decade, such as Ethiopia, Mozambique and Rwanda. South Africa is one of a few countries where growth is lagging behind the levels achieved before the global crisis began.

In addition, ensuring that growth translates into considerably less poverty has been slow and hindered by high inequality.

“Africa grew faster in the last decade than most other regions, but the impact on poverty is much less than we would’ve liked. Africa’s growth has not been as powerful in reducing poverty as it could have been because of the high levels of inequality. Growth with equity is possible, but it requires a decline in inequality in both outcomes and opportunities,” says Francisco Ferreira, Acting Chief Economist, World Bank Africa Region.

With some exceptions, domestic prices of staples (maize, miller and sorghum) across the region rose only slightly and remained well below price levels from last year. In some parts of the region, such as in parts of Southern Africa, droughts tightened maize supplies leading to higher prices. In Mozambique, for example, maize prices increased by over 9% in Maputo. Meanwhile in Mali, Burkina Faso and Niger, improved security and favorable harvests resulted in lower prices of sorghum and millet.

Internally, natural disasters, both old (droughts), but also new (floods), are occurring with increasing frequency, and continue to dampen crop productivity, the report notes. The agricultural sector still plays a dominant role in most African economies, and families spend significant amounts from their household budgets on food. For these reasons countries will need to take steps to increase the resiliency of agriculture and protect it from unfavorable climate change impacts, according to the analysis.

At the same time, the threat of conflict continues, as demonstrated by the events over the last 18 months in the Central African Republic, Kenya, and Mali. Building resiliency to this type of volatility is as critical to sustaining economic growth and reducing poverty as measures that help to speed economic expansion, the report adds.

Looking Into the Future

With the region’s impressive economic performance during this period of global insecurity, Africa’s Pulse asks the question: If there are further adverse shocks to the global economy, will economic growth persist in Sub-Saharan Africa, and what impact will it have on poverty reduction? Two separate scenarios simulating global oil and metal price shocks show that among developing regions, Sub-Saharan Africa would experience the most impact.

The report recommends that countries could avoid the negative trade effects from global price changes if the appropriate policies and steps that promote economic diversification are put in place.

Inspired by the recent achievement of poverty reduction across the developing world, and Africa’s dramatic turnaround after many years of decline, the international community and the World Bank have agreed to find ways to reduce the global US$1.25-a-day poverty headcount ratio to 3% by 2030. With this in mind, Africa’s Pulse asks a second question: What are the ramifications of the global “3 percent by 2030” target for Africa’s poverty status now and in 2030?

The analysis presents three scenarios for growth across the region through 2030, and all three illustrate the challenge of accelerating the reduction of poverty in Africa. Despite the continent’s growth and its progress in the fight against poverty, the world’s poor will increasingly be concentrated in Africa, according to the analysis. This change will move the continent even more to the center stage in the global fight against poverty, the report adds.

With this in mind, the report concludes that Africa’s poverty reduction must be accelerated, not delayed. Economic expansion and growth alone will not suffice to rapidly reduce poverty in the region, it concludes.