Harnessing Urbanization to End Poverty and Boost Prosperity in Africa 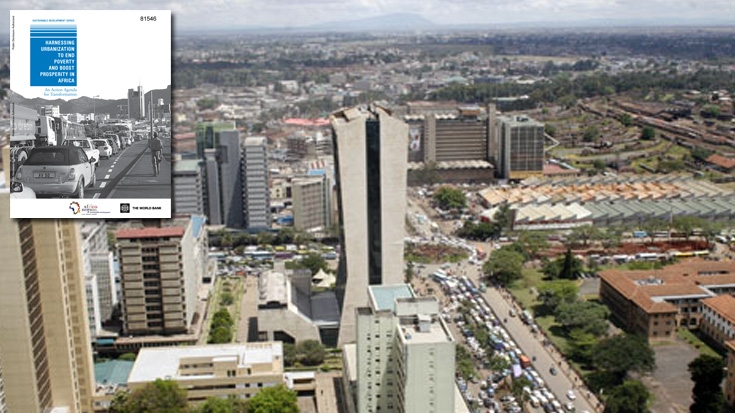 WASHINGTON, October 23, 2013 – Africa is witnessing an unprecedented projected population growth of more than 40,000 new urban inhabitants per day between now and 2040. Investing in cities is central to securing the next stage of Africa’s development says a new World Bank report, “Harnessing Urbanization to End Poverty and Boost Prosperity in Africa.” Cities are engines of economic growth, already accounting for more than two-thirds of the economic output in most developed countries and the trend in Africa is similar. Cities also enable cost effective delivery of crucial services to the poor, with potential to reap major economies of scale and scope in both their “lived” and “worked” environments.

However, the report cautions that most African cities do not have sufficient policy coordination, suffer from inefficient planning and lack adequate infrastructure and services to realize the potential gains of urbanization – but notes that there is still time to get urbanization processes right.

"With over 450 million new urban dwellers expected between 2010 and 2040, Africa's surging urbanization demands vastly improved delivery of services," said Jamal Saghir, World Bank director for Sustainable Development in the Africa Region. "This study shows that more urbanized countries have achieved lower poverty rates as well as higher gross domestic product per capita. We want to draw policymakers' attention to the fact that countries having more than 60% of their population in urban areas are expected to achieve 50% more Millennium Development Goals on average than those with urbanization rates of 40% or less. The pathway to end poverty and boost shared prosperity will necessarily go through Africa's cities."

The report highlights the importance of building efficient, inclusive and sustainable cities to harness the potential of urbanization. It emphasizes that investment in making cities efficient is likely to provide the highest returns in the face of an uncertain and fast-changing economy, but cautions that efficiency enhancements go hand in hand with strengthening inclusion to ensure the poor are not left behind. In addition, it urges that the negative external social and environmental costs that come with ill-managed urbanization must be avoided.

To realize this vision for the continent’s urban future, Africa’s policymakers and urban managers will need to develop clear priorities involving policy and regulatory commitments for long-term integrated development, scaling up infrastructure investments, basic services and the urban environment, as well as building sound institutions and financial systems at all levels to enable effective implementation. The good news is that Africa’s urbanization is yet to happen, and there is still time to get it right. With Africa less than halfway through the urbanization process, countries still have time to get “ahead of the urbanization curve” and maximize its benefits.

Alex Bakalian, World Bank sector manager for Urban Development and Services in Western and Central Africa, said “our report points to the need to overcome the challenges of insufficient coordination, management, financing and planning of Africa’s cities so that efficient, inclusive and sustainable development can be a reality in Africa’s urban sector.”

The World Bank Group (WBG) can assist Africa to harness the potential gains of urbanization, with customized solutions specific to each country and city’s needs. This support involves three complimentary instruments;

These instruments are applied in various spatial contexts focusing on: burgeoning metropolitan areas and large cities; secondary and tertiary cities; and within these cities, on the delivery of basic services in informal and unplanned areas. In the process, WBG cultivates partnerships with international development partners, bilateral, non-governmental organizations, regional associations and research institutions to harmonize solutions for urban development.