The Stallings classroom observation system, also known as the Stallings classroom snapshot, is a questionnaire and protocol for timed observations that produce quantitative data about interactions of teachers and students in classrooms. It was developed in the 1970s by Stanford professor Jane Stallings to observe basic education classrooms in the United States. Its advantages are that it requires only basic training to administer, and produces data with a high degree of reliability between raters. Since the instrument focuses on observable elements of teachers’ interaction with students in the classroom, it can be used in any school setting, whatever the grade or subject being taught, language of instruction, or complexity of the curriculum.  Stallings data is comparable internationally, and it has been validated in a number of developing countries.

How does it work?

The strength of the Stallings method is that it converts the qualitative activities and interactions between a teacher and students during a class into robust quantitative data on teachers’ instructional practice and students’ engagement.  Ten different observations are made in every class, at evenly spaced intervals.  The intervals depend on the length of the class; every three minutes in a 30-minute class, every five minutes in a 50-minute class, etc.  Each observation consists of a 15-second scan of the classroom, starting with the teacher, and including a headcount of the students who are visibly not engaged with the teacher at that moment. All Stallings variables are expressed as a share of official class time.  Therefore, observers must be present in the classroom before the first official moment of class and stay through the official end time of the class, whether the teacher is present or not.

What does it measure?

Example 1: Average time on instruction in Latin America and the Caribbean (2011-2013) 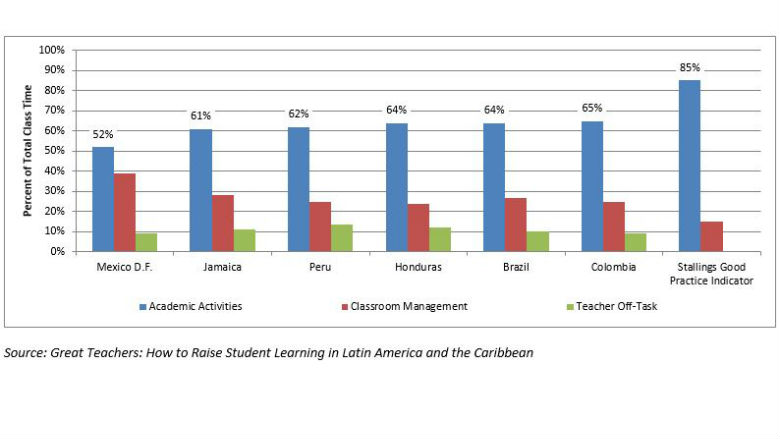 Example 2: Teachers’ ability to keep students engaged in Latin America and the Caribbean 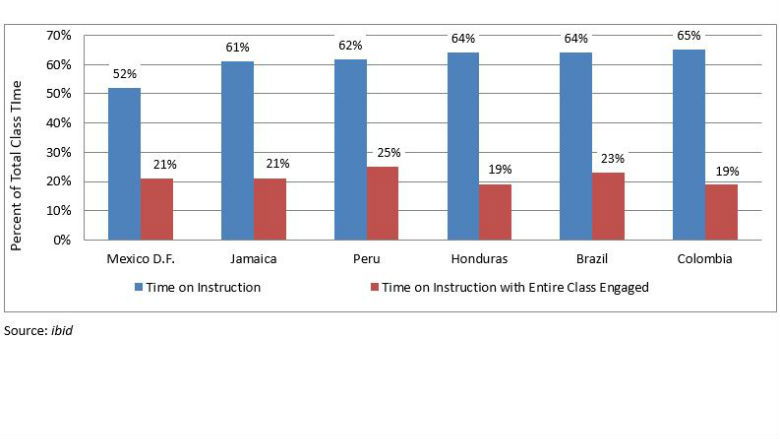 How much does it cost?

The major cost of Stallings observations – like most field research – is the logistics of transport to schools.  Under the recommended protocol, a trained observer spends a full day in each school, to observe the maximum number of different teachers – typically five or six classrooms per school. Advantages of the Stallings method are a free, open-source software that can run on any android device and be downloaded from the SIEF site, and that it is currently available in English, French, Spanish and Portuguese.  Given its increasing use in developing country settings, a growing body of cross-country data exist for benchmarking. Under the recommended protocol for Stallings on tablet, observers are trained for 2.5 days, with approximately half of this time spent doing practice observations in schools.  If the paper grid version of Stallings is used, observers usually require five days of training to achieve high (over 70%) rates of consistency.  In the Latin America region, observations have been carried out by school system supervisors, to reduce costs. Education officials trained in to carry out Stallings observations typically rate the experience as relevant and valuable for their daily work.

No Android-based device? Get a paper copy of the Stallings instrument