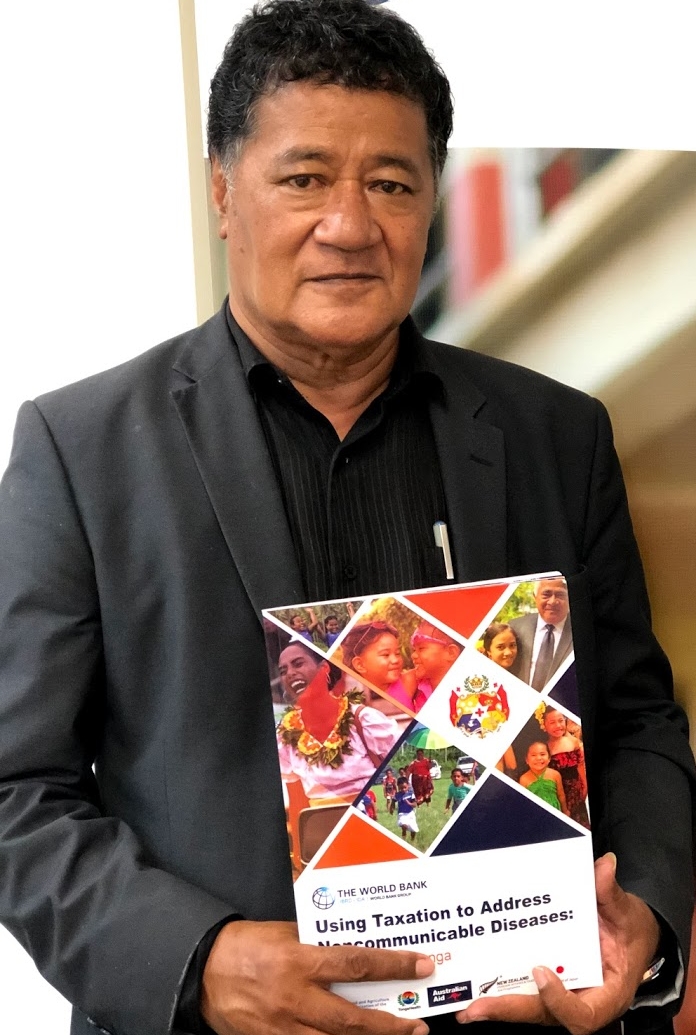 Rev. Polota, holding a copy of the World Bank study on using taxation to address NCDs, talks about how tobacco tax helped him quit smoking after 48 years.

Risky behaviors such as smoking, poor diet, harmful alcohol consumption, and physical inactivity are acknowledged as the major contributing factors to the increase of non-communicable diseases (NCDs) all over the world. But for Reverend Viliami Polota, smoking was the vice that was damaging his health. In Tonga, almost one in two men, and an increasing number of young women, smoke. The reverend was one of them for most of his life until the government used tax to hike up tobacco prices.

In response to rising NCD rates, the Tongan government has gradually introduced . This is also aligned with the WHO Framework Convention on Tobacco Control. While excise taxes on tobacco had been increased gradually over the years, the government of Tonga, in July 2016, decided to “go big and go fast” by increasing taxes on imported cigarettes by nearly 50%—to TOP 380 (ca. USD 165)/1000 sticks, compared with TOP 255 (ca. USD 110)/1000 sticks in the previous year, leading to significant price increase. Prices of locally produced cigarettes have also risen, though not as much because of lower excise tax increases applied to them. The World Bank has supported the government of Tonga in evaluating the impacts of the policy. According to the household survey conducted by the World Bank, the large tobacco excise tax increase in July 2016 led 18.4 % of smokers to decrease their cigarette consumption, which was significant.

To give human perspectives to the data, the World Bank team also conducted in-depth interviews with community members to understand various perspectives of the policy impacts on communities that could not be captured through quantitative surveys. Here, we share the personal experience of Rev. Polota, whose life and behaviors have been deeply affected by the July 2016 increase in tobacco tax policy.

Rev. Polota started smoking when he was only 13 years old, smoking all through high school along with his peers. It wasn’t until he was an adult in the mid-1970’s that he realized his smoking was no longer a choice, but an addiction he could not give up. He experienced health problems due to his smoking suffering from bronchitis and breathing difficulty. Even so, his addiction held fast, failing to quit after countless attempts.

"Now that I have quit (smoking)...I can save money. I can afford to buy fish and healthy foods for my family."
Rev. Viliami Polota

From the very beginning, Rev. Polota understood the financial impacts his smoking was causing not only to himself but to his family. However, up until early 2016, tobacco was still reasonably affordable, with gradual increase in prices. However, the large tobacco tax rise in July 2016 would change his life forever.

“I can still recall the Ministry of Finance pushing for a big jump in tobacco taxes in 2016. After that big increase in the taxes, tobacco became very expensive, price of cigarettes rose from TOP$10 to TOP$15 per packet. My income was low, I resigned from the government in 1999 and worked for the Church, so the income was low,” Rev. Polota says.

He was smoking 1-2 packets a day, relying on money his children would send back from their jobs in New Zealand to him and his wife. The financial burden of the increase in cigarette price was so bad that he had to take money from his wife to buy cigarettes, without her knowledge, impacting the financial situation of his family, Rev. Polota recalls.

Soon after that, it was clear that the financial impacts of smoking were too much for his family, and Rev. Polota decided that he had no choice but to quit smoking. This time, he was successful.

“Now that I have quit, I could buy fish every weekend,” he says. “I can save money. I can afford to buy fish and healthy foods for my family.”

Rev. Polota has not only seen his financial situation improve, but he feels healthier. He can breathe better and is keeping himself physically fit and healthy.

The path for Rev. Polota from 1-2 packets a day smoker to quitting was not easy and it shows the importance of not underestimating the power of addiction. But he did quit smoking in 2017 after 48 years due to the increasing financial burden alongside the health consequences of tobacco. While there are other policies and factors that influence people to reduce or quit smoking, , and helps reduce the wide-reaching damaging impacts of tobacco on individuals, their families and the community as a whole.