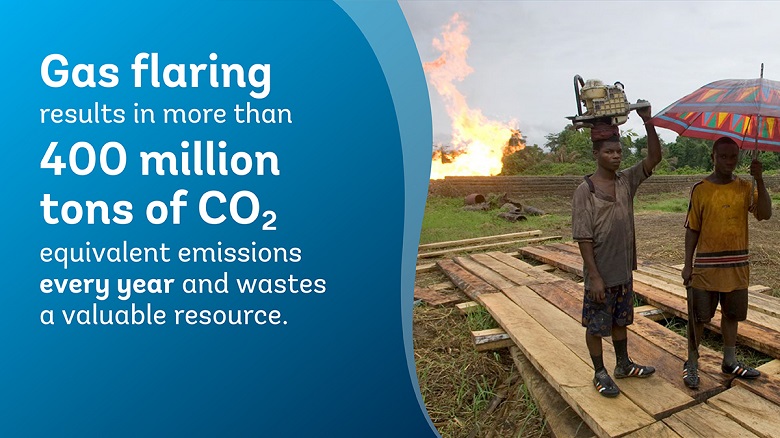 Thousands of gas flares at oil production sites around the globe burn approximately 150 billion cubic meters of natural gas annually – equivalent to the total annual gas consumption of Sub-Saharan Africa. The flaring of so-called “associated gas,” a by-product of oil production, releases a range of pollutants into the atmosphere, including carbon dioxide and methane. Over 20 years, methane is 80 times more powerful than carbon dioxide. Indeed, according to the European Commission (EC), methane has a “significant effect on the climate and contributes to tropospheric ozone formation, a potent local air pollutant which itself causes serious health problems.”

Although the European Union accounts for only 0.17% of global routine gas flaring (as of 2019), it nonetheless recognizes that the practice contributes significantly to global methane emissions. The EC’s new “strategy to reduce methane emissions” says it will consider regulation to end routine flaring and venting and pledges its support for the World Bank’s Zero Routine Flaring by 2030 initiative, developed to end routine flaring globally no later than 2030. Currently 88 governments, oil companies and development institutions have committed to this initiative and goal. The EC will also work with the World Bank’s Global Gas Flaring Reduction Partnership (GGFR), a dedicated Trust Fund made up of governments, oil companies, and multilateral organizations working to end routine gas flaring at oil production sites around the world.

“The Commission will examine the options available in view of proposing legislation on eliminating routine venting and flaring in the energy sector covering the full supply chain, up to the point of production. This would complement the 2030 objectives of the World Bank’s Zero Routine Flaring initiative, which the Commission intends to support alongside its support for the World Bank’s Global Gas Flaring Reduction Partnership. The Commission will also make it a priority to explore a more precise standard for flaring efficiency, with the objective of further reducing both fugitive emissions and emissions from incomplete combustion of fuels. These mitigation options are generally cost-effective, and a key component of methane-emission mitigation in the energy sector, with combustion accounting for a significant portion of EU emissions.”

The World Bank looks forward to continuing to work with a range of partners, including the EC, to end routine flaring by 2030, contributing to the fight against climate change and delivering on countries’ national plans to dramatically reduce their emissions.