Women, Agriculture and Work in Africa 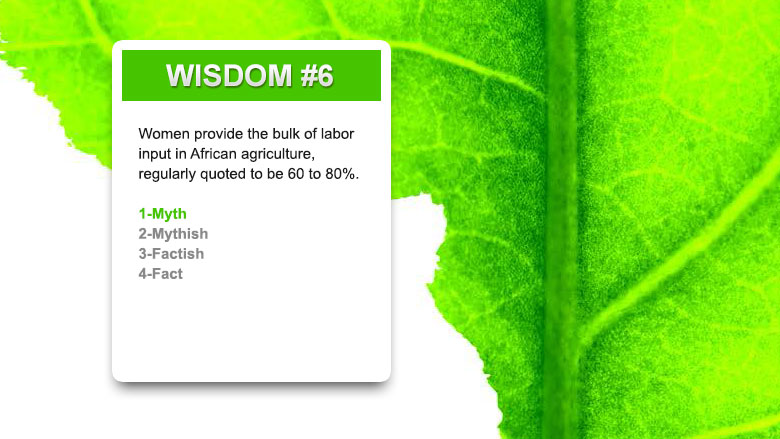 COMMON WISDOM #6: Women provide the bulk of labor input in African agriculture, regularly quoted to be 60 to 80%.

Two messages emerge. First, the findings question prevailing assertions that increasing female agricultural productivity would yield substantial gains in aggregate crop output. Nonetheless, this should not be taken to mean, that investment in female labor productivity in agriculture cannot be a high return activity to reach other objectives, such as female empowerment or improved nutritional outcomes of children. Establishing this requires further research. Second, nationally representative household surveys remain key to inform policy making, including to get the stylized facts right.

Women’s large overrepresentation in agricultural tasks, combined with the existence of a gender gap in agricultural productivity and the need to boost Africa’s agricultural output is motivating increased attention to raising female agricultural productivity. Yet can it really be true that women’s labor share in African agriculture amounts to 60-80%, as is regularly mentioned in policy circles? Women make up only about 50% of the population and are already tasked with a host of other domestic duties. If women do 60-80% of the work in agriculture, what would the men be doing, especially given that in rural Africa agriculture is still the primary economic activity for most men?

Second, good data on labor input in agriculture are hard to come by, let alone good labor input data disaggregated by gender. It does not surprise then that the 60-80%  labor share figure can in fact only be traced back to an undocumented quote in a 1972 United Nations report holding that: ‘Few persons would argue against the estimate that women are responsible for 60-80 [percent] of the agricultural labor supplied on the continent of Africa.’ (United Nations Economic Commission for Africa, 1972, p. 359). So, what is the labor contribution of women to agriculture in Africa?

Potential sensitivity of the findings to the gender and knowledge profile of the respondent is further analyzed. Male or less knowledgeable respondents may for example over- or underestimate contributions by female household members and vice-versa.

The results of the study are as follows:

Figure:  Female labor input in crop production is well below 60% across countries 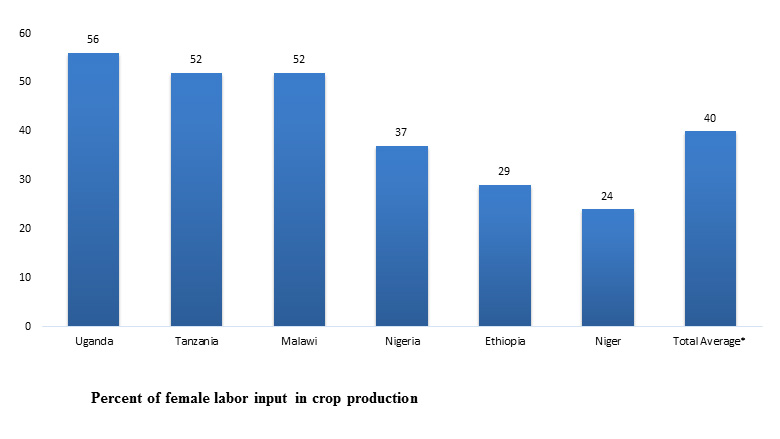 First, the policy priority for females in agriculture is not so clear-cut. The lower than expected female labor shares (well below 50% in some countries) do not, as such, support universally disproportionate attention to female farmers to boost crop production.  That said, investing in female agricultural productivity may well be a high return activity to reach other objectives such as increasing female empowerment. Yet this requires further study.

Second, despite the power and popularity of randomized control trial, the findings underscore the continuing importance of nationally representative household surveys including to query common wisdom and put the policy debate on solid empirical footing.