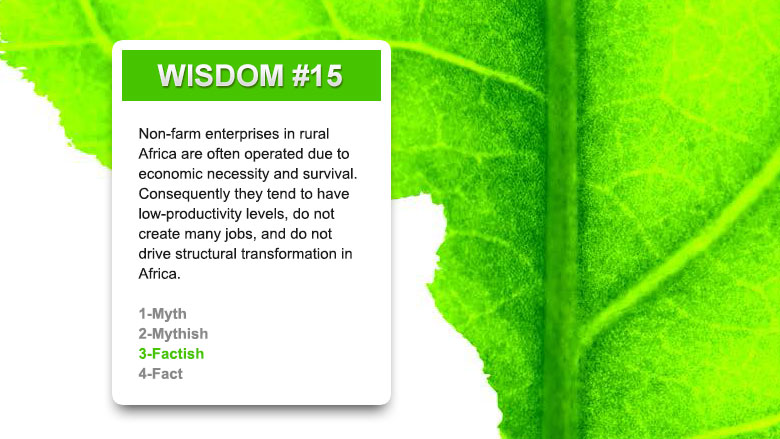 COMMON WISDOM #15: Non-farm enterprises in rural Africa are often operated due to economic necessity and survival. Consequently they tend to have low-productivity levels, do not create many jobs, and do not drive structural transformation in Africa.

The study generally confirms the common perception that Africa’s rural household enterprises operate largely in survival mode, although a small portion of them are highly productive.

The paper suggests policies that improve the business environment, that assist households in rural areas to manage and cope with risk, and that strengthen the capabilities of individuals to be entrepreneurial. It also recommends improvements in data collection on rural enterprises.

African rural nonfarm household enterprises are commonly perceived as operating largely in survival mode, but little is known about the truth of this perception and the economic roles of such enterprises. Such knowledge is needed because informal household enterprises in rural Africa may have to absorb large parts of the estimated 65 million new labor market entrants by 2020. This paper describes these enterprises, investigates household motives to operate them, analyzes their productivity, and assesses their continuity over time.

Several factors are associated with households starting a nonfarm enterprise as well as with the type of business operated:

A link exists between motivation to operate a nonfarm enterprise and the subsequent productivity of that enterprise:

Although starting an informal enterprise in rural Africa is relatively uncomplicated, raising its productivity so that it can grow and survive is challenging:

Not all enterprises operate every month of the year

The findings suggest policies should support enterprise owners through education and training, access to credit for business expansion, or possibly development of clusters. Microinsurance schemes and social protection policies are needed to protect households from negative external events—especially those with enterprises headed by younger owners. Policies that both support entrepreneurs and cushion them from external events will have a stronger effect on enterprise creation and productivity, thereby contributing to higher survival rates and job creation.