Is African Agriculture Intensifying? The Status in Six African Countries 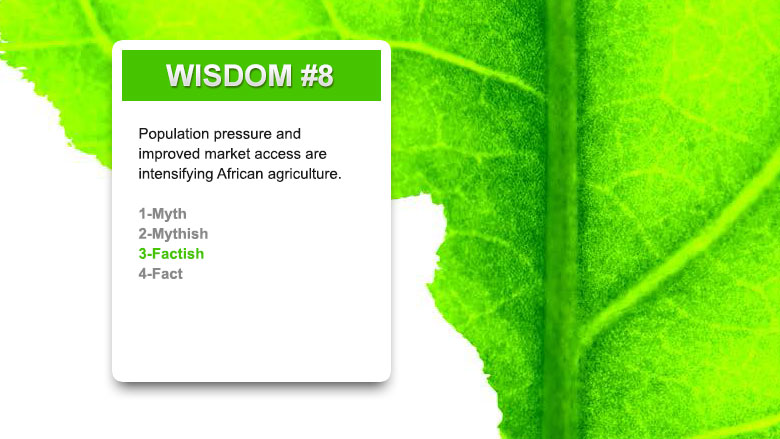 In response to rising populations, market opportunities from urbanization, better market and cropping intensities have increased, but of inputs, technology, and investment lower than expected. In the six countries studied, cropping intensification, which provides opportunities for optimizing crop production, appears to have induced less use of inputs and less investment than projected.

The Boserup-Ruthenberg (BR) theory (Boserup 1965; Ruthenberg 1980), which has long been used to explain determinants of agricultural growth, holds that both population growth and market access can lead to a virtuous cycle of the higher use of organic fertilizers, and investments in mechanization, land development, and irrigation. This cycle can offset the negative impact of population growth on farm sizes, maintain or increase per capita food production, and increase farmers’ incomes. An extensive body of evidence tests the BR hypothesis in Africa and often confirms it.

In the past two decades, rapid population growth has stressed African farming systems while a sharp increase in urbanization and economic growth has provided new market opportunities for farmers. This paper investigates whether these changes have resulted in rapid intensification of farming systems, permitting rapid agricultural growth and increased incomes for farmers.

Using the first round of data from the Living Standards Measurement Study–Integrated Surveys on Agriculture, researchers took a comprehensive, internationally comparable measure of the agro-ecological potential using the modeling of estimated attainable crop yields across all agricultural areas worldwide. In addition, as a proxy for urban demand, researchers also took a measure of urban gravity that a location experiences with respect to all urban centers in the country with current population exceeding 500,000.

The analysis shows that patterns of intensification observed across countries are not entirely consistent with the BR theory. Given the rise in population, improvements in infrastructure, and growing urban demand, land use intensity has reached the stage where land is cropped every year (permanent cropping) in all six countries. As the BR framework predicts, fallow areas have virtually disappeared. But cropping intensities, involving the use of organic and chemical fertilizer and irrigation, are much lower than expected. Cropping intensity (see figure) is highest in Uganda because of its bimodal rainy season and lowest in Malawi and Tanzania. Although it is greater than one in all six countries, indicating they have reached the stage of permanent cropping, it could have been higher given the population density and increased market access—especially in Malawi, where agro-ecological population pressure is already high and, contrary to the BR model, land use intensity is low.

As other studies note, organic and chemical fertilizer use, though improved in Ethiopia, Malawi, and Nigeria, is too low to maintain soil fertility. Investments in irrigation also fall far short of what the high population pressures imply (partly explaining the lower cropping intensities). Across the six countries, average area irrigated per farm is only 0.03 ha, and just 4.4% of the total area is irrigated. Inconsistent with the BR model, irrigated area is highest in Tanzania (0.45 ha), where land pressure is lowest, and lowest in Malawi (0.03 ha), where land pressure is highest. Warm arid areas have the largest mean irrigated area per farm. Warm semiarid areas come next, followed by cool semiarid and warm sub-humid areas.

Cropping intensity is the gross cropped area per year divided by the cropped area and reflects the number of times the area is used for crop cultivation per year.

Intensification in many African countries appears to be far less beneficial to farmers than expected, perhaps in part because of the poor policies and public agricultural development expenditures prevailing during the 1970s and 1980s. International prices remained extremely low up to 2006. Institutions, public investment, and private investment take time to respond, leaving hope for accelerating response in the future. Long-running panel data and several intensification variables are needed to test the BR framework further and to discover whether agricultural involution is occurring in parts of Africa.