Remarks by Linda Van Gelder at the Kopaonik Business Forum 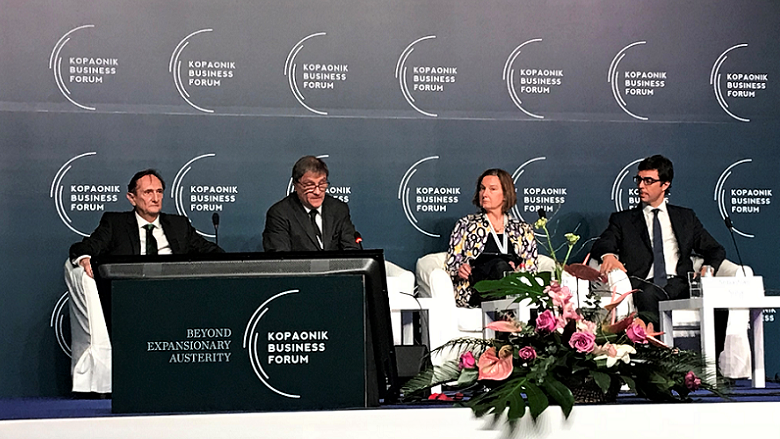 Thank you for asking me to reflect on Serbia’s structural transformation agenda and the next chapter. Let me start by congratulating the government for its successful structural reforms, many underpinned by support from the IMF and the World Bank, but all driven to implementation by its own commitment.

I’d like to make three points. First, reforms of the last decade, and especially the last three years, have been fundamental to help Serbia recover its economic prospects. The primary challenge now is to sustain these reforms.

Second, while success has been impressive, Serbia can do more. It is urgent to complete first-generation reforms, many of which have taken far too long.

Third, complementary reforms can support completing the transformation of Serbia to a competitive economy, with an accelerated path to high-income.

Serbia made bold reforms in recent years – helping to create the foundation for growth and development. It opened EU accession talks in early 2014. A three-year IMF program was successfully completed last month (February 2018).

Reform of the railways company started in 2015 and has restructured it into specialized divisions focusing on passenger transport, cargo transport and infrastructure management.  Unprofitable lines were reduced; qualifications of employees improved; and the rolling stock was renewed. The result was fiscal savings of about 30 million dollars a year.  Even bigger savings should materialize over the next few years.

New labor legislation encouraged the formalization of jobs, bringing people out of the shadow economy and providing businesses with more flexible forms of employment.  Some 125,000 employees registered with social insurance funds since 2014.

The status of some SOEs has been resolved. Over 500 socially owned enterprises, which mostly existed only on paper, were dissolved. Some enterprises in “restructuring status” were resolved, such as the sale of the pharmaceuticals producer Galenika.  Others are on more solid financial footing, for example, EPS and, slowly, Srbijagas.

Recently signed major PPP agreements (such as the airport and solid waste facility in Belgrade) may signal the start of the new era in infrastructure upgrading and management. These kinds of deals are the frontier for the new economy – a sign of growing confidence in Serbia as a business destination.

And reform of the public administration, although a work in progress, has a sound, comprehensive design. Interim results are impressive, already brings budgetary savings of over 400 million euros a year from lower wage bill spending.

These reforms provided a solid foundation for economic recovery and stabilization. Most importantly, the large fiscal deficit of more than 6percent of GDP was turned into a surplus of around 1.1 percent of GDP in 2017. The challenge now is to ensure these are sustained.

Yet, many reforms are incomplete due to slow progress.

But, to my second point, many reforms remain incomplete. For Example: the state footprint in the economy remains massive, 17 years since the start of reforms. In the financial sector, which affects all others, one of the five largest banks and insurance company are still in state hands.

An absolute priority is to complete the privatization of state owned enterprises and state-owned financial institutions. Many governments across the world have a poor record managing commercial enterprises and financial institutions; Serbia is no different. In the recent past, Serbia spent from the budget more than 1.5 billion euros to rescue failed banks. Instead, this amount could have been used to build all the missing highways.

Slow reform is expensive. There is a visible cost: Inefficient SOEs cost the budget millions rather than producing revenue. There is an opportunity cost: in past six years, subsidies averaged 3.3 percent of GDP – more than capital expenditures which only averaged 2.8 percent.

And there is the cost of crowding out – when the presence of SOEs excludes competitors that could revolutionize industry and productivity. Considering the benefits that Serbia has reaped when bold and timely reforms have been completed, there is much to be gained in a faster and more comprehensive completion of remaining reforms.

So, what is the way forward?

Slovakia’s experience is instructive. Between 1990 and 2000, it had a path similar to Serbia’s current path (slow reforms; slow growth; high unemployment) but then Slovakia seized the opportunity, embraced reforms with gusto and entered the EU. Now it is one of the fastest growing economy in the EU and has entered the eurozone.

Serbia is at the gate of prosperity. To cross the threshold and really seize the opportunity to “grow like a rocket”, as President Vucic has described, Serbia needs to reinvent its economy. Economic growth cannot come by reliance on relics from communism. RTB Bor; PKB agro-combinate; Azotara and some 600+ other enterprises in which the state holds significant control will not create new, innovative and internationally competitive products that can push Serbia’s growth.

Serbia needs new, dynamic and innovative businesses based on local knowledge and cutting-edge technologies. Serbia needs an environment for such businesses to be born and thrive while coping with challenges posed by digitalization. To help businesses in this endeavor, the government should accelerate the resolution of state enterprises, massively improve the business environment, including via tax reform; create an ecology supportive of innovation in digital and non-digital sectors; enable the upgrading of labor skills needed for the digital age.

A concluding observation: the EU accession path can be an enabler to break with the past. This is a once-in-a-generation opportunity. There are few instances where the path to success already provides substantial benefits even before arriving at the destination. The substance of the reforms on the path to EU accession are good for Serbia whether it is in or outside the EU.

Whatever this next chapter to transform Serbia’a economy, it will require a break from the past, bold choices, and urgent action. As we have in the past, the World Bank looks forward to being a partner on this road ahead.