The Central African Republic: "Land of Wealth and Opportunity"

On March 30, Catherine Samba-Panza, the interim President of the Central African Republic and one of three female heads of state in Africa, handed over power to President-elect Faustin-Archange Touadéra. During her two years as leader of the transition, she was faced with the difficult task of bringing an end to months of sectarian violence that left her country in tatters. In an exclusive interview, she shares her hopes for the future.

Could you review for us what has happened during your two years as leader of the transition?

Gains have been made in a number of areas. In the area of security, when I took over as the leader of the transition in January 2014, our security system was inadequate and violence was widespread. There were armed groups throughout the country and huge human and humanitarian rights violations. We were able to begin stabilizing the country with the support of international forces, including United Nations troops.

In the humanitarian area, when my administration took office, 50 percent of the population were either refugees or living in camps for displaced persons. We were able to help them to leave the camps, and as a result the number of displaced persons has dropped significantly. And the refugees, who have been living in camps in neighboring countries, have begun to feel safer and have slowly started to return.

The other important issue is political dialogue. You know, the issue that led us into conflict was essentially a political one: it was a fight for power, the pursuit of power. We realized that it was necessary to engage in dialogue with all those who were fighting for power so that we could come together and put the overall interests of the nation before the pursuit of power driven by personal interests.

There has also been a renewal of the administration. We had a State that was totally lacking in structure, and we needed to rebuild the administrative apparatus in order to restore State authority. We have accomplished this, but so far only in Bangui. We would have liked to restore State authority throughout the country, and we are gradually getting there with the support of our technical and financial partners, who are helping us little by little to rebuild public administration in the country.

In broad strokes, that is what has happened, without getting into the economic situation. Companies’ production tools were completely destroyed, so there have been employment issues. Through efforts in the areas of governance, management, and improvement of the business environment, we’ve been able to regenerate some economic activity.

In your opinion, what are the biggest challenges facing the Central African Republic today?

The situation has calmed down in Bangui and in some other places around the country, but this calm… the country is fragile and peace must be consolidated by addressing a number of important issues relating to security sector reform. It is very important to really focus on this issue because security is a general matter; it doesn’t have to do only with the military. We must also be concerned with civilian security.

We must disarm and demobilize all armed groups who are still in possession of weapons and are using them against the population or using them simply to survive because they have no other opportunities. So it is important to design rehabilitation programs to enable these armed groups, these armed youths, and also civilian populations who still have small- and large-caliber weapons, to lay down their arms, but we have to do so by offering them opportunities to rebuild and to get back on their feet by earning an income and rejoining the community. And I think the World Bank is ready to support us in these efforts. We have priority sectors where we can use, employ, young people and women, especially the agricultural sector. We are a country with at least 15,000 hectares of arable land, with good rainfall levels, where everything grows! We can place special emphasis on agriculture, starting with subsistence farming to prevent nutritional and food shortage problems. We can start with that type of farming and then work towards commercial farming that will enable people to earn income.

In September 2015, when we organized this forum on promoting the private sector, there was a great deal of enthusiasm, not only among potential Central African investors but also among foreign investors, who had discovered that there were so many opportunities for action in the Central African Republic, a land of wealth, a land of opportunity. Many have wanted to come back and have made commitments. Because during this forum, we focused on improving the business sector but also on rekindling the interest of investors in relatively unknown sectors, growth sectors that exist. We talked about agriculture, mining, energy, transport, timber. We have a whole array of sectors where potential investors could come and create jobs.

It is important to use economic recovery to combat poverty—of that we are convinced. We believe it is also important to focus on recovery in order to reduce unemployment among young people and women and also to enable sustainable development of the Central African Republic. And we feel reassured because during our discussions with top officials of the World Bank (I have just met with the Bank’s Managing Director), I have sensed a willingness, a real desire to continue to support us unreservedly, and I would like to take the opportunity provided by this interview to express my gratitude to the World Bank Group.

Can you talk about the role of women in the peacebuilding process?

If you look carefully at conflicts in general, in any country, you will see that it is men and boys who are involved in the conflict. And when the antagonism reaches a certain level, in order to be able to deal effectively with all sides, what is needed is a leader who is above the fray, a leader who is respected. In our African cultures, women are accorded a certain respect. In our cultures, when there is a conflict, when there is war, and a woman comes forward holding an olive branch in her hand, she is respected and, in principle, the hostilities should cease immediately.

I understood that as a woman, and as a mother, I might be in a position to call for a cessation of the hostilities, for reconciliation, and for Central Africans, both men and women, to lay down their arms and try to enter into a dialogue, to wipe the slate clean and start afresh. I admit that it has been difficult because I was faced with armed groups of men and policies made by men whose agenda was to conquer, to take power, and they, in turn, were confronted by a woman who wanted to teach them lessons. It has not been easy.

Women now play an important role in conflicts. When there are conflicts, men kill each other. It is young men who die in conflicts. And who then becomes the head of the household? Women do. Who then becomes responsible for ensuring the community's survival? Women do. So women start informal businesses, they take up farming, they do whatever it takes to provide for their families.

But these women are often also the victims of conflict. They often suffer sexual abuse, rape, and other forms of violence. So they need psychological, medical, and legal support. They need redress for the harm they have suffered.

What advice would you give young women who want to become involved in politics? 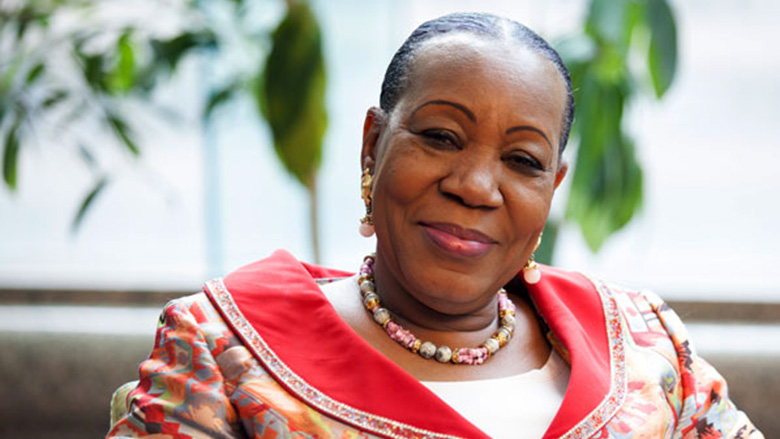