This report is probably one of the most covered and discussed report of the World Bank. And rightly so: this report discusses the country’s regulations that have important bearing on the country’s capacity to generate economic activities, jobs, and reduce poverty.

Having been in the country for more than four years now, I tend to look at these rankings from a broader perspective. So please allow me to digress for a moment.

The government’s focus on improving revenues and public finance led to large increases in the budget, particularly on programs which benefit the poor directly. The budget for education, health, and social protection grew by almost three times between 2010 and 2016.

As a result, the country today has a well-targeted social safety net program – Pantawid Pamilya – that promotes investments in the health and education of children while providing immediate financial support to poor and vulnerable families. The public education system now provides 13 years of free schooling. Universal healthcare coverage is close to being achieved.

Policymakers have also addressed decades-long constraints that have held back the potential of the private sector. These include the passage of an overarching competition policy law, the entry of foreign transshipment of goods, and the full liberalization of the banking industry.

These initial reforms are beginning to translate into more and better job creation and faster poverty reduction. Before the onset of El Niño, job creation surpassed 1 million and poverty has begun a downward trend.

All these reforms signal a break from the past. Institutionalizing them and laying out a reform agenda to address the remaining structural issues that impede investment could pave the way for the creation of more and better jobs.

Let me mention briefly some of these reform issues:

That’s why today’s presentation of the latest results of Doing Business is important. In a while, Robby will present some of the key results. What I’m trying to highlight here is that the country now is in a strong reform momentum. Simplifying business regulations even more can even speed up this push towards greater inclusion.

The Philippine achievements in the Doing Business program since 2010, when we moved from 144th place to our current ranking, has shifted the goal posts and put us in the same league as the more reform-oriented countries.

We acknowledge the efforts of the Philippine government, especially the National Competiveness Council, in leading the reform process. For instance, through NCC’s efforts, the government has helped streamline the business registration and payment requirements for different agencies, such as the Securities and Exchange Commission (SEC), Social Security System, PhilHealth, Pag-ibig, among others. The government is establishing a credit information system through SEC and the Credit Information Corporation.

So the country is moving in the right direction. And we are in continuous dialogue with the NCC and the Philippine government to intensify our support for the Ease of Doing Business reforms going forward.

We continue using the DB program to identify priority areas for reform. Next year’s DB report on the Philippines will expand to include a second city apart from Quezon City.

Moreover, we plan to conduct local studies to see how firms not covered by the DB methodology – such as firms in PEZA zones – are able to register, expand and operate in the Philippines. These studies will give us a deeper understanding about the business regulations in the Philippines.

Once again, thank you for coming to this briefing. 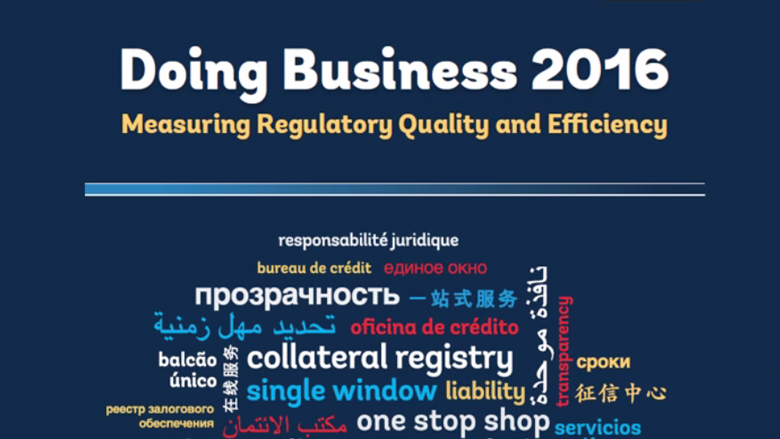