“Development for a Modern, Harmonious, and Creative Society:

It’s a great pleasure to be here today to present the “China 2030 Report.”

The idea for this study was conceived eighteen months ago, when I met with Executive Vice Premier Li Keqiang at the time of the 30th anniversary of the partnership between China and the World Bank.

We discussed how we could deepen that partnership – how we could build on the knowledge and learning, the mutual respect and friendship developed over three decades between China and the Bank.

So I’d like to thank Vice Premier Li for his unwavering commitment to this project.

I’d also like to thank Minister Xie Xuren and Minister Li Wei for hosting today’s conference, and bringing together this distinguished audience to discuss the work.

In addition, I’d like to recognize Minister Zhang Yutai for his role in starting and guiding this study.  And I’m grateful to Vice Minister Liu Shijin, who led the team at the Development Research Center of the State Council on our joint work.  His leadership throughout this project has been exemplary.

There could not be a better time to discuss China’s remarkable development story as well as the challenges China faces going forward.

Today’s international economy reflects multiple poles of growth.  Emerging markets – many in Asia – have been compensating for the stumbling performance of advanced economies.  Over the past five years, developing economies have provided two-thirds of global growth.

China is a vital part of this story.

China’s economic performance over the past thirty-two years has been exceptional: an average growth rate of 9.9 percent; over 600 million people lifted out of poverty.


China has already achieved upper middle income status.  If the country reaches $16,000 of income per person by 2030, up from today’s approximately $5,000, then China will have an economy equivalent to adding 15 of today’s South Koreas.

These developments will have profound and lasting effects on the world – economically, socially, and politically.

We should, however, be wary of straight-line trends.  As China’s leaders know, the country’s current growth model is unsustainable.

China has recognized the challenges of moving away from export- led growth and over-reliance on investment toward greater domestic demand and consumption.

China also faces challenges that are special to its circumstances:

China will chart its own unique development path toward a modern and creative high-income society – one that can overcome these challenges.

A successful China will not only continue to provide opportunities and improve lives for hundreds of millions of its citizens.


It could offer an example to other countries – developing and developed – for how economic advancement need not be at the expense of social and environmental performance, or global responsibility.

China can also seek to connect its reforms to building a stronger, more inter-connected and cooperative international economy.

I respect the Chinese leadership for asking these questions, based on their recognition of a need for structural reform.

Developed countries that are now absorbed with stabilization efforts would be wise to consider their own structural challenges to growth and innovation.

This is not the time just for muddling through.  It’s time to get ahead of events and to adapt to major changes in the world and national economies.

China’s policymakers have identified what needs to be done.  The 11th and 12th Five-Year Plans reflect the goals of change, with their focus on quality of growth, structural reforms to harness innovation and economic efficiency, and social inclusion to overcome the rural-urban divide and the income equality gap.

Now China needs to translate these plans into action – to take “what” needs to be done and turn it into “how.”

Six months ago, we met at this very same venue to discuss an early draft of the “China 2030 Report.”  At that time, Chinese and international experts provided insightful and valuable suggestions on how to improve the draft.  Minister Li Wei provided especially important guidance on how to make the report more useful to the Chinese leadership.

The joint DRC-World Bank team has worked hard to address these comments and concerns, and to improve the structure, argumentation, and application of their research and analysis.

I believe they have done an excellent job.

The result is a report that does not offer simply a textbook solution, but is based on a recognition of the political economy challenges.

The report is practical.  In accordance with Minister Li Wei’s advice, the report stops short of being overly prescriptive.  It offers directions, recognizing that these ideas need further debate within China before the details of precise policies, laws, regulations, and guidelines can be drafted and then implemented.

The report is realistic.  Reforms are not easy – they often generate pushback.  We have tried to identify obstacles to reforms, suggest sequencing and quick wins – steps that can make reforms easier to implement.  We have tried to address short-term risks, but at the same time ideas on how to make reforms participatory, building in support throughout the society as well as feedback loops based on experience.

This is also a report that can appeal to an international audience, especially other middle income countries that are in a position similar to that of China and face many of the same challenges.  For that reason, I’m especially pleased that today’s audience includes development experts from a wide range of countries, with diverse backgrounds.


Finally, this is a report that raises difficult questions.  It focuses on the central policy challenges that China, and other upper middle income countries, will need to confront:

To address these questions, the report proposes a new development strategy for China over the next two decades.

This strategy builds on China’s considerable strengths – high savings, plentiful and increasingly skilled labor, large markets, a record of solving problems to keep growth on track, and the potential for further urbanization – while capitalizing on external opportunities, including globalization, the rapid growth of other emerging economies, and promising new technologies.

The proposed reform program is based on six strategic pillars.

First, redefine the roles of the state and the private sector, so that China can complete its transition to a market economy.  Currently, China relies on a mix of market and nonmarket measures to shape incentives for producers and consumers, and there is a lack of clarity in distinguishing the roles of government, state enterprise, and the private sector.  China needs to resolve these issues.  Among specific reforms is the residency permit system – the hukou.  Priority should be given to protect farmers’ rights over agricultural land, expanding land registration, and rental rights.  The Chinese economy of the future needs to rely more on markets and the private sector.

Second, enhancing innovation and adopting an open society system with links to global R&D networks.  These improvements will need to be linked to capital and entrepreneurial markets, and supported by strong rule of law and intellectual property rights enforcement.

Third, promoting green development.  China has a significant opportunity to transform its environmental challenges into green growth as a driver of development.

Fourth, ensuring equality of opportunity and basic social protection for all.  This means facilitating equal access to jobs, finance, quality social services, and portable social security – all with stronger capacity, transparency, and accountability.

Sixth, ensuring that China, as an international stakeholder, continues its integration with global markets.  China is already a key stakeholder in the world economy – though perhaps a one that is still assessing how to combine its development needs with its international responsibilities.  Moving forward, China should be a key partner for global solutions in areas such as international development, open trade, global financial stability, open investment, energy and commodities, and the environment.

As the U.S. Trade Representative who completed China’s accession to the WTO in 2001, just over ten years ago, I was impressed by the way Jiang Zemin and Zhu Rongji used that process of internationalization to drive internal reform.  Then I observed how the next generation of leaders, businesspeople, and workers worked to benefit from both the reforms and the WTO system.

Therefore, we should also aim to connect this generation of China’s structural reforms to the changing international economic agenda – rebalancing growth, savings, and consumption; a more open and competitive service sector market, with greater international competition; technology development to boost productivity, with protection of intellectual investments and property; encouragement of global agricultural development, with attention to food security; wise and more efficient use of energy; open investment opportunities, in developing and developed economies alike; internationalization of major currencies, moving to open capital accounts and flexible exchange rates; and advancing global trade through new openings and expansion of opportunities in global supply chains.

Today, much of the world is focused on policies for macroeconomic stabilization.  They are necessary, but not sufficient.

The world also needs reforms to drive growth, and growth will require structural changes to enhance productivity, competition, and innovation.

Structural reforms in developed and developing economies can open new avenues for deeper cooperation and mutual benefit.  Instead of being bogged down in traditional disputes – with their zero-sum outcomes – perhaps mutual structural reforms offer opportunities to develop joint strategies to overcome vested interests that pose obstacles to mutual growth.

I hope that the “China 2030 Report” will provide a useful reference for policymakers, and an invaluable opportunity for countries to share knowledge and experience – an opportunity, to borrow a phrase from China’s father of modern development, Deng Xiaoping, to “learn truth from facts.”

But I also hope that this report is only the starting point.  Our aim is to build on the research, analysis, cooperation, and partnership that we have gained over the past 18 months, so that this study can be the foundation for the development of institutions and policies, especially for fiscal expenditure, social protection, rule of law, and competition.

One of the highlights of China’s successful development experience has been its ability to start at the local level, test, and then scale up.   Pilot projects can be incredibly useful learning tools.  Small steps can often produce big things.

The World Bank Group is ready to support China’s efforts to take these next steps.  One of the great benefits of this joint project has been the bonds that have developed over the course of preparing the report.  Vikram Nehru, the leader of the World Bank team, has informed me that at the end of the day, both the Chinese and World Bank teams had truly become one joint team with common objectives and deep friendships.

So I’d like to thank again the Chinese authorities and our Chinese counterparts again for being such outstanding partners.  I hope we can continue to work together.

Thank you, and I look forward to hearing your views. 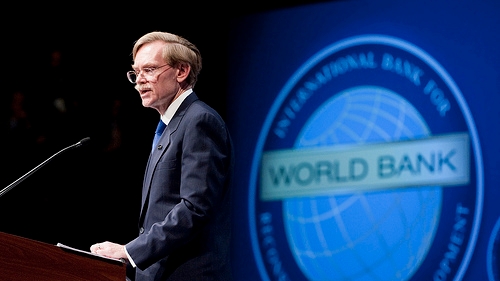