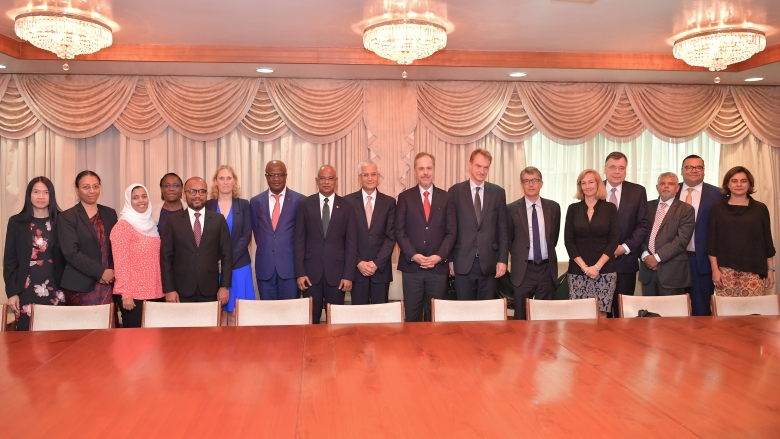 During the visit, the Executive Directors met with His Excellency the President Ibrahim Mohamed Solih, Hon. Mohamed Nasheed, Speaker of the Parliament, Hon. Ibrahim Ameer, Minister of Finance and staff of the Ministry of Finance, Ministry of Environment, Hon. Abdulla Sodiq, Mayor of Addu and public officials of the Addu city council. They also engaged in a dialogue with the Women’s Development Council of Addu and Parley Maldives.

The delegation visited Male and its suburb, Hulhumale, as well as the southernmost atoll of Addu. In Addu, they observed activities completed through a multi-donor Trust Fund, the Climate Change Adaptation Project, which was to help reduce Addu’s vulnerability to climate change. This project was managed by the World Bank with support from the European Union and DFAT (Australian Government). In Hulumale, ongoing housing projects and World Bank supported renewable energy project were also visited.

During the meeting with His Excellency the President of the Maldives, the delegation reaffirmed the development partnership of more than forty years. During the meeting with the Hon. Minister of Finance, they discussed development opportunities and key constraints facing Maldives with a focus on macro-fiscal issues, and the World Bank Group support of Government’s priority reforms. Opportunities for private sector investments were discussed during a meeting with the staff of the Ministry of Finance and the World Bank Group.

World Bank Group in Maldives
Maldives has an International Development Agency (IDA) portfolio comprising 1 IDA guarantee and 6 active investment projects focusing on fisheries, solid waste management, public financial management, and improving employment with a special focus on the tourism and IT sectors. The total net commitment is $104 million. In addition, the portfolio has a Disaster Risk Management Development Policy Loan with a Catastrophe-Deferred Drawdown Option (CAT DDO) to support macro-fiscal reforms and a Pandemic Emergency Financing Facility (PEF) to increase the Government’s capacity to deal with serious incidences of disasters and climate change. The PEF provides an additional source of financing to help the Maldives to respond to possible cross-border, large-scale outbreaks.

The International Finance Corporation— the private sector arm of the World Bank Group—has one active project in Maldives, a 2008 equity investment in the Housing Development Finance Corporation (HDFC), which stands at $2.25 million (Equity – 18 percent stake). IFC partnered with ADB and HDFC Investments Limited, a subsidiary of Housing Development Finance Corporation Limited, India, to provide an equity and loan investment package which enabled privatization of HDFC, a Government-owned housing finance institution. IFC and ADB invested $4.5 million, and HDFC Investments Limited $3.75 million. IFC and ADB also provided a $7.5 million loan each to support the project.