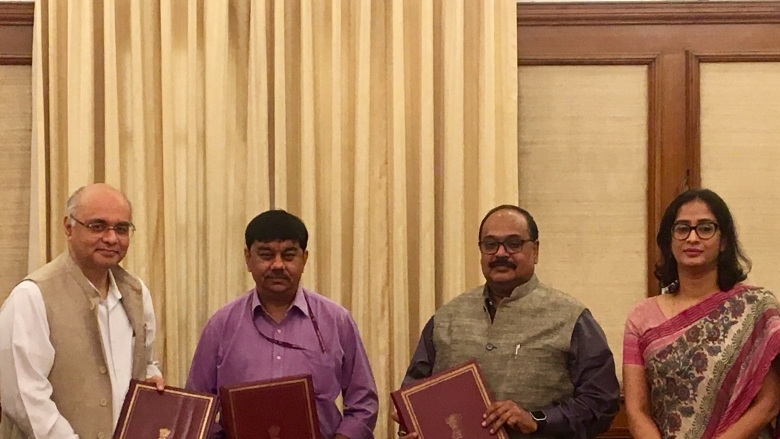 New Delhi, October 24, 2019 – The Government of India, Government of Odisha and the World Bank today signed a US$165 million loan agreement to support smallholder farmers strengthen the resilience of their production systems as well as diversify and improve the marketing of their produce, for increased income.

The Odisha Integrated Irrigation Project for Climate Resilient Agriculture will be implemented in rural areas vulnerable to droughts and largely dependent on rainfed agriculture. It will benefit about 125,000 smallholder farmer households from 15 districts of Odisha managing 128,000 ha of agricultural land. The project will strengthen the resilience of smallholder farmers against adverse climate by improving access to resilient seed varieties and production technologies, diversifying towards more climate-resilient crops, and improving access to better water management and irrigation services.

The Government of India is implementing several missions under the National Action Plan on Climate Change, which also extensively leverages adaptation of climate-smart agricultural practices and technologies,” said Sameer Kumar Khare, Additional Secretary, Department of Economic Affairs, Ministry of Finance.  "The project in Odisha is among several such initiatives supported by the government in our commitment to achieve the sustainable agriculture-related targets of the SDGs by 2030." he added.

In recent years, climate variability has seriously affected agriculture in Odisha, where farming is largely dominated by farmers with landholdings of less than two hectares. More and more agricultural areas are coming under the ambit of extreme weather events. Since 2009, the frequency of droughts in the state has increased from 1 in 5 years to 1 in 2 years. Today, about 70 percent of total cultivated area is prone to droughts compared to 40 percent in the 1970s. In fact, since 2013, floods are now devastating areas beyond the traditional flood zone. Drier areas are projected to become drier, while wetter areas will become wetter. Agriculture is also a major source of Greenhouse Gas (GHG) emissions in Odisha, responsible for about 25 percent of the GHG emissions in the state.

“Across Odisha small-scale farmers are bearing the brunt of climate change. Erratic and extreme weather are responsible for declining yields and falling incomes. At the same time, agriculture is a large contributor to GHG emissions,” said Junaid Ahmad, World Bank Country Director in India. “The project is intended to be a game-changer for the State; creating a more resilient agricultural sector, enhancing food security, increasing farmers’ incomes and reducing the GHG footprint of the sector,” he added.

The project will support the rehabilitation of 532 water tanks - expected to irrigate 91,435 ha; promote productivity improvements at the farm level; support farmers to reduce the current emphasis on food grains (especially paddy and wheat) and increase the share of high-value and more nutritious products like fruits and vegetables; and provide marketing support to farmers who are able to generate a marketable surplus.

“Rehabilitating existing tanks will make agriculture more productive and climate-resilient for smallholder farmers,” said Ranjan Samantaray, Senior Agriculture Specialist and World Bank’s Task Team Leader for the project. “This project will support the Government of Odisha’s vision to build the resilience of the agriculture sector to climate change, expand cultivable area under assured irrigation and improve water use efficiency,” he added.

The $165 million loan from the International Bank for Reconstruction and Development (IBRD), has a 6-year grace period, and a maturity of 24 years.