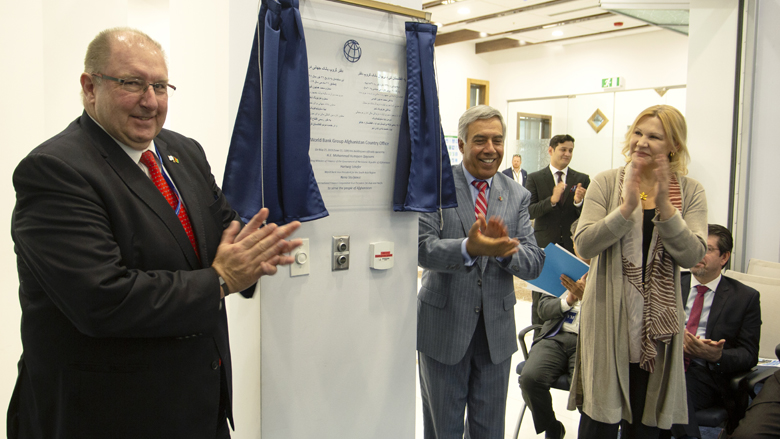 The new building was officially opened by Mohammad Humayon Qayoumi, Acting Minister of Finance and Chief Advisor on Infrastructure and Technology to the President of Afghanistan; Hartwig Schafer, World Bank Vice President for the South Asia Region; and Nena Stoiljkovic, Asia and Pacific Vice President for the International Finance Cooperation, the private-sector financing arm of the WBG.

The ceremony was attended by senior Afghan government officials, representatives from international development partners in Kabul and other WBG staff.

Speaking at the inauguration ceremony, Hartwig Schafer, World Bank Vice President for the South Asia region, said: “ At this critical juncture Afghanistan faces deep poverty and economic pressure and the World Bank’s commitment is crucial to help the country recover and create better living standards for its people. The World Bank is strongly committed to continue helping them in their efforts to create a better future.”

The new premises, on a plot purchased from the Government of Afghanistan, were built through a close collaboration between the WBG and Afghan businesses and workers. Construction work started in November 2016 and was completed in January 2019.The new building provides an improved and safe working environment for the Bank’s staff and its partners to better coordinate their efforts to implement critical development programs.

Speaking at the ceremony, Stoiljkovic said: “This is a strong signal that IFC remains committed to helping Afghanistan's private sector grow and tackle some of the country’s most pressing development challenges. A competitive economy which will propel the country towards private sector led growth is critical for creating opportunities for Afghan people to escape poverty.”

World Bank Vice President Schafer thanked the World Bank staff in Afghanistan for their invaluable efforts and expressed the hope that the new office space would provide a conducive environment for the success of their work.