WASHINGTON, December 17, 2018—The World Bank, Build Academy, Airbnb, the Global Facility for Disaster Reduction and Recovery (GFDRR), and UN-Habitat today announced the winners of the Resilient Homes Design Challenge.  The Challenge generated designs for disaster-resilient and sustainable houses that could be constructed for under $10,000 for people living in areas affected by or vulnerable to disasters caused by natural hazards.

When last year’s Hurricane Maria hit the Caribbean island country of Dominica, only 11 percent of the homes on the island remained intact. It is often the poorest that suffer the most from these shocks.

The Challenge called on architects, engineers, designers, and students from all over the world to design proposals for up to three scenarios:

Over 3,000 professionals from over 120 countries participated in the Challenge, resulting in over 300 team submissions. A jury of international experts selected three winning designs for each of the three scenarios, for a total of nine winners.

The jury also selected one Special Mention for each scenario:

The jury was impressed by the quality of the submissions as well as the diversity of materials and construction approaches, ranging from traditional construction to flat-packing, 3D-printing, and more. The jury gave due consideration to resilience, sustainability, replicability, and designs that suited the local cultural context, whose construction process would use local materials and enable local employment rather than requiring significant external expertise and materials.

Hashim Sarkis, Dean of the MIT School of Architecture & Planning, summarized the jury’s thinking process: “We’ve seen this repeatedly in disaster situations, where there are solutions that seem fine on paper but are ultimately rejected and abandoned by people. I would definitely go for the more localized construction systems and approaches that changed existing elements or introduced new details that makes the houses stronger, faster, and easier to build, but are also more dignified.”

Winning designs will be published, and the winners will be invited to exhibit at the World Bank in Washington, D.C., and other select global venues. Winning designs could also eventually inform resilient housing or reconstruction work for World Bank-funded projects in the Caribbean, South Asia, and East Asia, for example.

The next phase will be testing the winning design housing models for their resilience. This will be followed by a continued collaboration with the designers to tweak and improve the designs to get them ready for real-world application.

“We should not be looking at this design competition as a one-off. We should look at this as the beginning of a community of practice around the very important agenda of resilient housing design and retrofitting. We hope that this competition has jump-started a movement and a community of practice that can exchange knowledge, experience, and ideas, and continue to grow,” emphasized Sameh Wahba, World Bank Director for Urban and Territorial Development, Disaster Risk Management and Resilience.

Initiatives such as the Challenge support a renewed engagement in community-driven housing resilience efforts.  They also help support the achievement of the 2030 Agenda and SDG 11.1, which calls for providing safe, affordable, and resilient housing for those most in need. 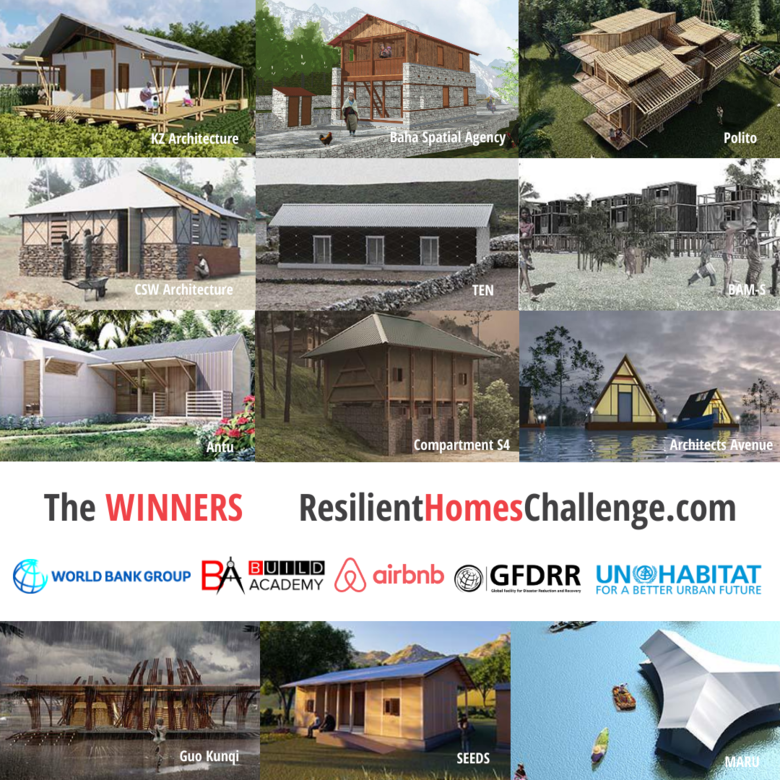