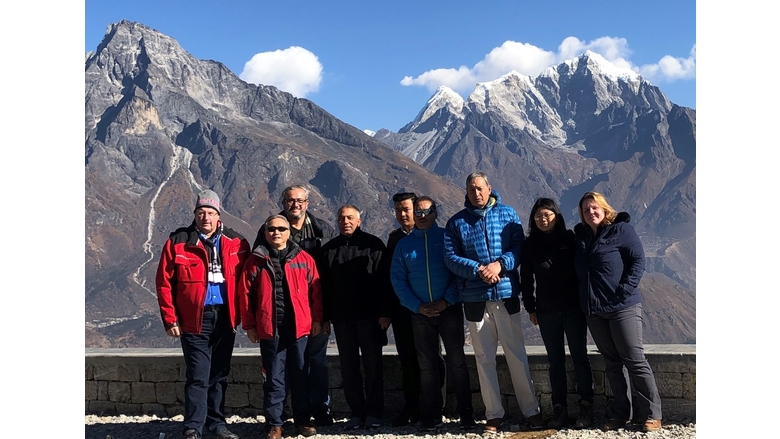 KATHMANDU, November 17, 2018— World Bank Vice President for South Asia Region, Hartwig Schafer today reiterated the World Bank’s commitment to support Nepal in its ambitious transition to federalism, as he concluded a five-day visit to the country.

During his meeting with Prime Minister KP Sharma Oli, Schafer congratulated the government’s visionary goal of reaching middle-income country status by 2030, reaffirmed the World Bank’s commitment to support government priorities, and to seek additional resources through various available windows. In his meeting with Finance Minister Dr. Yuba Raj Khatiwada, Mr. Schafer also discussed further support to the federalism transition, as well as a potential International Investors’ Conference in 2019 in support of Nepal’s agenda to crowd in private finance for development.

“With a stable government that has prioritized broad-based reforms and private sector-driven growth, I am positive that Nepal can achieve higher growth rates for the next several years. To sustain such growth, we want to help Nepal mobilize investments from sources that go beyond traditional development finance. We call this approach Maximizing Finance for Development. Private sector investment will only come if there is a transparent, conducive policy environment,” he said, “Nepal is one of the first countries where we are approaching this in a systematic way with the World Bank, IFC and MIGA coming in and helping to provide a platform for private investments in the energy, technology, and other sectors. This will also create jobs for more and more Nepalis, which is the need of the hour.”

The Vice President also had a joint field visit with Finance Minister Dr. Yuba Raj Khatiwada and Minister for Energy, Water Resources and Irrigation Barsha Man Pun to discuss the potential of tourism, hydropower and private sector investment in the country. The team visited Solukhumbu District and Sankhuwasabha District before observing the houses being rebuilt after the earthquake in the Majhi settlement of Gaikhura in Manthali Municipality, Ramechhap.

Walking through the houses being rebuilt, Schafer met members of local communities, commending their resilience and efforts to build back better after the earthquake. He also met elected members of parliament and local level representatives. “It is heartening to see the collective effort of so many actors to ensure that people’s homes and lives are rebuilt,” Schafer said. “We must pick up the pace of reconstruction, and also ensure that disaster risk reduction measures are put in place to deal with future contingencies.” The World Bank has provided a credit of $500 million to the Government of Nepal through the Earthquake Housing Reconstruction Project.

In Kathmandu, Schafer participated in the launch of a joint report of the World Bank Group entitled “Country Private Sector Diagnostic: Creating Markets in Nepal”. He was also part of the signing of two agreements between the Government of Nepal and World Bank. The agreements, totaling US$ 155.7 million, will be invested in the construction and maintenance of safe, resilient and cost-effective bridges in Nepal, and in improving food security of vulnerable households and communities. In his first visit to Nepal as the World Bank Vice President for South Asia, Schafer also met with opinion leaders, senior government officials and civil society representatives. In engaging with the private sector, he visited Saral Urja, the investee clients of Business Oxygen (BO2), an IFC SME-Venture Fund, and Incessant Rain Animation Studios, a state-of-the-art animation and visual effects facility.

After his interactions with the team at Incessant Rain, Schafer commented, “I really enjoyed this opportunity to visit an enterprise that is nurturing the artistic and creative talents of the Nepalese youth. With a world class facility that provides services to well- known international clients, organizations like this play an important role in putting Nepal on the map as an outsourcing destination. Apart from contributing to the economic growth through exports and job creation, it is a pleasure to see a home-grown company that promotes the country’s rich cultural heritage and diversity. This is the kind of future we want for the private sector in Nepal, and the World Bank is committed to support this vision.”

His special message for Nepal can be found here.