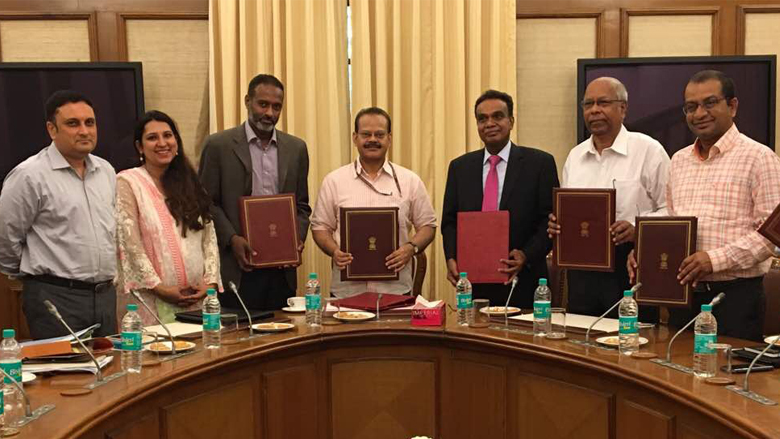 The Asian Infrastructure Investment Bank (AIIB) also signed a $140 million loan agreement with the government for this project. The project is the first in India being co-financed by the AIIB. The World Bank and AIIB will provide loans in a 60:40 ratio for all components of the project.

“The project is part of the Government of India’s Power for All program launched in 2014. Andhra Pradesh is among a few states selected for the roll-out of the Power for All program. The energy demand in the state is expected to grow and substantial investments will be needed to meet this rising demand,” said Raj Kumar, Joint Secretary, Department of Economic Affairs, Ministry of Finance. “This project will help AP improve its operational efficiency in the transmission and distribution sector so that it can provide reliable and affordable electricity to its citizens,” he added.

It will build new transmission and distribution infrastructure, as well as put in place systems to improve the technical efficiency and commercial performance of the state power sector utilities.

The project will help bring in modern technology solutions such as automated sub-stations and network analysis and planning tools to provide reliable power supply and enhance customer satisfaction.

While a significant portion of the proposed investments are aimed at improving power supply to rural areas, the project will also focus on demonstrating the deployment of smart grids in selected towns.

“By increasing the supply of reliable electricity to households, industries, businesses and various other productive sectors, the project will contribute to economic development, poverty alleviation, and inclusive growth in Andhra Pradesh,” said Hisham Abdo Kahin, Operations Manager and Acting Bank Country Director, World Bank, India. “Around half of the proposed investments are targeted towards improving power supply in rural areas, thus providing opportunities to increase household incomes and standards of living for some of the poorer communities in India,” he added.

Some of the major components of the project include strengthening of the intra-state transmission and distribution network to disperse power to the load centers in the state.  While overall AT&C loss levels in Andhra Pradesh are low in comparison to many states, losses in a few rural districts are high. The state is planning measures like a High Voltage Distribution System (HVDS) in selected rural areas supported by the project. The distribution companies in Andhra Pradesh are ahead of many of their peers in deploying ICT based technologies. Under this project they now plan to move to the next level by developing a power distribution grid which will help monitor and improve the operational efficiency of the system.

The project will also support smart consumer meters, with two-way communication and backend IT infrastructure, deployed in select urban towns. These meters will not only reduce technical and commercial losses, but also improve peak load management. The meters are expected to provide consumers with better access to data which will encourage them to reduce their electricity consumption.

“Since 2014, the Government of Andhra Pradesh has taken significant steps to improve the power sector in the state. By supporting the government’s plans for improving the commercial performance of its distribution companies, the project will go a long way in helping Andhra Pradesh move into a higher growth trajectory,” said Mani Khurana, Senior Energy Specialist and World Bank’s Task Team Leader for the project. “The smart grid interventions under the project will demonstrate positive impacts on reliability and network management which can inform the design of similar projects in other states.” she added.

The $240 million loan from the International Bank for Reconstruction and Development (IBRD), has a 5-year grace period, and a maturity of 19 years.