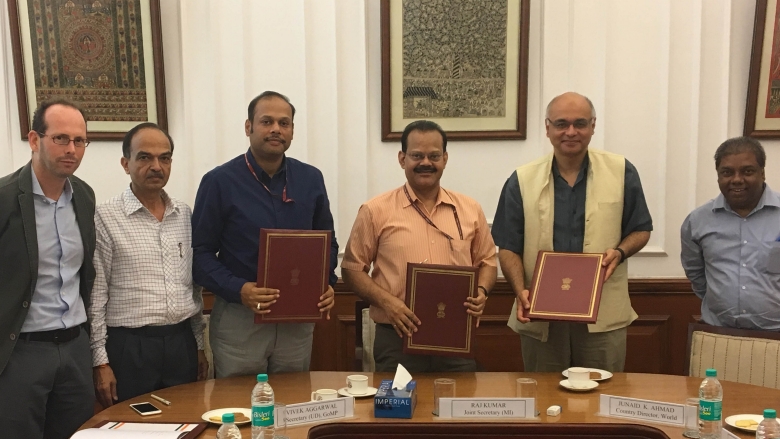 NEW DELHI, June 12, 2017 – The Government of India, the Government of Madhya Pradesh and the World Bank Board today signed a US$116.20 million loan to strengthen the financial and administrative capacity of the Madhya Pradesh Urban Development Company Ltd (MPUDC). MPUDC will serve as a nodal implementing agency for the state and support Urban Local Bodies (ULBs) to implement citywide infrastructure improvement projects.

“With rapid levels of urbanization in the state, strengthening the financial and administrative capacity of ULBs is the need of the hour. This project will help urban local bodies plan, finance and deliver urban services better and ensure that cities continue to play an important role in fostering economic growth,” said Raj Kumar, Joint Secretary, Department of Economic Affairs, Ministry of Finance, Government of India.

Based on the World Bank’s previous engagement with similar state municipal finance agencies in Tamil Nadu and Karnataka, as well as its international experience in developing and strengthening similar institutions, the Government of Madhya Pradesh (GoMP) has now sought World Bank support for the institutional development of the MPUDC to help improve key urban services, and increase the revenue potential of the participating ULBs.  MPUDC will also support GoMP prepare a plan for developing the Bhopal Indore Super Corridor (BISCO) region.

In addition, the project will support urban policy reforms in the state as identified under the Atal Mission for Rejuvenation and Urban Transformation (AMRUT), a mission aimed at transforming 500 cities and towns into efficient urban living spaces. At least 51 ULBs have been selected to implement these reforms.

“Madhya Pradesh is a rapidly urbanizing state and has undertaken key reform actions in the recent past to improve delivery of essential municipal services,” said Junaid Ahmad, World Bank Country Director in India. “This project will strengthen the government’s efforts to provide services, particularly in the areas of water and sanitation, by bringing in best practices both within the country and globally.”

Over 620,000 urban residents, of which at least 45 percent will be women, are expected to benefit directly through access to improved urban services across a range of urban sectors, mostly water and sanitation. With the consolidation of MPUDC as a nodal implementing agency of the state, many more residents are expected to be benefited through a series of investments undertaken by other development agencies and central government schemes.

Over the years Madhya Pradesh has undertaken some key reform actions in the urban sector like the enactment of the Madhya Pradesh Public Services Guarantee Act to ensure timely delivery of essential municipal services from a single window; establishment of citizen facilitation centers; introduction of common tendering and integrated computerized standard schedule of rates; design of a municipal e-governance system for all ULBs in the state (e-Nagar Palika); and development of automated building plan permission systems among others.

However, the state continues to face relatively low levels of access to basic services such as water, sewerage, street lighting, refuse disposal, and lighting. Three in ten poor people in urban MP have no access to piped water; and over half have no sanitation.

The project will support six areas of urban policy reforms for 51 ULBs. They include reforms related to property tax, user charges, advertisement tax, accounting, budgeting, and credit improvement. It will help improve the efficiency in property tax collection, develop a state-level policy for user charges, monitor reforms to ensure that all ULBs migrate completely to double entry accrual systems as part of its e-Nagar Palika initiative, and revamp the budgeting process in certain ULBs to enable them to clearly forecast their increased financial obligations to manage investments, among others. These reform areas have been selected from the list of reforms identified by the national AMRUT program.

Madhya Pradesh is considered to be vulnerable to climate change. It is highly susceptible to variations in distribution and patterns of rainfall, which, in turn, affects access to drinking water currently sourced largely (almost 95 percent) from underground sources. The 2014 MP State Action Plan on Climate Change (SAPCC) has identified water pollution as a critical area of concern, and treatment of municipal wastewater is a stated priority of the government. This project will address some of the climate vulnerabilities through its infrastructure investments. It is estimated that US$36.5 million or 31.4 percent of the loan will result in climate change co-benefits through investments in water supply and sewerage.

“The objective of this project is to develop institutions to ensure that good-quality urban infrastructure projects are made sustainable at the local level. The focus of this project is to support the Government of Madhya Pradesh develop the right rules, procedures, human capital and technical capacity of the MPUDC so that it can strengthen the ULBs to perform efficiently,” said Uri Raich and Abhijit Ray, World Bank’s Senior Urban Specialists and co-Task Team Leaders for the project.

The loan, from the International Bank for Reconstruction and Development (IBRD), has a 5-year grace period and a final maturity of 35 years.