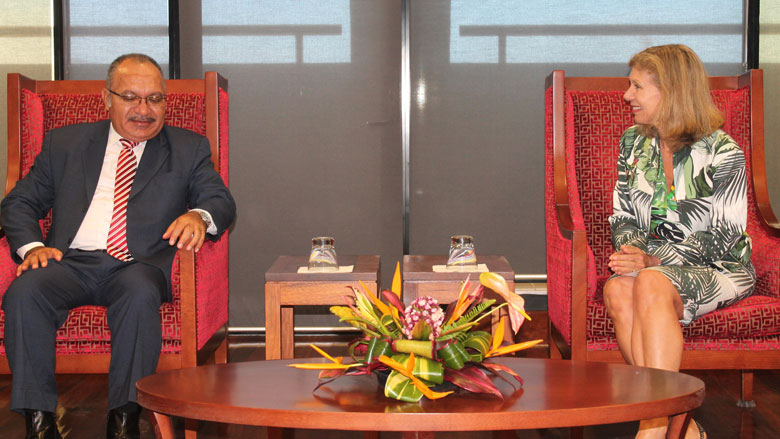 Mrs. Veevers-Carter brings more than two decades of economic development experience to PNG, where she will lead a program which comprises US$399 million (PGK1.2 billion) of investments focused on agriculture, road maintenance and rehabilitation, water supply and sanitation, urban youth employment, rural service delivery; including rural communications, the energy sector and access to finance for small-to-medium enterprises.

Mrs. Veevers-Carter reconfirmed the World Bank’s commitment to further support Papua New Guinea, saying the World Bank Group has scaled up its engagement in PNG in recent years, and is committed to continuing this support long term as the country moves towards middle-income status through an important period of challenge, change and growth.

“I look forward to continue our work with the Government, national authorities, civil society and the private sector, as well as with development partners as we strive to support PNG’s long term development goals,” she said.

Prior to arriving in PNG, Mrs. Veevers-Carter was the World Bank Country Manager for Tajikistan, based in Dushanbe. She previously held the position of a Sector Manager for Transport, ICT and Energy in the World Bank’s Middle East and North Africa Region, where she focused on regional connectivity in these sectors. Prior to this position, from 2005 to 2011, Mrs. Veevers-Carter was the Manager of the Global Partnership on Output-Based Aid, a World Bank-administered trust fund focused on the delivery of basic services to the poor, such as water, sanitation, energy, and health.

Before joining the World Bank Group, Mrs. Veevers-Carter worked at the Inter-American Development Bank (IADB), and the Dutch Development Bank, FMO. She qualified as a Chartered Accountant at KPMG, and is a graduate of the London School of Economics.

The World Bank Groups engagement in PNG is guided by a six-year Country Partnership Framework (2013-18). The strategy aims to ensure everyone, regardless of their gender, where they live, or their social and economic circumstances, will benefit equally from Papua New Guinea’s development goals. It also seeks to promote prudent management of revenues.