WASHINGTON, April 21, 2017 – Remittances to developing countries fell for a second consecutive year in 2016, a trend not seen in three decades, says the latest edition of the Migration and Development Brief, released today during the World Bank’s Spring Meetings.

Low oil prices and weak economic growth in the Gulf Cooperation Council (GCC) countries and the Russian Federation are taking a toll on remittance flows to South Asia and Central Asia, while weak growth in Europe has reduced flows to North Africa and Sub-Saharan Africa.

The decline in remittances, when valued in U.S. dollars, was made worse by a weaker euro, British pound and Russian ruble against the U.S. dollar.

As a result, many large remittance-receiving countries saw sharp declines in remittance flows. India, while retaining its top spot as the world’s largest remittance recipient, led the decline with remittance inflows amounting to $62.7 billion last year, a decrease of 8.9 percent over $68.9 billion in 2015.

Remittances to other major receiving countries are also estimated to have fallen last year, including Bangladesh (-11.1 percent), Nigeria (-10 percent), and Egypt (-9.5 percent). The exceptions among major remittance recipients were Mexico and the Philippines, which saw inflows increase by an estimated 8.8 percent and 4.9 percent, respectively, last year.

“Remittances are an important source of income for millions of families in developing countries. As such, a weakening of remittance flows can have a serious impact on the ability of families to get health care, education or proper nutrition,” said Rita Ramalho, Acting Director of the World Bank’s Global Indicators Group.

In keeping with an improved global economic outlook, remittances to developing countries are expected to recover this year, growing by an estimated 3.3 percent to $444 billion in 2017.

The global average cost of sending $200 remained flat at 7.45 percent in the first quarter of 2017, although this was significantly higher than the Sustainable Development Goal (SDG) target of 3 percent. Sub-Saharan Africa, with an average cost of 9.8 percent, remains the highest-cost region. A major barrier to reducing remittance costs is de-risking by international banks, when they close the bank accounts of money transfer operators, in order to cope with the high regulatory burden aimed at reducing money laundering and financial crime. This has posed a major challenge to the provision and cost of remittance services to certain regions.

The Brief notes that several high-income countries that are host to many migrants are considering taxation of outward remittances, in part to raise revenue, and in part to discourage undocumented migrants. However, taxes on remittances are difficult to administer and likely to drive the flows underground.

In a special feature, the Brief notes the absence of a formal definition of the Global Compact on Migration, and advances a working definition of “an internationally negotiated framework for governments and international organizations to harness the benefits of migration while navigating its challenges.” It calls for regional and bilateral agreements that address migration, to develop a normative framework or guidelines for governments and international organizations.

"Migration will almost certainly increase in the future due to large income gaps, widespread youth unemployment, ageing populations in many developed countries, climate change, fragility and conflict," said Dilip Ratha, lead author of the Brief and head of the Global Knowledge Partnership on Migration and Development (KNOMAD). "Currently, the global migration architecture is fragmented and undefined. The global community needs to systematically map the current institutional framework, clarify the missions of key organizations, and develop normative guidelines by building on existing conventions that address migration.”

Latin America and the Caribbean was the only region to see growth in remittances in 2016, estimated at $73 billion, an increase of 6.9 percent over 2015, as remittance senders took advantage of the strong U.S. labor market and beneficial exchange rates.  Robust remittance growth was estimated for Mexico, El Salvador and Guatemala. In 2017, remittances to the region are projected to grow by 3.3 percent to $75 billion.

Remittance flows to Sub-Saharan Africa declined by an estimated 6.1 percent to $33 billion in 2016, due to slow economic growth in remittance-sending countries; decline in commodity prices, especially oil, which impacted remittance receiving countries; and diversion of remittances to informal channels due to controlled exchange rate regimes in countries such as Nigeria. Remittances to the region are projected to increase by 3.3 percent to $34 billion in 2017.

Remittance flows to Europe and Central Asia continued to be severely affected for a third year in a row, contracting by an estimated 4.6 percent to $38 billion in 2016. Low oil prices and sanctions continued to impact Russia, which is both a recipient and a remittance-source country. Uzbekistan saw remittances shrink by nearly one-third since 2013, while Azerbaijan, Turkmenistan, and Tajikistan were also hard hit. For 2017, remittances to the region are expected to increase by 6.6 percent to $41 billion, mainly due to stronger growth in Russia and several European countries.

Remittances to the East Asia and Pacific region declined by an estimated 1.2 percent in 2016 to $126 billion. Flows to major recipients presented a mixed picture, with remittances to the Philippines growing by almost 5 percent, while those to Indonesia fell by 4.4 percent. For 2017, remittances to the region are forecast to grow 2.5 percent to $129 billion. 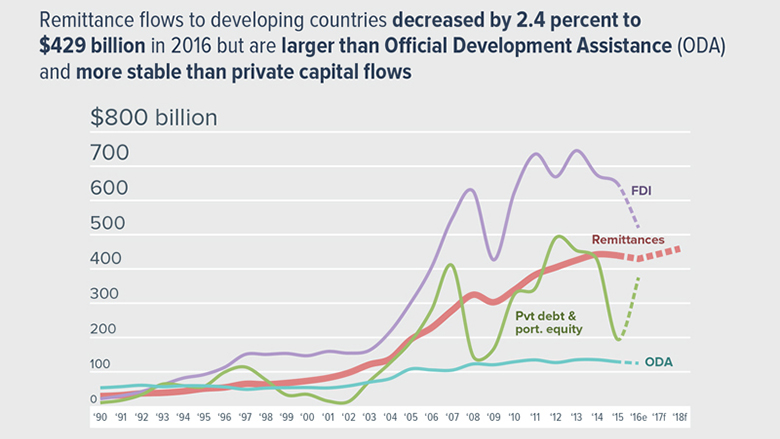 Trends in Migration and Remittances 2017