NEW DELHI, April 17, 2017 – The Government of India and the World Bank today signed the US$ 175 million loan agreement for the National Hydrology Project. The project will strengthen the capacity of institutions to assess the water situation in their regions and reduce their vulnerability to recurring flood and droughts, saving hundreds of lives and livelihoods.

With rainfall in India being highly seasonal and 50 percent of precipitation falling in just 15 days and over 90 percent of river flows in just four months, the country continues to be water-stressed and is faced with the challenge of managing its water needs amidst recurring floods and drought.

"The project is expected to help forge an integrated approach to developing, managing, and regulating both surface and groundwater resources jointly at the basin and aquifer scale. It would also strengthen the institutional capacity for integrated water resources management at the center and in the states,” said Raj Kumar, Joint Secretary, Department of Economic Affairs, Ministry of Finance, Government of India.

The loan agreement for the project was signed by Raj Kumar, Joint Secretary, Department of Economic Affairs, Ministry of Finance, on behalf of the Government of India and Genevieve Connors, Program Leader and Acting Country Director, on behalf of the World Bank. 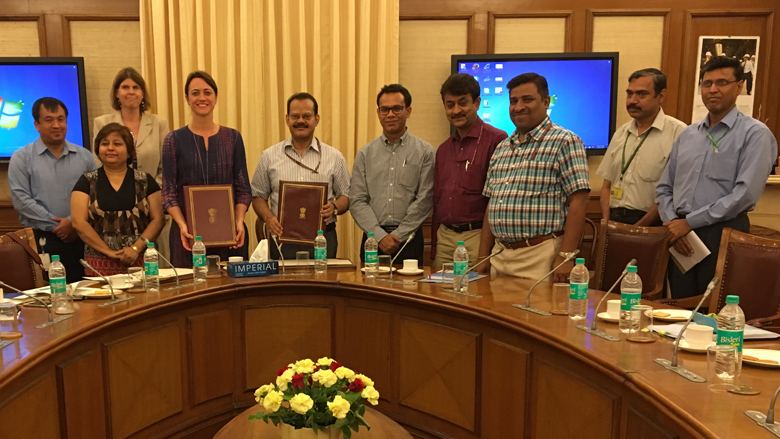 The National Hydrology Project, signed today, will build on the success of the Hydrology Project-I and Hydrology Project-II, under which, for the first time, real-time flood forecast systems were integrated with weather forecasts in two large river systems (Krishna and Satluj-Beas), giving reservoir managers an accurate picture of the water situation in their region. As a result, the time available for early warnings on flood and preparation for flood management improved from hours to days, which led to saving hundreds of lives and avoided flood damages ranging from US$17 million to US$65 million in a year.

This project will now scale up the successes achieved under HP-I and HP-II to cover the entire country, including the states in the Ganga, and Brahmaputra-Barak basins. Apart from helping states that have already benefited from the earlier two projects to further upgrade and complete their monitoring networks, it will help new states to better manage water flows from the reservoirs. Memorandum of Agreements (MOAs) have already been signed between the central government and the states to integrate and establish the National Water Informatics Center. National Flood Forecasting Systems with an advance warning system and reservoir operation systems as well as water resources accounting in river basins will be included under the project.

“In the context of climate change, advanced flood management and enhanced river basin planning are essential for building livelihoods and sustaining economic growth,” said Genevieve Connors, Program Leader and Acting Country Director, World Bank in India. “This project has the potential to help communities plan in advance to build resilience against possible uncertainties of climate change.”

It will also help the states monitor all the important aspects of the hydro-meteorological cycle and adopt the procedures laid out in the earlier projects such as how much rain or snow has fallen right in the catchments of rivers, how rapidly the snow will melt, the speed with which the water is flowing, how much silt has built up, how much water will reach the reservoir, and how soon it will do so. Sensors in the field will instantly transmit this information to data centers through satellite or mobile phone technology, enabling managers to form a clear picture of the water situation unfolding in their region.

“Based on our experience over the last 20 years in establishing Hydrological Information Systems in southern India and in Himachal Pradesh and Punjab, both national and state governments are now committed to an integrated river basin planning and management. This project responds to this demand by extending its reach to cover the entire country,” said Anju Gaur, Senior Water Resources Specialist and World Bank’s Task Team Leader for the project.

The loan, from the International Bank for Reconstruction and Development (IBRD), has a 6-year grace period, and a maturity of 23 years.