To be implemented in six north eastern states of Assam, Manipur, Meghalaya, Mizoram, Nagaland and Tripura

NEW DELHI, November 28, 2016 – The Government of India, POWERGRID, the six north eastern states of Assam, Manipur, Meghalaya, Mizoram, Nagaland, and Tripura and the World Bank today signed a US$ 470 million loan agreement to support these six states to augment their transmission and distribution (T&D) networks and strengthen the capacity of the state-level power utilities/ departments in extending last mile electricity connections to households. 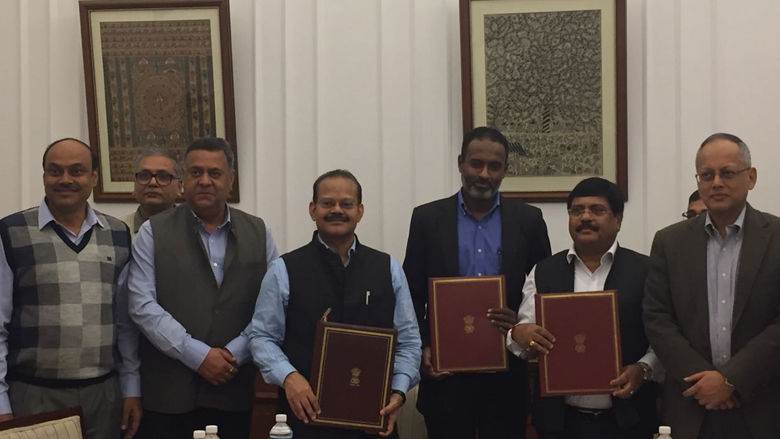 The existing power network infrastructure in the six participating states of Assam, Manipur, Meghalaya, Mizoram, Nagaland and Tripura is old and has not been adequately maintained. This makes it prone to high technical and non-technical losses, and leads to frequent interruptions and outages in power supply. In addition, most of the utilities incur commercial losses due to inadequate cost structures and tariffs.

"This project will strengthen and augment the intrastate transmission, sub-transmission, and distribution networks by upgrading old and constructing new lines and associated substations in the six participating states of Assam, Manipur, Meghalaya, Mizoram, Nagaland and Tripura. These investments will allow the transmission network to transfer electricity more efficiently and with minimum wastage, and help the utilities supply reliable electricity at a stable voltage to consumers," said Mr Rajkumar, Joint Secretary, Department of Economic Affairs, Ministry of Finance.

The North Eastern Region Power System Improvement Project will be implemented through POWERGRID, which has been appointed as the implementing agency by the Government of India and it will provide technical and managerial support for improving intra-state transmission and distribution systems in these states. After commissioning, the assets created under the project will be owned, operated and maintained by the respective state power utilities and departments. POWERGRID will also help build the capacity of the state departments and utilities to continue managing the refurbished networks in an optimum and efficient manner.

“The north eastern region, which is well-endowed with rich natural resources, is now aspiring to catch up with the rest of the country in growth and investment climate,” said Hisham Abdo, Operations Manager and Acting Country Director, World Bank India. “The project will support the six northern eastern states get better access to power, allow businesses to grow, and jobs to be created for the overall economic development of the region, currently constrained by power shortages.”

The north eastern region has a very small and underdeveloped power system. The annual per capita power consumption in the region is around one-third of the national average while household electricity access rates are less than the national average. While generation capacity is slowly being increased, there have been inadequate investments in the transmission, sub-transmission and distribution network in the region because of a combination of factors, including limited financial resources. As a result, the existing intrastate T&D infrastructure in all the participating north eastern states has bottlenecks and inadequate transfer capacity, which constrains power delivery to the consumers. Unless these network constraints are removed, they will continue to prevent consumers from benefitting from the additional power generation in the region. The NER Vision 2020 also recognizes the challenges facing the power sector in the region and its inability to promote economic development.

“The project supports transmission and distribution investments that will increase the availability of power in the participating states and hence create the conditions for the expansion of electricity access to unserved households. Further, increased availability of electricity supply will help spur growth of its productive uses in the region, leading to inclusive growth, and sustainable development,” said Rohit Mittal, Senior Energy Specialist and Kwawu Mensan Gaba, Lead Energy Specialist and World Bank’s Task Team Leaders for the project. “The projects’ objective of upgrading and expanding the power transmission network in the NER will lead to better integration of the region with the rest of the country. The project implementation has started on a strong note with contracts more than US$ 260 million already awarded,” they added.

The other important component under the project is to strengthen the core skills of the utilities in the areas of operations and management (O&M) and ensure the sustainability of assets created under the project. This will be based on a roadmap developed for each state on the basis of state-specific diagnostic studies, complemented with detailed discussions with key stakeholders of the states.

The loan, from the International Bank for Reconstruction and Development (IBRD), has a 5-year grace period, and a final maturity of 24.5 years.