Europe and Central Asia: Modest Recovery in the West, but Sharp Slowdown in the East

Astana, 26 October, 2015 – In the midst of an uncertain global economic environment, GDP growth for the Europe and Central Asia (ECA) region is expected to increase to 1.4 percent for 2015, with 1.8 percent growth projected for 2016. But prospects for countries vary widely: the western part of the region will likely continue its fragile recovery in 2016, while the eastern part of the region will increasingly suffer large income losses.

“The Europe and Central Asia region has still not fully recovered from the after-effects of the global financial crisis and part of the region is facing strong headwinds.” said Cyril Muller, World Bank Vice-President for Europe and Central Asia, on the occasion of the launch of the ECA region’s Economic Outlook, “Low Commodity Prices and Weak Currencies”, in Astana, Kazakhstan.

“The eastern part of ECA is hit hard by declining commodity prices, particularly oil, while geopolitical risks and increased financial market volatility in emerging markets are dampening potential growth across all countries,” added Muller. “To build economic resilience and set the stage for robust growth in the eastern part of the region, it is critical, therefore, to adjust to the ‘new normal’ of lower oil prices with exchange rate flexibility and an agile business climate.” 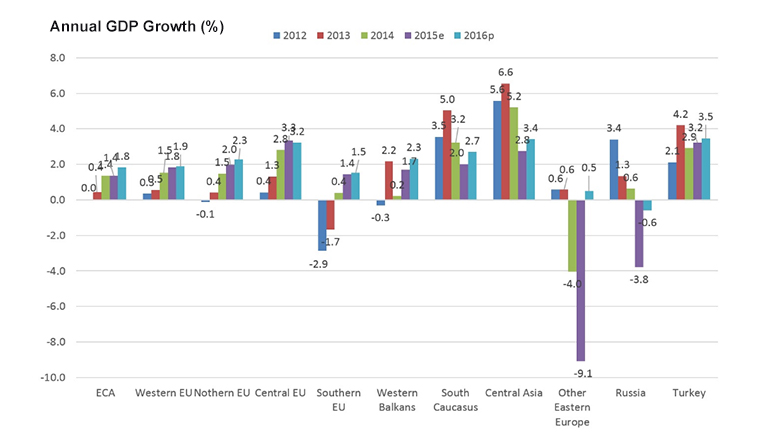 Growth is slowly accelerating in the European Union (EU) and the Western Balkans – increasing from 1.5 in 2014 to 1.9 percent in 2015. Southern Europe, while still experiencing modest growth, is likely to see the sharpest acceleration, from 0.4 percent last year to 1.3 percent this year.

But Central Europe is achieving the fastest growth – at an estimated rate of 3.3 percent for 2015. The base-case scenario sees this year’s growth accelerating into 2016, but there are nevertheless significant uncertainties for the region going forward.

“The recovery in the European Union remains fragile,” said Hans Timmer, World Bank Chief Economist for Europe and Central Asia, at the report launch. “Sustained recovery is only possible with a rebound in investments, which are still 12 percent below their 2007 levels. Europe’s heavy reliance on the banking sector and the cumbersome resolution of the debt overhang have delayed this rebound. The global uptick in financial market volatility, as well as lingering geopolitical risks, have made the necessary recovery of investments more uncertain.”

“The relatively small size of capital markets as an alternative source of financing to bank lending also has limited the speed of recovery,” Timmer added. “Moves toward a capital markets union, although still far from being implemented, would help deepen private sources of capital by unifying rules across the region and help investors better assess risks to deepen private investment.”

The eastern part of the ECA region has experienced outright contraction over the last 12 months, with output expected to decline 0.9 percent in 2015, and then recover to a modest 1.5 percent growth in 2016 as countries continue to adjust to lower oil prices. The sharpest declines have been in Russia, which is projected to contract 3.8 percent in 2015 and 0.6 percent in 2016, due to ongoing weakness in oil markets.

The South Caucasus, other Eastern European countries (Belarus, Moldova, and Ukraine), and Central Asia have been hard hit by the downturn in Russia and the oil price shock, directly and indirectly through the fall in oil prices, remittances and trade. Growth rates in 2015 are expected to be about half those seen in 2014 in the South Caucasus and Central Asia, while other Eastern European countries are estimated to have fallen further into recession.

In Turkey, growth is estimated to increase modestly from 2.9 percent in 2014 to 3.2 percent in 2015. As the region’s markets adjust to lower prices and advanced country economies, particularly in the EU and the US, continue to expand, Eastern Europe, Central Asia, and Turkey are all expected to see higher, albeit modest, growth in 2016, while Russia is projected to continue to contract, but at a more modest pace.

For countries directly and indirectly adversely affected by lower oil prices in Eastern Europe and Central Asia, GDP tells only a small part of the story when it comes to the sharp decline in spending power available to their citizens. Real domestic income of a country includes real GDP and also remittances received from abroad, as well as gains or losses from changes in export and import prices. The effect of the oil price shock and devaluation of the ruble has had a much stronger adverse impact on buying power than what is reflected simply by GDP.

Given the weaker buying power of many households in the eastern part of the region, poverty rates are expected to rise in several countries. This is a reversal of the previous downward trend toward lower poverty rates across the region.

Poor households in oil-exporting countries and remittances-receiving countries are being hit by higher import prices due to devaluations, the disappearance of jobs in construction and other non-tradable sectors, and because of fiscal pressures. This highlights the need for a quick adjustment to the new economic reality. Only if countries seize new opportunities in tradable sectors can the deterioration of poverty rates be stopped.

Exchange rate adjustments, along with prudent monetary policy to keep domestic inflation under control, will help countries regain competitiveness in global markets in the eastern part of the region. Moreover, the pace of longer-term reforms has slowed and large gaps remain for Eastern Europe, Central Asia, and the South Caucasus – for example, in competition policy, small scale privatization, trade and foreign exchange regimes, and price liberalization.

Reinvigorating reforms is a necessary step toward building economic resistance and setting the region back on the path to robust growth. The World Bank is helping its ECA client countries address these and other challenges to reduce poverty and boost shared prosperity through policy dialogue, analytical work, project funding, and reimbursable assistance services. 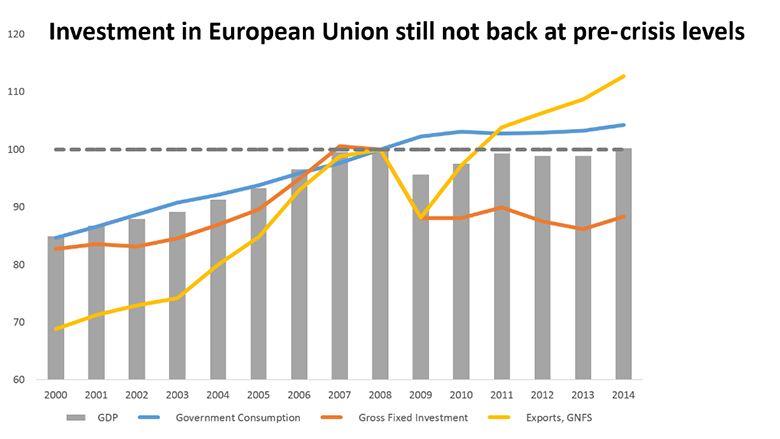 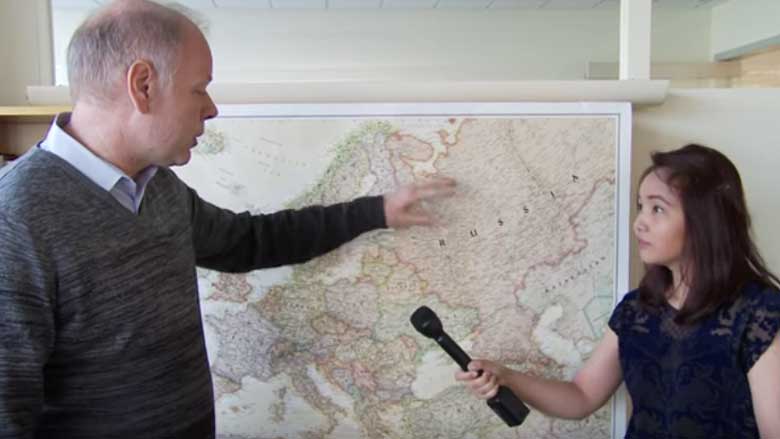 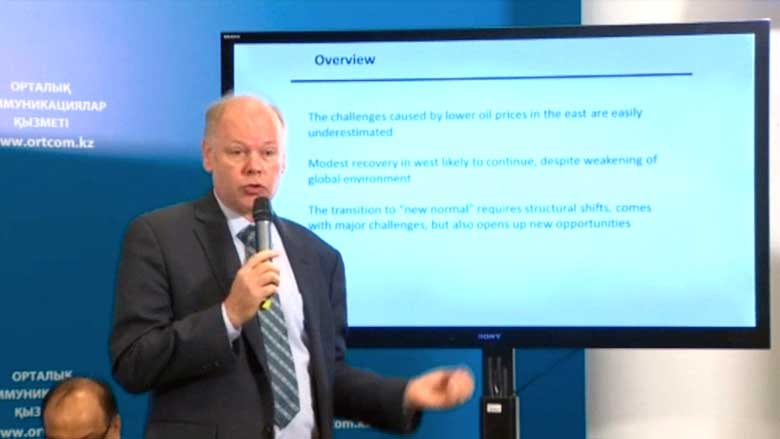