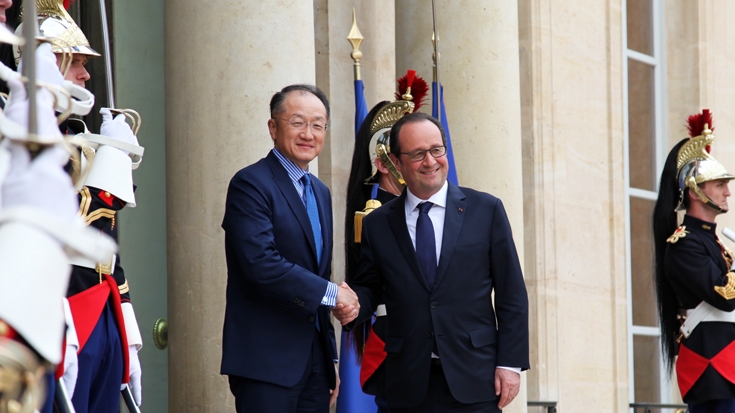 PARIS, April 29, 2015— During a meeting in Paris today, World Bank Group President, Jim Yong Kim and President of the French Republic, François Hollande, discussed the forthcoming Paris Conference on Climate, the importance of financing for development and the responsiveness of the international community during natural disasters.

The World Bank Group President welcomed the efforts of France which have contributed to changing the attitudes of developed and emerging countries to the issue of climate change. He also confirmed the commitment of the multilateral development banks to financing climate change, in response to the French President, who stressed its importance for a successful COP21. Noting that 2015 will be a pivotal year for these questions, Kim said:

"Climate change seriously affects development and the fight against poverty. The World Bank Group is well aware that without strong action, global warming could prevent the lifting of millions of people out of poverty and wipe out decades of development. "

Considering the Conference on Financing for Development to be held in Addis Ababa in July, Kim and Mr. Hollande indicated that new sources of funding for development are essential if we are to achieve the eradication of extreme poverty by 2030 and promote shared prosperity.

"The end of extreme poverty is within reach, but to achieve this ambitious target would require greater collaboration between governments, the private sector, multilateral banks and all development partners," said the World Bank Group President.

Kim also explained the World Bank Group response to the devastating earthquake that hit Nepal last weekend. "We were shocked and deeply saddened to learn of the tragedy in Nepal, with its terrible human toll and material destruction. We are in close contact with the Nepalese authorities, who have specifically requested our support to help carry out an assessment of damage and reconstruction needs in urban areas affected by the quake. The World Bank Group is a long-standing partner of Nepal and will do everything possible to help people through this ordeal. "

Kim and Mr. Hollande agreed to coordinate a response to the vast devastation caused by the earthquake that hit Nepal on Saturday.