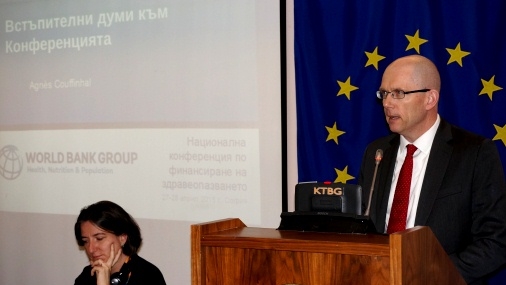 The event was opened by the Deputy Minister of Health, Dr. Adam Persenski, and the World Bank’s County Manager for Bulgaria, Tony Thompson (read his opening statement here). The Conference was attended by representatives from the Presidency, Council of Ministers, Ministry of Health, as well as representatives from, among others, the National Health Insurance Fund and the Bulgarian Drug Agency.

At the event, the World Bank team of experts presented findings from studies commissioned by the Government on Bulgaria’s Health Financing System, Pharmaceuticals, and Emergency Care, focusing on the sustainability and financial protection of the health care system.

The World Bank team of experts emphasized that Bulgaria has a modern, well-developed health care system, and the law sets to provide coverage to its entire population. Bulgaria’s health system embodies many of the global good practice features found in other advanced and, increasingly, emerging market countries.

However, the experts from the World Bank said that, similar to health care systems around the world, Bulgaria faces challenges with respect to the system’s performance in terms of health outcomes, financial protection, equity, efficiency, and sustainability.

Participants at the National Conference also discussed the Government’s proposed reform program, and how the experience of other countries could be used to inform its implementation and to improve the performance of Bulgaria’s heath care system.