South East Europe: Economic Recovery in Some, but Not All Countries, Says World Bank

BELGRADE, January 20, 2015— Devastating flooding in some countries brought the economy of South East Europe (SEE6[1]) to a standstill in 2014, with growth of only 0.2 percent, according to the World Bank’s latest South East Europe Regular Economic Report (SEE RER) launched today in Belgrade. 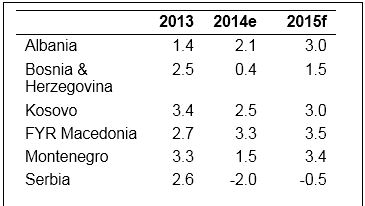 “External demand for SEE6 exports was a positive force for economic growth in 2014, despite the weak Eurozone performance and disappointing global recovery," said Ellen Goldstein, World Bank Country Director for South East Europe. "However, political uncertainty, and delayed or reduced investments exacerbated the effects of the profoundly devastating floods that hit the region in 2014.”

“Unfortunately,” Goldstein added, “growth of only 0.2 percent is insufficient to improve living standards or make a dent in the region’s high unemployment rate.”

The weak regional economic performance masks notable differences among the SEE6 countries, the report says.  Serbia is estimated to have contracted in 2014 for a third time since the global crisis, and Bosnia and Herzegovina is stagnating. Economic growth rates in Kosovo and Montenegro are estimated to have moderated in 2014. Only Albania and FYR Macedonia have shown signs of a more sustained recovery thanks to increasing exports.

The floods in May 2014 are estimated to have cost Bosnia and Herzegovina around 15.0 percent of GDP and Serbia around 4.7 percent of GDP in lost output and damages. Damaged power generation facilities hurt businesses in Serbia, and damaged crops harmed agricultural output in Bosnia and Herzegovina. Almost no segment of the economy went unharmed in these flood-affected economies. The significant impacts of the recent weather shocks in 2014 suggest that SEE6 countries are not well-prepared for the increased weather variation.

The report says that structural challenges continue to hold back potential growth in SEE6. Gallina A. Vincelette, Program Leader and one of the authors of the SEE6 RER, explains, “The functioning of the labor markets across the region is anemic with the persistently high unemployment rates, low labor force participation rates, and sluggish formal job creation. Even though some progress has been made in easing the burdens of the investment climate, there is still room for improvement. The public sector is large and inefficient in many countries in the region. Improved connectivity of the region through physical and institutional linkages among the SEE6 countries, to the European Union, and to the rest of the world, will help competitive firms from the region reach new markets and foreign investors come to the region.”

According to the report, in 2015, the SEE6 region is expected to recover modestly, with aggregate growth projected to average 1.3 percent.

Growth is likely to be held back in 2015 by a weak recovery in Bosnia and Herzegovina and Serbia. The rest of the region is expected to grow by over 3 percent in 2015, with economic growth reaching 3.8 percent in FYR Macedonia.

Growth prospects are dependent on external factors, including a sustained recovery of external demand, especially in Europe, and stabilization of international energy prices at around current levels.

Economic activity in SEE6 is dampened by weak domestic demand as consumer and business confidence remain weak over lingering political uncertainty, chronically high unemployment, and banking systems saddled with high nonperforming loans. Therefore, the report emphasizes that economic growth in the near- and the medium-term in SEE6 can be supported through sound and well-prioritized economic policies.

The SEE RER  is produced twice a year by staff economists in the Macroeconomic & Fiscal Management Global Practice of the World Bank’s Europe and Central Asia Region.  For previous reports and more information, please see here.